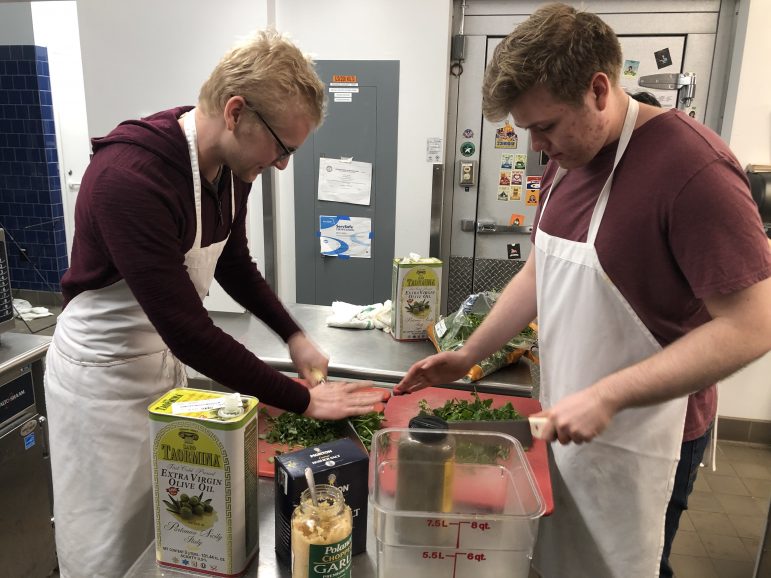 “Lemme tell ya, Isaiah is a mensch.”

When I asked Williams College Jewish Association (WCJA) co-Religious Director Melvin Lewis ’22 to tell me about Isaiah Krugman ’20, these were the first words out of his mouth.

Krugman is one of two Jewish Religious Center (JRC) kitchen directors, along with Claudia Inglessis ’22, who is away for Winter Study. His job, along with Inglessis’, is to prepare and serve dinner at the JRC after Shabbat services conclude there every Friday evening. Other people will also lend a hand, including members of WCJA board and outside groups recruited to help cook dinner. “He is the one in charge,” Lewis said. “If you challenge him, you’re being an asshole.”

Krugman said that it often feels like most Williams students don’t really know how to cook.

“Every week, I’m always teaching a new person how to chop an onion,” Krugman said. Indeed, according to Lewis, “Isaiah will frequently teach me improved ways of cutting vegetables.”

Despite occasional hiccups, Krugman said, “A lot of times, people really do come through, and it’s really helpful.” Reflecting on a recent group that helped him in the kitchen, Krugman said, “Not only was their labor extremely appreciated, but everyone had fun at the same time.”

Krugman said that he, too, has learned a lot from working in the JRC kitchen, particularly about Judaism as a religion and culture. “It sometimes feels like an ethnographic experience, as well, because I’m learning so much about Jewish culture at the same time,” he said.

One meal per week might not sound too difficult.  But Shabbat dinner, open to the entire College community, averages several dozen attendees every Friday.

Krugman is used to cooking. He picked it up around sixth grade, when his parents got divorced. His father “had no idea how to feed us — at all — so we just started watching the Food Network all the time,” he said.

When he first started, Krugman admitted, the food “was really bad.” But, with time, he gained confidence in the kitchen and began experimenting with bolder recipes and even creating his own.

Krugman credited these experiences with developing his “sense of intuition” in the kitchen. When asked to describe Krugman, one of the first things that came to Jewish Chaplain Rabbi Seth Wax’s mind was “gourmet.”

Working in the JRC kitchen, Krugman has realized that cooking for a large group is quite different from cooking for two. Before he can cook the meal, he has to plan it extensively, taking into account the size of the meal and available resources in terms of kitchen space, ingredients and people. All in all, Krugman spends about 12 hours working on Shabbat dinners every week.

Before becoming a Kitchen Director, “He was working in the kitchen for years without getting any credit,” Lewis said.

Krugman said his favorite part of his job is being with his friends. “When all of my friends are there, we’re cooking together, and trying to figure it out, and just having fun or laughing,” he said.

Of course, Krugman has had to learn how to deal with some difficult situations, too. “It’s generally a pretty organized operation,” Lewis noted, “but there’s still a lot of things out of his control,” whether those be a lack of sign-ups or ingredients that never arrive. Still, Wax said, “Even when things are getting hectic in the kitchen, he keeps his cool.”

If something can go wrong in the JRC kitchen, Krugman has probably dealt with it at some point.

Near the end of Winter Study last year, Krugman had to scramble to find new challah after he discovered ants had made their way to all the bread, which has religious significance, just two and a half hours before dinner.

Another time, Krugman had to remove a squirrel that had sneaked into the kitchen before it contaminated the food. He successfully trapped it inside a challah box and released it outside without harming the animal.

“We’ve never killed anyone so far — neither the food nor a kitchen accident,” Krugman said. “No one has died, so I would say that’s a pretty successful rate.”

“If you ever don’t like something at Shabbat dinner, it’s probably not [Krugman’s] fault,” Lewis said. “It’s probably someone else’s fault, unless you think it’s too spicy. If you think the food is too spicy, that’s Isaiah’s fault.”