One in Two Thousand: Petra Baldwin ’21 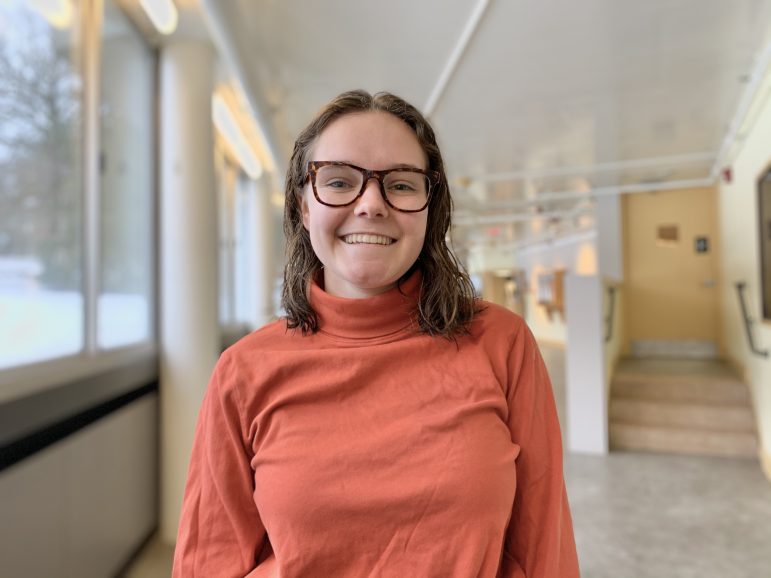 Each week, we randomly select a unix from a list of all current students at the College. So long as the owner of the selected unix is on campus, willing to be interviewed and not a member of the Record board, that person becomes the subject of that week’s One in Two Thousand. This week, the computer (using a very simple script in R) chose Petra Baldwin ’21.

My first question is how many times do you think you have listened to Hamilton?

Ooh, OK. Well, in order of the Hamilton cast, then Lin-Manuel Miranda, then Daveed Diggs, they were three of my top five Spotify artists so … many? [Laughs.] I can actually give you the number — wait — um — many. We’ll go with many.

What are you watching on Disney+ right now?

The Clone Wars, the animated series of Star Wars.

Are you a big Star Wars fan?

Yeah. But I started watching in Season Three of The Clone Wars, and now I’m going back to the beginning.

I heard a rumor that you’re sometimes called “Big Petra” on La Wufa [the women’s Williams Ultimate team]. Tell me about that. How’d you get that nickname?

Cool, and what do you do on La Wufa? Have you been a member of the team for a while?

I actually joined last year, so my sophomore year. I was kind of affiliated with the
B team freshman year, but then decided I wanted to play more because it was way more fun than I was expecting, and it’s just a fun group of people.

I see you’re wearing donut socks right now. Do you have any other kinds of novelty socks?

I have many socks. I’m a big sock fan. I think my favorite ones are cow socks. I got them online, and they’re cows with flowers. It said they were purple — turns out they’re hot pink, but they’re still fun.

What’s this I hear about you having a velvet robe?

[Laughs.]That is also a “Big P”  costume for Ultimate. I’m the official grill master for the year, so that has been passed down. It has pockets — the best part of it — but it’s mostly just a fire hazard, I’ve realized. It’s not very effective for actual grilling.

Mostly, I’ve met Ravenclaws — and quite a few Slytherins.

I think [my co-Junior Advisers] Lydia [Duan ’21] and Will [Cozadd ’21] are also Hufflepuffs, which is interesting. Abe [Eafa ’21, another co-JA] had not taken the test. That’d be a fun snacktivity. I don’t know — I just vibe with it. I also have a pair of badger socks. Those are my second favorite. I just feel like the Hufflepuffs are so underrated. They’re just really amazing good people, not that I’m that, but I aspire to be that. I feel like it’s — I read some long fan theory thing about how sorting is not necessarily what you are but what you value and want to be, and I feel like those are things I value.

Cool! What do you like to cook over the summer?

Ooh. Lots of vegetables, because I worked a little bit last year, but mostly two years ago, at Peace Valley Farm and would get a bunch of squash and zucchini and stuff and would just make those. I made a lot of muffins.

Is that your favorite recipe?

You lived in a lot of places growing up. What was it like moving around and having your dad work for the government?

Really good. Overall, I’m really happy about it. I was born in Seattle, and I would actually go back every summer. Having that kind of actual home was really nice. When I was really young, we were in Latin America, and for middle school and high school I was in China. I think, with all the moving, being able to then from those places just travel around — I just feel really fortunate to have been able to do that. But then also, with moving so often, leaving friends behind, I don’t have that many friends from middle school and high school that I keep in touch with.

Do you have a favorite place that you lived?

I think Ecuador. Maybe it’s just that I was six, and I was really happy as a child, but I loved Ecuador so much. I really want to go back.

Last but not least, what is your favorite form of potato?

I think potatoes and eggs are the two perfect foods because they’re so versatile. But, mostly because I had them at Mission brunch, I think tater tots.