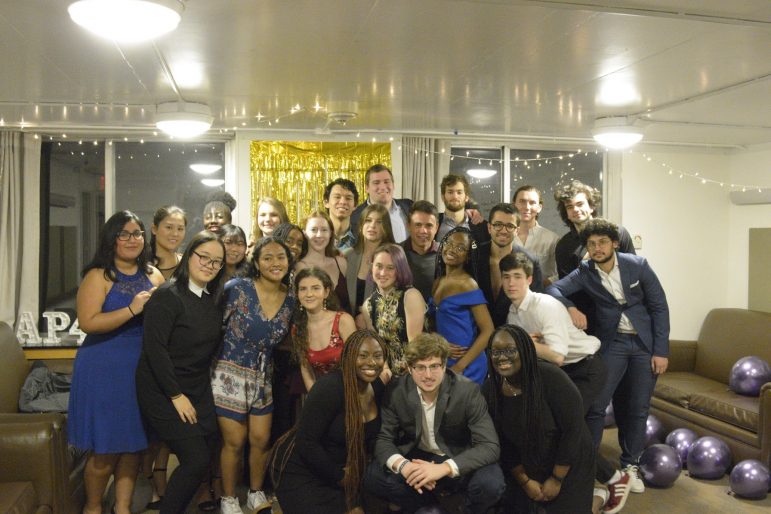 The Armstrong-Pratt 4 entry poses for a photo before their formal. The theme was “a 4tnite in Paris.” PHOTO COURTESY OF PETROS MARKOPOULOS.

A Fortnite-themed backdrop adorned the wall of the fourth-floor Armstrong common room Thursday night as dozens of students crowded the halls, talking and posing for photos. A “night in Paris” and the popular video game Fortnite inspired the theme of the first-ever “AP4mal”: “a 4tnite in Paris.”

Members of Armstrong-Pratt 4 (AP4) decorated the Paris-themed Pratt common room with fairy lights and gold streamers, and each common room had party favors on the kitchenette tables, including temporary tattoos and Fortnite stickers. Partygoers put on dressy attire, just as they would to a more traditional formal, and the entry’s Junior Advisors (JAs) held cameras and took pictures of the partygoers upon request.

“I think that our entry is really tight, and we love to have fun and see other people having fun as well,” said Grady Short ’23, one of the AP4mal organizers. “You know, I think the possibility of a pun really made it inevitable that this would come about.”

“His entry, AP1, had done an entry formal my freshman year that I had gone to with my friends,” she said. “He had brought it up really early. We had been talking to the frosh about it for quite a while… We definitely thought about it from the very beginning of the semester.”

Although the idea for the AP4mal came from the JAs, the first-years in AP4 had a significant role in planning it.

“When we came back from winter break, the four of us sat down at ’82 [Grill] to talk about how we were going to plan it, so we decided to create a committee of a couple of the frosh to lead,” Nyarko said.

To get the word out about the formal, members of AP4 created graphics that they posted in the Class of 2023 GroupMe chat. Short added that much of the publicity also came from members of the entry talking to their friends in other entries and posting on Instagram and Snapchat about it.

The night of the party, students from AP4 also marched across Mission Park inviting everyone they encountered to come upstairs.

While most formals at the College are restricted to the members of a specific club or team, Short mentioned that the AP4mal was meant to be an all-inclusive event, open to anyone in the Class of 2023.

The annual Frosh Formal, which was organized and funded by the Freshman Council, took place on Saturday, just two days after the AP4mal.

“I think they fulfill fundamentally different needs,” Short said. “One is theme. Frosh Formal by its nature is meant for the whole grade, and it’s put on by representatives of the whole grade, so it needs to cater to a more broad range of tastes. I think that our ability to have a theme that is literally ‘an AP4tnite in Paris’ is really something, and I think it goes a long way towards showcasing the quirkiness of AP4 in particular as an entry.”

Julia Peabody ’23, who is in AP4, added that the formal is probably more intimate than Frosh Formal “because it’s in an entry and people’s rooms are open, and it’s probably less well-known.”

Students came from other entries in Mission Park as well as Frosh Quad to enjoy the formal. “I was expecting it to be like any other party at Williams,” Weiwei Lu ’23, of MD4, said, but added that “AP4mal was more organized than I expected.”

Nyarko said she was satisfied with the outcome.

“It brought people’s friends from outside of the entry together to mingle and have fun,” she said. “That’s what it was all about for me, just bringing people together to enjoy each other’s company in a time when people have a lot of free time.”

First-years from other entries had a range of reactions to the AP4mal. Julian Speyer ’23, of AP3, said that he was neither “underwhelmed or overwhelmed.”

His entrymate Rachel Buccalo ’23 was more enthusiastic. “It was great!” she said. “Everyone was really welcoming and friendly.”