Former prof. Kurt Tauber reflects on time at the College 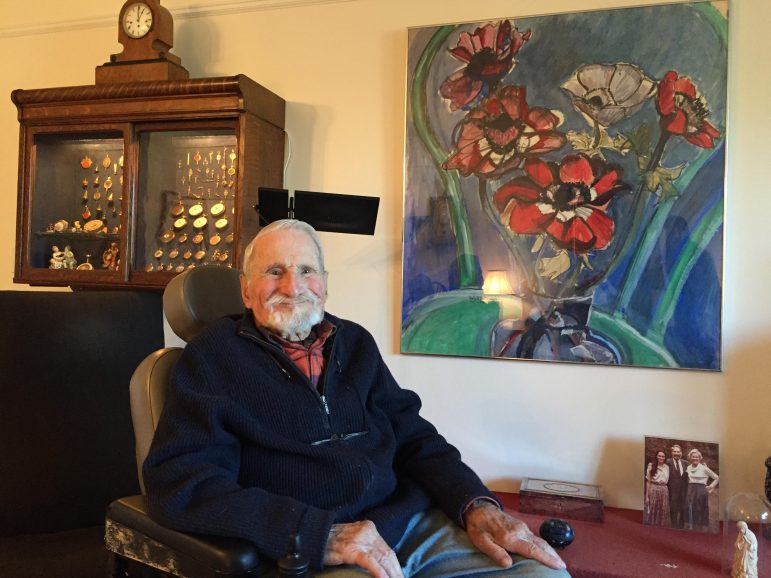 Kurt Tauber was a prominent member of the College’s activist community during his 33 years as a professor of political science. (Nigel Jaffe/The Williams Record)

Once I started writing for the Record, I occasionally received emails from alums who saw my byline and wondered if I was related to their beloved Marxist professor, Kurt Tauber. Last spring, I was about to reach out to Tauber myself when I got an email from him asking if we were long-lost relatives. I drove out to meet him at Sweetwood of Williamstown, a senior living community a few miles down Route 7, and while I did not discover a new family member, I did find a living archive of the College’s history.

“This place is loaded with Williams deadwood,” Tauber said, referring to himself and to the many other professors emerita, alums and parents of alums — among them former President of the College John Wesley Chandler — who live at Sweetwood.

Tauber, who turned 97 this fall, taught in the political science department from 1960-1993. He came to the United States as a refugee from Nazi-occupied Austria and received his doctorate in international relations and political theory from Harvard.

His history hangs on the walls of his home. Vestiges of what Tauber called an Austrian upper-middle-class “chandelier culture,” such as an ornate portrait of him as a boy in Austria, are mounted alongside a poster calling for the defeat of capitalism and bookshelves full of works by Karl Marx and other political theorists. According to Tauber, the Vietnam War radicalized him, turning him from an “FDR liberal” into a Marxist.

When he first got a call to come to the College for an interview, he was uncertain. “At Harvard, Williams had a very problematic reputation… as a rich-boy school, a prep school,” he said. “Amherst was seen as a rustic college, but a college. Williams was not.”

Tauber called a friend who had attended Williams to inquire about the College’s reputation. “He says, ‘Which Williams would you like to talk about?’ I said, ‘How many Williams are there?’”

Tauber’s friend told him of two Williams Colleges: one when he graduated in the early 1910s, and another when his sons graduated in the 1950s. “When I went to Williams … I learned a very good game of golf, I enjoyed the place, and I don’t remember if I opened a book,” Tauber recalled his friend saying. In contrast, the sons returned from school in the ’50s with backpacks full of books. “So those are the two Williams,” Tauber said. “So, on the assumption that the second Williams was still going on and books were still being read, I said yes.”

When Tauber began teaching in the ’60s, the biggest change he saw at the College was an increase in socioeconomic diversity. “The triumph was that Williams broke the 50 percent mark of non-prep school students, so before that virtually everybody… was white, upper-middle-class, well heeled, prep-school-trained students,” he said.

Tauber also taught at the College when the first female students were admitted. He recalled an almost exclusively male faculty and staff that were unsure of what to expect with the introduction of women. One anecdote from that period came when the College asked one of the few female staff members to inspect the first women’s bathroom. “She said she walked in there, and it was all painted in pink,” Tauber said. “We assumed that all the women would be psych majors and anthropology majors… The first or second generation of women were out to prove something, out to prove they were better than the men. And they were!” Tauber also remembered the start of federal requirements requiring racial diversity; at one point he served on the Black Student Life Committee.

Outside the classroom, Tauber took part in various protests alongside his students over the years. “That was the best time I had — I was an activist myself,” he said. “When the students were marching to end [the war in] Vietnam, or when I was sitting with them on the steps of Hopkins Hall preventing the entry of CIA agents who were on campus to recruit. We wouldn’t let them recruit — that was fun.”

Tauber lamented that the activism ended with the draft. “To my disappointment, I discovered that the unpopularity of the war among the students was mostly because of the draft,” he said. “I remember when Nixon discontinued the draft, suddenly the fervor of the student body was used [up].”

Tauber also criticized the low level of fervor of Williams students compared to those at other colleges and universities. “Students were running around with cartridge belts, a thing that would have been unthinkable at Williams,” he said. “Williams was always polite. When students occupied Hopkins Hall, they occupied the president’s office, but before leaving the president’s office, tidied it up.”

Almost 60 years after Tauber started working at the College, he maintained his institutional criticisms. “I think they don’t know what to do with their money,” he said. When asked what the College should do with its money, he had one answer: “Free tuition.”

Although he sat side-by-side with students in protests as a faculty member, Tauber questioned contemporary activism at the College. “I’m ambivalent — I have very little patience with identity politics and think it’s a bourgeois fad,” he said. “But at the same time… I can just imagine somebody coming in from [the] working class, whose parents had never gone to college, and he suddenly comes to Williams, this must be a shock, and I think that student needs support, so I can see why he or she would be upset. I can see how he or she might feel unsafe, although the notion of feeling unsafe I have difficulty with.”

Despite some of his criticisms, Tauber’s face lit up when asked his favorite part about working at the College. “More than anything else, I loved students coming into my office, which wasn’t easy for them because I was a pipe smoker,” he said. “It was an absolute delight. I loved it.”