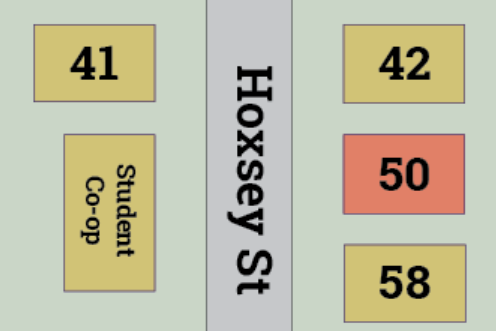 On Hoxsey Street, all three of Williamstown’s major stakeholders — town residents, students and the College — come together. Located in the geographic center of campus, the street is a perfect example of the gray area between on-campus and off-campus, the College and the town. After large student parties have raised tensions between student residents and local Williamstown landlords, questions and concerns over who is responsible for managing the space have come to the fore.

Carol DeMayo, a longtime landlord on Hoxsey Street who rents to non-students, is upset with how the space is being used, and she says she is not alone. For DeMayo, responsibility lies with the students living on the street. In the past few years, she said they have become ruder and less responsive to her requests to moderate noise and trash on the street. “The College is trying to do the right thing,” she said. “The student’s lack of consideration and adult behavior is causing the problem.”

DeMayo raised the annual daytime party known as “Sensations Hoxsey” as a specific trigger point for disrespect and lack of neighborly care, citing trash that stayed on the road for weeks, the inability of EMS services to access the street and a “dead couch out on the lawn” that stuck around for a few months. She even recalled stepping out of her house one morning to see “some guy urinating.” “Aren’t they supposed to have a little bit of respect?” she said.

To address these problems in the past, DeMayo said, neighbors could call Campus Safety and Security (CSS) regarding noise, “but now you have to call the actual police, which people are far more reluctant to do.” Although in her opinion the College is not responsible for regulating student behavior on the street, DeMayo said she believed that if a resident came to the College with a specific complaint, it would respond.

The College, however, views the situation differently. Matt Sheehy, associate vice president for finance at the College, said he sees the College’s role as one similar to any other landowner on the street. For him, Hoxsey Street represents opportunities for the College’s real-estate portfolio to grow. The College recently put in an unsuccessful bid for the property at 66 Hoxsey Street, which Sheehy said is strategically important to the College because of its proximity to the campus. He said that the College is “in extreme need of residential housing for faculty and staff” that would allow more professors to live within walking distance of the campus and business district. With properties that fit these geographic stipulations in limited supply, Sheehy was clear that the College will continue to pursue purchasing opportunities. “If another property similar to 66 presents itself, the College would be interested,” he said.

Yet Sheehy and the College “are more mindful of [their] role” in the community than they were even five or ten years ago, Sheehy said. He is sympathetic to concerns that by buying more and more plots that surround the campus, the College is artificially inflating the housing market and perhaps negatively affecting community members. Still, Sheehy’s focus is on the professors: housing market inflation has a “trickle-down” effect for staff and faculty.

Even DeMayo acknowledged, perhaps reluctantly, the College’s power in the town’s housing market. “They will probably own my property someday,” she said. “I guess there’s not very much I can do about that.”

From the perspective of some students on the street, it makes sense that townspeople are feeling the burden of living next to the main party area of campus. “It’s not exactly an idyllic neighborhood, so it feels unrealistic to expect a normal neighbor relationship,” said Jack Consenstein ’20, who lives in 70 Hoxsey. He said he believed the lack of other social party spaces is partially to blame. “At a certain point, it is the one off-campus space close to the College, so it’s the only place that students can go to be social or party without fearing the repercussions of CSS and the College,” he said. Consenstein said he that does acknowledge some responsibility for parties on the street and that he would be willing to “address specific concerns if a neighbor brought them up.”

Some residents of Hoxsey Street bridge the gap between town and Gown. Jason and Lara Meintjes, both ’22, are transfer students who are renting housing on Hoxsey Street from the College. Jason noted that he was concerned early in the year about the bouncy house and fireworks but said that he could not get too angry with students for carousing. “I was probably the type that would have been at all of those parties and been making all of that noise,” he said.

Lara said she likes living on Hoxsey Street. “There’s just enough noise to make it feel like home,” she said. “Otherwise it would feel weird.”