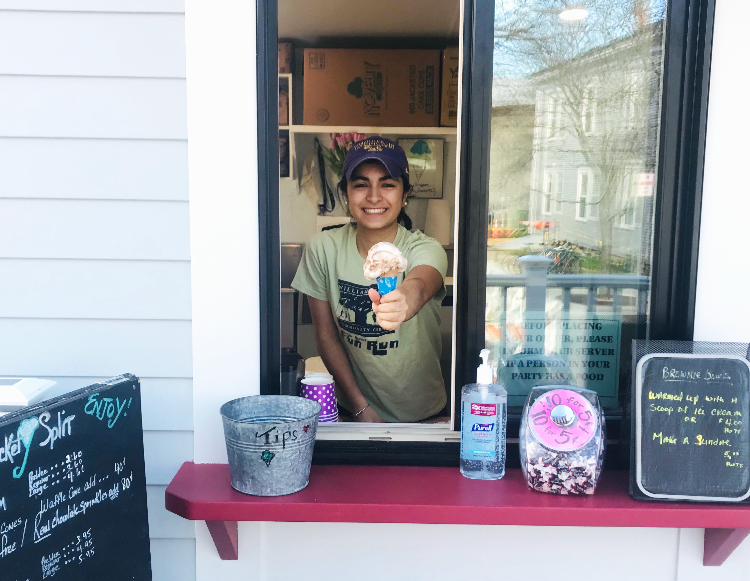 Williamstown native Niku Darafshi ’21 works at Lickety Split, a job she has held since before college. (Photo courtesy of Niku Darafshi)

Williamstown native Niku Darafshi ’21 does whatever she can to avoid going home or seeing her family during the school year. “Once, I left my favorite jeans at my house and refused to go get them or have them dropped off,” she said. “If they have some of my favorite food as leftovers, though, that I can’t say no to.”

There are currently between 35 to 40 students at the College who hail from the Berkshires. In the class of 2019, there were five students from Williamstown and three from Pittsfield.

Many of these students have lived in the area their whole life, and for some, the College was just another part of their community growing up. A few from Williamstown, including Leah Majumder ’22 and Mae Burris-Wells ’22, attended the Mount Greylock Regional School just four miles down the road for some or all of middle and high school. Jacob Lezberg ’20, from Pittsfield, said he came to Hopkins Observatory on a field trip in elementary school before he even had a concept of what the College was.

Ironically, some students from the area at first decided they wouldn’t attend the College, but they changed their minds during the search process. “I really swore I wouldn’t go here,” Majumder said. “My older brothers said the same, and then they ended up getting out, but then, when it was my turn, it was really hard not to subconsciously compare everywhere else to Williams.”

“I actually grew up saying I wouldn’t come to Williams,” Darafshi said. “I was very excited to get far away from my parents. I ended up [at the] last minute throwing Williams onto my college list since everyone else was applying.”

Some students didn’t have a sense for how the College compared to other schools growing up. “Before looking at schools for college I really had no idea how special Williams was in terms of academic rigor and prestige,” Ilana Albert ’21, from Pittsfield, said. “I basically only thought of Williams as a place where I attended a soccer camp every summer.”

During the application process, the College began to stand out as a strong contender. “I wasn’t originally going to apply to Williams at all but when I went away [to boarding school] I kind of missed it and I realized it would be a good option for me,” Burris-Wells said. “I applied to a bunch of different places but I ended up feeling like this would be the best place for me out of my options.”

The timing of Previews and the College’s size also played a part in making it stand out. “Of course Williams Previews was the last [admitted students’ day] to occur and the one I enjoyed the most,” Darafshi said. “I felt the most comfortable and accepted with the students here and realized I would get the most attention and resources given to me if I came here over the larger schools on my list.”

For others, it is sometimes difficult to separate home life from school life. “I feel like I have to be on my best behavior at all times since this town is so small and everyone knows everyone,” Darafshi said. “Anywhere I go, I will recognize someone, and word will spread back to my parents.”

But these students’ relationships to the area are certainly changing as they spend time at the College. “Once I’m ‘at college,’ I see the town totally differently,” Majumder said. “I think it has a lot to do with who I’m with. Like, it feels totally different to be on Spring Street with college friends than it did when I was in high school.”

Students from the area, or “townies,” as Majumder’s friends sometimes call her, gain new perspectives on the area as they become adults here. Burris-Wells agreed, saying “my relationship is more … adult with [the area]. I don’t go shopping with my parents anymore. I do stuff on my own.”

If anything, growing up in the Berkshires and then becoming a student at the College has only strengthened these students’ connections to the area. “Since becoming a student here, I have gained a new appreciation for just how beautiful the Berkshires are,” Albert said. “I think seeing some people experience fall and winter for the first time really lit another fire in me about how lucky I am to be surrounded by such a beautiful environment.”

As a student at the College, Darafshi has gained many new perspectives on the area. “I think I have become a lot more aware of the issues happening in the community,” she explained. “I have also realized how great an influence Williams has on this community, not just as an educational resource but as a political driver and a source of economic development in the town. I still love Williamstown, but I am so glad to now be part of this diverse community which looks more like me and has a lot of influence to effect change for the better on this community.”

While it may not feel entirely different from growing up in the area, going to the College still gives these students an education and new friendships just like anyone else. “I wonder a lot about if I’m missing out by not moving to a new place,” Majumder said. “At the end of the day, though, the college experience is still very much the college experience.”