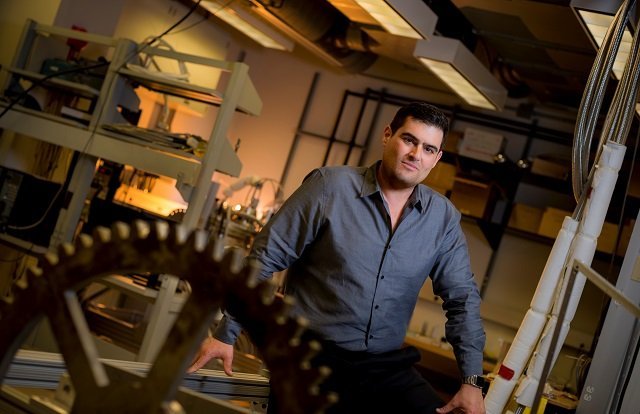 In his lecture, Keating discussed his physics research and critiqued the Nobel Prize selection process. Photo courtesy of USCD library.

On Friday, physicist and University of California San Diego professor Brian Keating visited the College to discuss his recently published book, Losing the Nobel Prize, about his attempts to find traces of gravitational waves from the very early universe. The telescope that Keating helped design and build, BICEP2, reportedly found evidence of these waves in 2014, placing Keating in contention for a Nobel Prize. However, later analysis revealed that it was possible that these signals were caused by intergalactic dust, invalidating the findings. Keating lectured on his passion for astronomy, his trip to Antarctica to build the telescope and the problems he sees with the Nobel Prize selection process.

Keating was first introduced by Jay Pasachoff, professor of astronomy at the College and the author of numerous astronomy and physics textbooks. Keating began by thanking Pasachoff, to whom he attributes his passion for astronomy. “He was really my first introduction to astronomy,” Keating said. “Without him, I wouldn’t be an astronomer, in all likelihood, because it was his A Field Guide to the Stars and Planets… that really served as an inspiration to me when I got my first telescope at age 13.”

Keating described the boundless nature of the universe as an inspiration of his. At one point, he shined a laser on a corner of Wege Auditorium, where he was speaking. “In any direction you look, within this laser’s mark, you can see several thousand galaxies, each one with billions of stars,” he said. However, the vastness of the universe all originated from a single point: the big bang. “[Physicists] weren’t looking to find the big bang; they found it serendipitously. And I believe that those are the greatest discoveries,” Keating said.

However, much about the big bang is still unknown. In building the telescope BICEP2, Keating hoped to show evidence of a theory of the early universe called inflation, which would provide a glimpse of what he called “the first birth pangs of the big bang.”

The telescope, which worked by detecting tiny traces of heat from the early universe, needed to be placed in a cold region. “You wouldn’t put a microwave telescope, detecting traces of heat, in a hot place in Southern California, despite how easy that would be for me or my family,” Keating said. Instead, the telescope had to be built at the South Pole, where Keating ultimately travelled.

First, he travelled from New Zealand to McMurdo Station, on the edge of Antarctica. “It looked like a cross between a strip-mining base and – what’s your guys’ worst enemy? Bowdoin?” he said. The South Pole itself was even more desolate. “There’s no place to get clothes at the South Pole,” Keating said. “There’s no Wal-Mart. You have to bring them yourself, and the clothes have to be bright, so they can find your body if you die.” Referring to his living quarters at the South Pole station, he said that “it was smaller than a California State Penitentiary cell.”

At first, it appeared that Keating’s work was rewarded with clear evidence of the gravitational waves that he was looking for, upending the scientific community. “We were all whispered as being surefire Nobel Prize contenders,” he said. However, he and others ultimately realized that their results could have been a false signal created by interference from intergalactic dust. Keating partially blamed confirmation bias for the original misinterpretation. “We set out to see something, and we saw it,” he said. After finding what they had been originally looking for, Keating said, he and others were less likely to skeptically analyze the data. “People see [scientists] as perfect meat robots with no bias, but that’s not true,” he added.

Looking back, Keating is not surprised that intergalactic dust interfered with the data. “[Astronomers] are looking through a dirty, dusty windshield,” he said. “In a way, dust is Janus-faced: it can build planets and it can destroy Nobel Prizes.” Indeed, the loss of the Nobel Prize served as a turning point in Keating’s outlook, as well as the inspiration for his book title. “It caused me to reevaluate my animating impulse, which was to win the Nobel Prize, really at any cost,” he said.

Not long after, Keating was asked by the Nobel Committee to nominate recipients for the following year. Keating framed his frustration in terms of college rejections. “Imagine this lovely universe where you don’t get into Williams, and you get sent a letter saying, ‘Well, you didn’t get in, but do you know anyone who would be good?’ That’s what it felt like,” he said.

Keating has since focused significant energy toward addressing perceived flaws in how the Nobel Prize is given out. He pointed out that only two women have ever won the Nobel Prize in physics, and none since 1963. Additionally, he criticized the current policy that prevents people from receiving the prize posthumously. At one point, he even described the Nobel Committee as monopolistic and concerned with the preservation of its own power over the advancement of science. “It’s an all-powerful monopoly, and I think it should change,” he said.

One solution that he has suggested is allowing more people to participate in the selection process. “My identity was meant to be concealed for 50 years,” he said, referring to his status in submitting candidates for the prize. To him, that dynamic makes it less likely for marginalized scientists to win the Nobel Prize and makes the field a more insular and less welcoming institution. To combat this, Keating has created a website, https://losingthenobelprize.org/, which allows anyone to suggest future Nobel Prize winners. “We must use the allure of this medallion to benefit scientists, especially young scientists and underrepresented scientists,” he said. “My plan is to contact people I know on the Nobel Committee and lay a stack of petitions on them, so that it can be changed for its own good.”