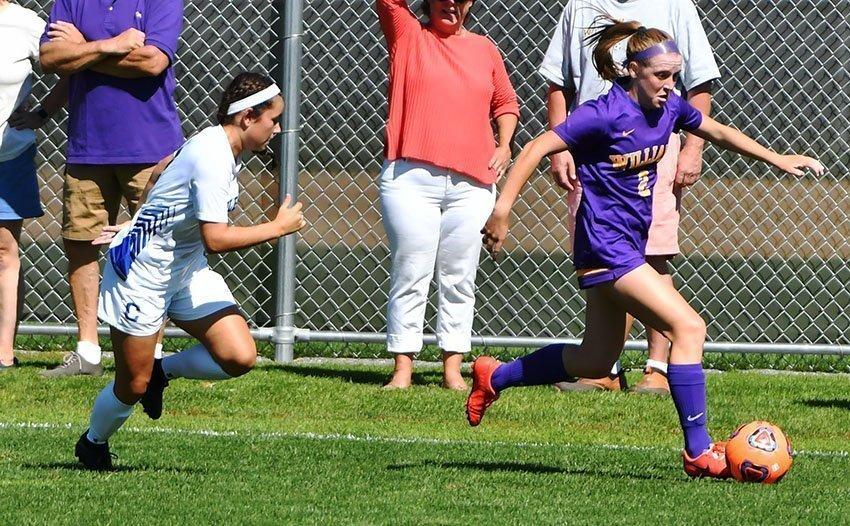 Women’s soccer (5-0, 3-0 in the NESCAC) extended its win streak to five by shutting out Springfield and Colby over the weekend.

Against Springfield, Victoria Laino ’21 scored the game winner at 51:57 after Sarah Kelly ’20 sent a beautiful pass from 20 yards outside the penalty box to within five yards of the goal. There, Laino slid and volleyed the ball into the net to give Williams a 1-0 victory.

The Ephs created two scoring opportunities early in the first half. At 2:51 and 6:45, Sydney Jones ’21 ran by several defenders to get two open shots, but both attempts were blocked by Springfield goalie Jackie Davis. The two shots by Jones turned out to be the only scoring opportunities of the first half. Timely headers and clutch saves by Springfield kept the game scoreless.

“It was a tale of two games in many ways,” said head coach Michelyne Pinard. “Things weren’t working for us in the first half, and I think we were feeling a little sorry for ourselves. It was nice to see our fight in the second half.”

Bolstered by a pep talk at halftime, the Ephs took control early in the second half. Fullbacks Liz Webber ’20, Maria Chapman ’22, and  Kelly suffocated Springfield’s offense, allowing the rest of the team to blitz the opposing defense. In the 50th and 51st minutes,  Kelly sent two perfect passes into the goal box, one of which resulted in a Williams goal. At 56:17, Jones nearly scored after dodging defenders to dribble one-on-one against Davis, but again Davis made a nice save. Although the Ephs did not add to their lead, the difference in offense was noticeable.

In the final minutes, Springfield seemed to finally develop counter as the Pride earned a pair of indirect free kicks off two Eph fouls. Springfield shot both into the goal box, but one was cleared by a Williams defender, while the other went wide right of the goal. The Ephs stalled for the last few seconds to earn their fifth victory. The Ephs finished with a 16-7 advantage in shots on goal.

The Pride’s Davis allowed one goal the whole game, and had nine saves. Goalkeeper tri-captain Olivia Barnhill ’19 recorded two saves in the shutout.

On Saturday, women’s soccer capitalized on an early goal to win 1-0 against Colby. Continuing her impressive early season offensive run, Jones scored the only goal of the game at 10:12. A clearance from the Colby goalkeeper gave Williams possession at midfield, where Natalie Turner-Wyatt ’19 collected the ball and made a pass through the Colby backline. The agile Jones avoided the defenders, cut left to dodge the goalie and buried the ball in the net.

“Our ball movement allows our target to get a lot of scoring opportunities,” noted Pinard. “And she [Jones] is doing an incredible job converting.”

Jones pressured Colby early, forcing them back to its own end line often. The strategy netted Williams eight corner kicks and 12 shots on goal in the first half.

A free kick late in the first half saw Colby’s only real opportunity to score. An indirect free kick to Colby midfielder Mannon Frykholm gave her space to dribble near the penalty box. She drew Eph defenders and then sent a pass to Katie Senechal, but Senechal’s shot sailed high.

The second half was back and forth as both teams worked hard to establish control of the game. The Ephs persisted, however, and with finely tuned play they nearly doubled their lead. In the 85th minute, Georgia Lord ’21 and Jones darted into the penalty box as the ball came loose. Lord pounded the ball towards the net, but Colby goalie Shannon Gray dropped to the ground to block the shot. The ball then ricocheted to Jones who hammered it towards the middle, but Gray recovered and made a diving save. The outstanding saves by Gray kept Colby within one. In the final minutes, the Ephs maintained possession for long stretches to claim the 1-0 win.

The Ephs travel to Amherst on Saturday to play their rival at 12:00 p.m.