Mia Lisette wins ACE and WCFM Battle of the Bands 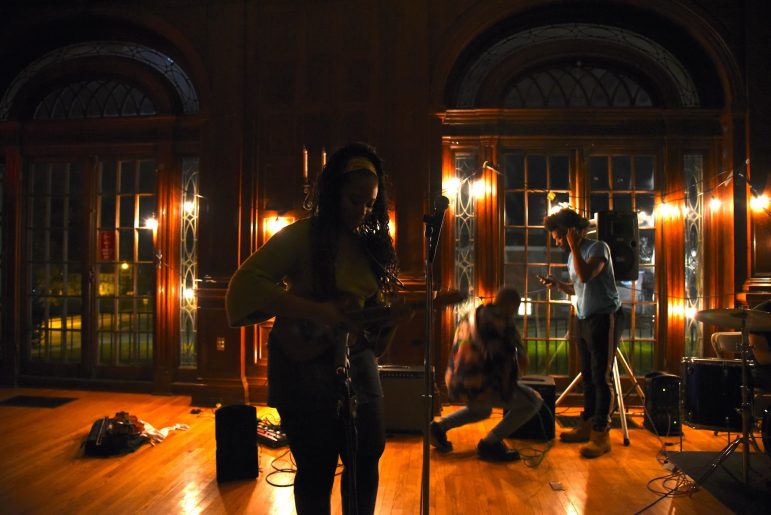 On Saturday evening, dozens of students filtered into the dimmed Currier Ballroom to watch four College bands perform in the All-Campus Entertainment and WCFM 91.9 Battle of the Bands. Mia Lisette ’20 and her band, composed of Adrian Oxley ’20, Rachel Porter ’21 and Kai Soto-Dessen ’22 took home first place, solidifying its place as the opener for this year’s Spring Fling.

The competition began with a transcendental performance of Beyoncé’s “Halo” by Olema (Lizzie Ferguson ’22) complemented with copious flourishes of reverb and astonishingly stacked loops. From there, the stage of excellence was set, and the rest of the performers continued to infuse their individuality and beauty into the space. Following Olema, Trouble Child (Lily Goldberg ’22, Lizzie Ferguson ’22, Kai Soto-Dessen ’22, Noah Nsangou ’20 and Isaac van Aelstyn ’21) delivered a “country-funk” two song set that inspired dancing from the crowd. After the first two performances, the audience voted on Kahoot, choosing Trouble Child as the winner of the first matchup.

Next, a matchup between Adriiian (Adrian Oxley ’20) and Mia Lisette took place. Adriiian’s two songs melded his self-produced beats with smooth lyricism and moments of freestyling. Mia Lisette then transitioned the space to a more relaxed aura, coupling her vocals and ukulele chord progressions with Adriiian’s raps. Once again, the crowd voted, solidifying Mia Lisette and Trouble Child in the final round.

During the final matchup, Trouble Child performed “The Wrong Thing to Do,” a jazzy, slowly-building track that culminated in a dance track. Then, Mia Lisette took the stage once again and performed a stripped-down song called “Renaissance of Love.” After a final round of voting, Mia Lisette was designated as the victor of the Battle of the Bands and the opener for this year’s Spring Fling.

Battle of the Bands was an initiative re-vamped by ACE and WCFM 91.9 in hopes of garnering attention to campus bands in addition to beginning the excitement for Spring Fling earlier this year. While Mia Lisette’s group will open for this year’s Spring Fling headliner, both Mia Lisette and Trouble Child will be invited to compete in a winter version of the Battle of the Bands ACE is planning in accordance with area colleges, with broader aims to create a connective tissue between NESCACs and other colleges in the Berkshire area in regard to the music and arts culture.

Editor’s note: The writer serves on ACE’s concert committee and serves on the board of WCFM.