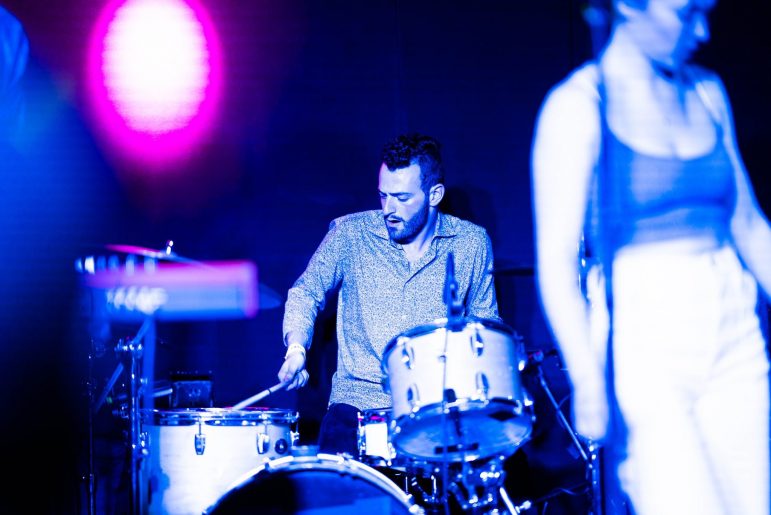 Josh Greenzeig ’20 hits a snare for Melt, which completed a run of shows last weekend. Melt’s single, “Stupid in Love,” is its first since 2018. PHOTO COURTESY OF MELT THE BAND

When most students ask professors for extensions, it’s because life — in the form of family emergencies, sleep-deprivation, unexpected surprise birthday parties — has gotten in the way. In the case of Josh Greenzeig ’20, “life” is a three-show tour spanning 428 miles with a seven-piece band. Greenzeig is the drummer for Melt, a genre-defying jam band based out of New York City. Last week, Melt released its latest single, “Stupid in Love,” a guitar-driven ode to heartache.

Melt was formed in 2017 by high school friends Eric Dickstein (keyboard and vocals) and Veronica Stewart-Frommer (vocals), and has since expanded to include saxophones, trumpets and even siblings — Greenzeig’s brother, Alex, joined Melt as a supporting guitarist on their recent run of shows. Greenzeig himself joined Melt his freshman year at the College. “I ended up meeting Marlo [guitarist Marlo Shankweiler] at the Stanford Jazz Workshop, so that’s how I got pulled in as a friend of a friend,” said Greenzeig.

It was love at first jam — Melt’s mix of trained jazz musicians and more pop-influenced artists has allowed for a delightful eclecticism in style, and a commitment on the part of the band to workshopping and experimenting with new material. “The first time I played with Melt was the basement of a house party,” said Greenzeig. “We were just jamming, and we just went into a really fast part of the jam which later became [our second single] ‘Inside.’ It’s very spontaneous in that sense, and we do a really good job of workshopping so that things that were one off ideas could become integral parts of the song.”

“Stupid in Love,” Melt’s fourth studio single, was developed through similar workshopping. “One of the reasons ‘Stupid in Love’ is such a guitar-driven song is that there’s a repeating riff that goes under the vocal melody, which came as our bass player [Lucas Saur] just messing with the bass line,” said Greenzeig. “Instead of trying to fight against the bass line, I started playing it in my playing, then the guitar started doubling it, and suddenly the song was a totally different vibe.” The effect of this playing in unison is delicious cohesion, a special treat in a band whose sound more often explodes into keys and horns and individual parts. “Whereas in some of the other songs we’re always looking for things to add, a lot of this song was taking things away, which was an interesting approach,” said Greenzeig. “We were really thinking about what would serve the song.”

“Stupid in Love,” is Melt’s first single in more than a year and a half. “We haven’t put out any music since April 2018, so we’re really excited to have more content out there,” said Dickstein. One of the challenges of recording and releasing singles is the sheer spread of Melt — the band is scattered throughout many states, which poses some difficulties for building in time to play together. “One of the hardest things about this band, but potentially one of the benefits is that we’re all at different schools during the year, so that’s definitely posed some challenges for coordinating rehearsals, but it’s also extended our night work into many different cities,” said Dickstein, who attends Georgetown University in Washington, D.C.  “Eric is our Southern boundary, and I think I’m our Northern boundary,” said Greenzeig. Right now, the band is even more spread out than usual, as Dickstein is studying abroad in Dublin. “I have actually had some people know my band here, which is cool. Pretty surprising,” said Dickstein.

Unfortunately, Irish fans of Melt probably won’t get a show too soon, since the band tours chiefly on the Northeast, playing their own rooms as well as supporting larger acts.

“The optimum is two weekends a month — we haven’t necessarily maintained that at all times, but last fall we did a couple gigs a month,” said Greenzeig. “We did our first extended run of shows this summer, which was a great experience.” On their recent run of shows this weekend, Melt played in Portsmouth, New Hampshire, opened for Sammy Rae and the Friends in New York and played with New York City favorite Lawrence (the soul-pop duo of brother and sister Gracie and Clyde Lawrence, who attended The Dalton School with Dickstein and Stewart-Frommer).

“We’ve been lucky enough that in most of the shows we’ve played so far, the people there are there to see us,” said Dickstein. “Now that we have some bigger bills as supporting acts, I’m curious to see how it’ll be. It’s a different thing to have to play a show and win people over versus having people already there to see you.” However, it seems Melt has indeed won over the rooms they’ve played — the band is in high demand. “We just confirmed and announced two more shows with Sammy Rae in Northhampton and Boston in February, which will be really cool,” said Dickstein.

Balancing studying with touring, however, can sometimes be tricky. “I just got off the phone with our sax player Nick [Sare] because his professor just announced a few days ago that he has a midterm on Thursday, which is the day we have to leave for a show,” said Dickstein. “He just texted me saying that he’s going to office hours to see if he can get it moved.” While some members of Melt study music, many pursue other interests — Greenzeig is a political science and history major, while Dickstein studies English and government. “In general, professors have been very understanding,” said Dickstein. “If I go to my professor’s office hours and I tell them I can’t come to class because I’m flying to Texas, they’re like ‘Oh, that’s dope.’ They find it cool,” added Greenzeig.

With “Stupid in Love,” Melt is hoping to demonstrate that they can play in many different styles. “The whole Lawrence, Sammy Rae thing is a very specific world. But I think “Stupid in Love” shows a different side of us as well — we have a cool diversity in our background that might land us bills not only with soul pop bands but with indie or rock or psychedelic bands,” said Dickstein. “We’re trying to corrupt Eric,” confided Greenzeig, who, as a Phish fan, wholeheartedly welcomes the jamming side of Melt. “Being introduced to the jam band world was very exciting to me. I listen to a lot of Stevie Wonder, but also to folk music — Leonard Cohen, that kind of thing.” “The night before Eric came in with ‘Stupid In Love,’ we were talking about Leonard Cohen on the subway,” said Greenzeig. Dickstein replied,“Please, God, don’t even say Leonard Cohen’s name in that context.” “Well it’s important to know that’s what we were kicking around,” said Greenzeig.

With folk, jazz, R&B and soul influences, Melt has created a sound for itself that goes beyond soul-pop or rock, infusing its listeners with the energy it brings to every song. While Melt hopes to release an EP by next year, their recorded music is only half of their sound — as a vibrant jam band, their live shows are where Melt truly shines.  “Even more so than the energy of the crowd, what makes a difference is how we’re feeling onstage. Since such a big part of our shows are improvisation and reacting to each other, our best shows are always when we’re in a great mood and got dinner together before the show, hung out, then we get on stage and we have the best time,” said Dickstein. Greenzeig agrees: “Over the summer, at our show at the Mercury Lounge, I felt like I was floating.”