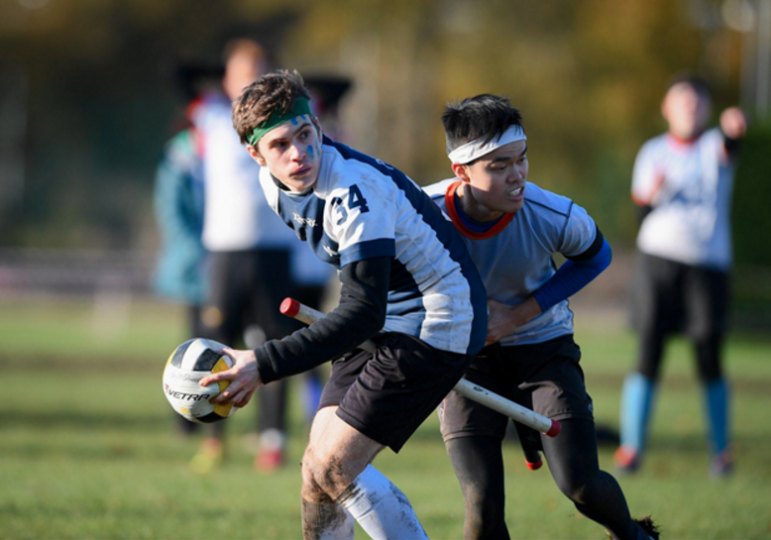 The Williams-Exeter Programme at Oxford offers students the chance to participate in a wide variety of British sports, from the conventional and ubiquitous like rugby to the utterly ridiculous and appallingly aristocratic like beagling, the hunting of hares on foot through meadows with a pack of beagles.

The first chance for students to survey these offerings is the “Freshers’ Fair,” an overwhelming extravaganza which takes thousands of first-years on a winding two-hour journey through every nook and cranny of a nineteenth-century examination hall.

As I found my way through the chaos and proceeded to sign up for just as many listservs as any other self-respecting fresher, I will admit that I was looking for one particular table: the Oxford Universities Quidditch Club.

Since I first found out about the real-life version at the age of 11, I have always wanted to play quidditch, the mixed-gender sport adapted from J.K. Rowling’s Harry Potter book series at none other than Middlebury in 2005. While the game originated on the leafy campus of a NESCAC rival in Vermont, it has since spread to more than 45 countries around the world. And it has especially flourished in a place like Oxford, where filming of the Great Hall and the Hogwarts Infirmary in the Harry Potter movies occurred.

So as I walked through the fair, I politely declined to join the American football club — which, I am deeply embarrassed to say, picked me out of the crowd as an American from my blue jeans and sweatshirt — and finally found the quidditch club. I got the training schedule and told the captains that I had previously tried to start a team at my own uni and knew (at least some of) the rules.

Several weeks of training sessions, local scrimmages, rulebook presentations and bonding activities later, I found myself looking out at a frosty field on the outskirts of Oxford well before dawn on a Saturday, ready for our biggest tournament of the term. Southern Cup, our regional competition, would serve as a qualifier for British Quidditch Cup, the national championship in the spring.

We knew that our path to qualification would not come easily. We were missing several key players, and I was recovering from the flu, despite getting a flu shot in America before I left (but not a “flu jab” in Britain once I arrived).

Anyway, we dropped our first game to a London team that we had beaten in a scrimmage two weeks earlier. That was the first sign of trouble. We were shut out in our next game by another hard-hitting London team, who went on to win the tournament, before coming up short against Bath, a lovely tourist destination but a tricky quidditch opponent, in our final contest of the morning.

As the forecasted rain inevitably fell and turned the chilly day into a freezing washout, we retreated indoors to a nearby cafeteria to count our losses, demoralized from an 0–3 start to the tournament. With several players nursing injuries and the temperature plunging towards zero, our captains surveyed the team to ask whether we wanted to forfeit our afternoon game and drop out of the tournament. We later came to recognize that such a dramatic measure would have been a mistake, but I greatly appreciated at the time that our captains were looking out for our health and safety, both physically and mentally.

With that reassurance, we rallied for a final contest of the day against Bristol under the lights on a turf pitch. Assisted by a dominant performance from our beaters, stellar positioning from our chasers and a highlight reel-worthy snitch catch from our seeker, I felt like it was my best game of the weekend. With a 200-90 victory, we stayed alive and advanced to a series of one-off qualification games for nationals the next day.

We returned just as early on Sunday morning, eager to show how much we had grown as a team and relieved that rain was not in the forecast. Although we fell, as expected, to a third London team in our first match, we knew that we had one more opportunity against Bournemouth to qualify. Unfortunately, on a muddy pitch that got shut down after our game by the tournament staff, we lost narrowly.

A consolation match against the first London team was some consolation, as we avenged our initial loss with an all-around team victory and another highlight-reel snitch catch. Even better was the news that we could still qualify for nationals through a backdoor: a developmental tournament in the spring against teams from northern England and Scotland that sounds perfect for our relatively inexperienced team.