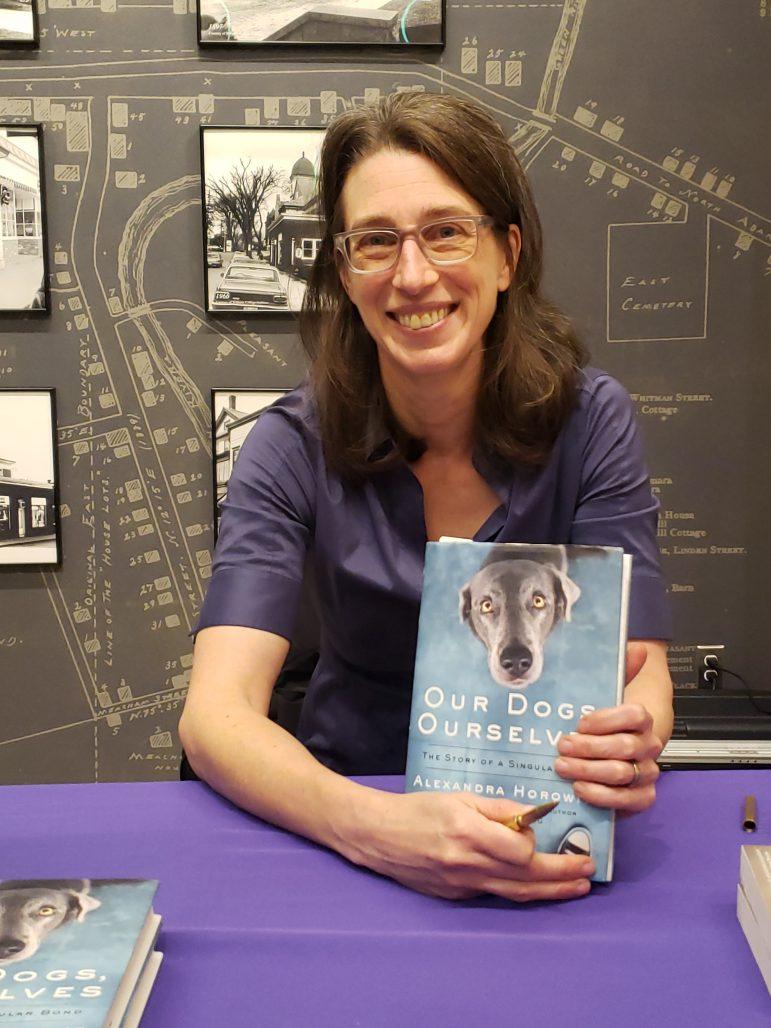 Alexandra Horowitz, head of Barnard College’s Dog Cognition Lab and a New York Times bestselling author, spoke at The Williams Bookstore last Thursday on her new book Our Dogs, Ourselves. Horowitz has previously published two other books on dog cognition: Inside of a Dog: What Dogs See, Smell, and Know and Being a Dog: Following the Dog into a World of Smell.

Horowitz began the talk by explaining how she came to write Our Dogs, Ourselves. While studying dog behavior and cognition at her lab at Barnard, Horowitz became curious about the relationship between dogs and their owners after observing their interactions. In the book, she looks at how humans “got to this point in history where dogs live with us … and how we bring them into dog cognition labs.”

Horowitz discussed the dissonance of the fact that dogs are personal property legally but are also akin to family for their owners. She described how owners treat dogs like humans, including by throwing them birthday parties and dressing them in clothes.

Horowitz explained that Our Dogs, Ourselves was written in an effort to also answer the question, “how do we live with dogs now, and how will we live with them tomorrow?” She discussed a particularly charming discovery she made while writing the book: that dog owners tend to give dogs human names. She said “that’s indicative that we think of them as people.” She also described how people talk to dogs as if they are children by speaking in higher pitched voices and repeating simple words.

Horowitz continued her discussion by reading from one of her favorite chapters of the book, about the what owners say to their dogs. She wrote down “each overheard snippet,” from “C’mon, it’s a lamppost!” to “Go get the ball! Get the ball … okay, I’ll go get it.”

Horowitz then read from a chapter called “Owning Dogs.” She read aloud, “are [dogs] our companions, or are they our things? The law says things.” In this chapter, she discussed the difference between the law’s definition of dogs and their owners’ perceptions. The chapter had a serious tone and discussed the meaning of owning a dog, including the fact that the legal status of dogs allows for abusive treatment by humans.

After reading, Horowitz took questions from the audience. One audience member asked if Horowitz had “gained any speculative insight on the origin of their relationship, from an evolutionary standpoint” in writing three books on dog cognition. Horowitz replied that “early domestication of wolves was a kind of self-selection … dogs self-selected to be affiliated with humans.” She gave the example of a geneticist who found that when foxes were domesticated, they ended up expressing dog-like traits, such as whimpering for attention and the curl of their ear.

Horowitz continued to answer audience questions, at one point describing how she conducted research at her lab. In answer to another question, she noted that suburban dogs are less social than urban dogs, as the latter are highly socialized creatures due to interacting with other dogs more often whereas dogs in suburban areas have a harder time socializing with other dogs as they spend a larger amount of time alone. She admitted, however, that she hadn’t studied geographical effects on dog behavior and thus could not truly comment.

Horowitz ended her discussion by describing her two dogs, Finnegan and Upton, both of whom are mixed breeds. She described that Finnegan is cooperative and friendly, and that Upton is scared of everything, as he lived in the country before being adopted. When describing her adoption tendencies, Horowitz said that “I can’t go into shelters, because then I adopt dogs.” She then closed by mentioning her next project: a study about dogs and their sense of their own size.