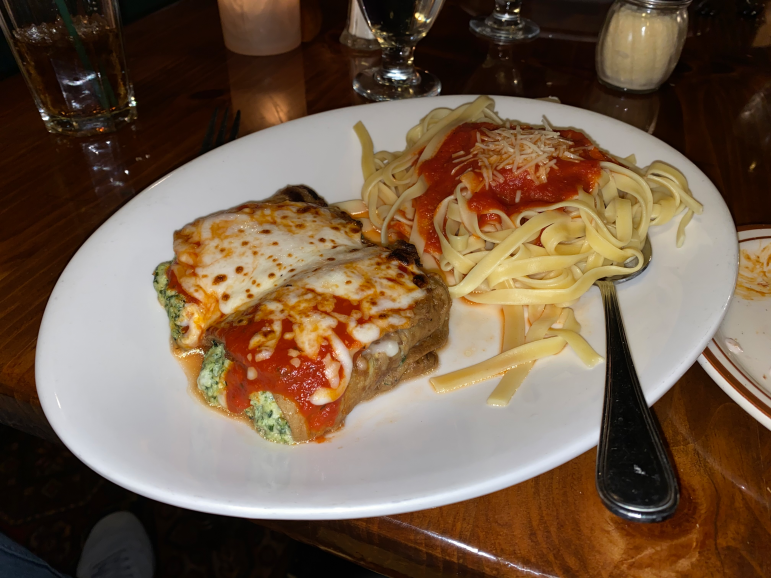 Despite The Publyk House’s stunning views, dishes such as the eggplant rollatini (above) were disappointing. (David Shakirov/The Williams Record)

Bennington’s The Publyk House is the epitome of a Vermont establishment. Nestled off Route 7 for nearly 50 years, the restaurant is housed in a former barn overlooking the picturesque rolling hills. Inside, the wood-paneled walls, massive fireplace and piano make you feel like you’re entering a Vermont cabin. This weekend, I had the chance to visit Publyk with a few friends to sample its old-style fare and experience an attempt at New England comfort food.

Located a 30-minute drive from campus, The Publyk House requires a time investment. Hoping that the mileage was worth the food, we ordered an assortment of dishes, many of which our waitress recommended. For appetizers, we sampled the fried oysters ($11), porky poutine ($11) and crab cakes ($12). Roughly five minutes after we ordered, our starters arrived at our table — a concerningly short yet obviously convenient wait time for appetizers.

The fried oysters, an easy finger food, were somewhat bland but worked nicely with condiments. Tyler Spiezio ’22, one of my fellow diners, was unimpressed as an oyster “exploded in [his] mouth in the wrong way.” Bravely venturing on, we were pleased with the pork poutine (a Canadian favorite), although it felt like a great late-night Snar option, not New England restaurant fare. The crab cakes, served with slaw, were impressive — a generous ratio of crab to bread that didn’t fall prey to typical crab-cake dryness. A massive highlight of the pre-entree was the bread and butter, emphasis on the latter. Publyk serves its bread with homemade maple butter, featuring a stellar combination of sweet and creamy notes.

Our entrees included an eggplant rollatini ($18), a fettuccine in gorgonzola cream ($18) and a barbeque chicken special ($20). The eggplant rollatini came stuffed with ricotta and spinach, with a side of fettuccine marinara. The rollatini was good: nothing to rave about yet nothing bad (a safe dish for vegetarians). The side of fettuccine marinara was not. Egg pasta in tomato sauce rarely works, and it unsurprisingly did not here. The pasta was overcooked and unseasoned and the sauce disappointing.

The fettuccine in gorgonzola cream was also unimpressive. It was a good dish, but, again, wasn’t elevated in any way. The roughly twenty-dollar bowl of pasta was inoffensive yet basic. Finally, the barbecue chicken was on the “daily specials” menu and was a pleasant highlight of the evening. It was absolutely and ridiculously soft and tender with a side of impressive mashed potatoes.

The desserts menu looked splendid. The brownie sundae ($8), skillet cookie ($8) and bread pudding ($8) were an adequate close to the meal. The bread pudding, a highlight, was served with a remarkably good sauce, while the skillet cookie also impressed.

On the drive home, we found it hard to describe Publyk to each other. It has the familiar American menu of classics, the beautiful Berkshire view, the friendly service and the homey vibe to be successful. Nevertheless, the food, which is expensive for the area, failed to impress us. Our dinner was inoffensive, though it did not deliver on what the restaurant’s ethos promised.

Publyk was overall not a bad experience; rather, it was disappointing. The restaurant has immense potential given its location, its property and its long history. However, Publyk seems to rely too much on the view and focuses too little on the food. An elevated, simplified menu would pair well with the stunning atmosphere.