One in Two Thousand: Margaux Kanamori ’23 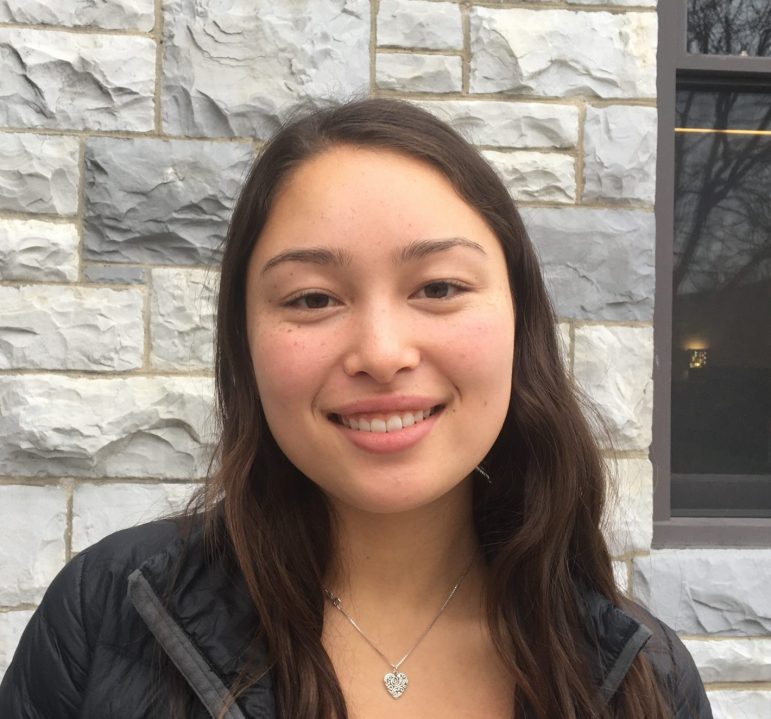 Each week, we randomly select a unix from a list of all current students at the College. So long as the owner of the selected unix is on campus, willing to be interviewed and not a member of the Record board, that person becomes the subject of that week’s One in Two Thousand. This week, the computer (using a very simple script in R) chose Margaux Kanamori ’23.

This is your first semester at Williams! What classes are you enrolled in?

I’m taking two English classes, actually. One of them is cross listed as theater, so I got to take two.

Exactly. [laughs] One of them is a poetry workshop where we write poetry and share it with the rest of the class. That has been really cool, but a little bit nerve-wracking, especially, in the beginning, to have my work with a bunch of people I don’t really know. And, I think it’s also been pretty rewarding. The other class is a tutorial on American plays, which I think is my favorite class. It’s just been really fun because every week we read a different play, and we get to talk about it.

What’s been your favorite play so far?

One that I really liked was the play we read this week called Dead Man’s Cellphone. It’s basically about a woman in a cafe who finds out that the man next to her is dead, but his phone keeps ringing, so she answers it. And then, she becomes obsessed with him and wants to figure out who he was and talk to his family.

Oh wow. I guess the title of the play really gives it away.

I also really liked Who’s Afraid of Virginia Woolf?. It’s about this really messed-up marriage. It’s set in a small, New England liberal arts college, which is funny because it’s where we are. [laughs] But the dialogue is crazy.

Poor transition, but speaking of Virginia WOOLF, do you have any fun memories from your WOOLF trip?

[laughs] I absolutely loved my WOOLF trip. My group went backpacking, and everyone in the group [was] really great. By the end we had so many inside jokes and weird stories from the trip, so on the bus ride back, we were sharing it with another group, and we wanted to assert our dominance to show that we were the more “bonded and cool” WOOLF group. So, one of my friends whipped out his guitar, and we all started singing a bunch of songs and shouting all our inside jokes that didn’t even make sense and weren’t that funny. [laughs]

I feel like that’s what packs of animals do to assert their dominance — making loud noises and stuff. Do you think it worked?

I don’t know. I think they thought we were kind of weird.

They’re definitely my closest friends on campus. Recently I started jamming with two of them — one plays the guitar and one sings — so we’ve just been doing covers and stuff.

Do you have plans to perform?

It’s been casual so far.

How has your experience singing with the Ephlats been?

I’ve really been loving the experience so far. I’m grateful that I got in and met all these amazing people. I feel like I’ve gotten close to everyone in my group.

What’s the difference between singing in an a capella group versus jamming out?

I like them both, obviously, but a capella is very intentional and technical. It’s very much reading music, paying attention to tempo and dynamics.

I heard you have a solo coming up!

It’s “You Know I’m No Good” by Amy Winehouse. I actually performed it for the mid-semester concert, which was more casual, but I’ll be performing it for our fall concert as well! I was really nervous when I was auditioning for it, especially because the other first-years in the group hadn’t heard me sing. I’m glad that I did it. It’s just really cool because everyone’s so talented.

Where are you from and where have you lived?

I’m from Brookline, Massachusetts, which is very close to Boston. But when I was in third grade, I lived in Berlin, Germany, because my parents were on sabbatical. This was at the same time when Brad Pitt was filming the movie Inglorious Basterds, so he and Angelina Jolie lived on my street, which was wild. But unfortunately, I didn’t get to see them. Only a lot of guards and paparazzi.

I’m so jealous! That’s so cool. What was one of your favorite days this semester?

I really enjoyed Homecoming because a lot of Ephlats alums came back, and it was a whole day of hanging out with the group and singing  — everyone lost their voices at the end of the day.

[laughs] Is that what you do all the time?

[laughs] Almost. We always sing to each other.

My favorite season is fall because I love seeing the leaves change color. Actually, I’m in a hiking PE class with [Director of the Outing Club] Scott Lewis this semester with two other people, and it’s been really fun. We just drive to a different mountain every week.

This past weekend, [Lewis] was driving up to Boston, and I wanted to visit my parents, so I got a ride from him, and it was fun bonding time.

That’s really sweet of him! Did he do any handstands in Boston?

On our way to Boston, we stopped at McDonald’s to get coffee. And he did a handstand on the countertop there. Everyone was a little bit concerned, but I thought it was funny.

Do you go off-campus often?

I went to Mass MoCA with someone from Ephlats. We have this thing called Phlig dates where two people from the group grab meals and hang out, and it’s really nice. I really liked this really cool light room which changes color, but when you walk in it doesn’t feel like you’re in a room and like you’re just standing in a wide expanse.

Apparently Kanye West was at Mass MoCA this summer!

What?! He came all the way here?

What did you do over the summer?

I play violin, and my friend and I went on this cool program in Cremona, Italy. It was a month of me and my friend eating gelato and pizza every day, and playing our instruments for the rest of the day — chamber music and orchestra.

Do you still play here?

I am taking lessons, but I’m not in the orchestra because I got tendonitis from playing too much in Italy. I decided to take it easy this semester, but maybe I’ll audition next semester.