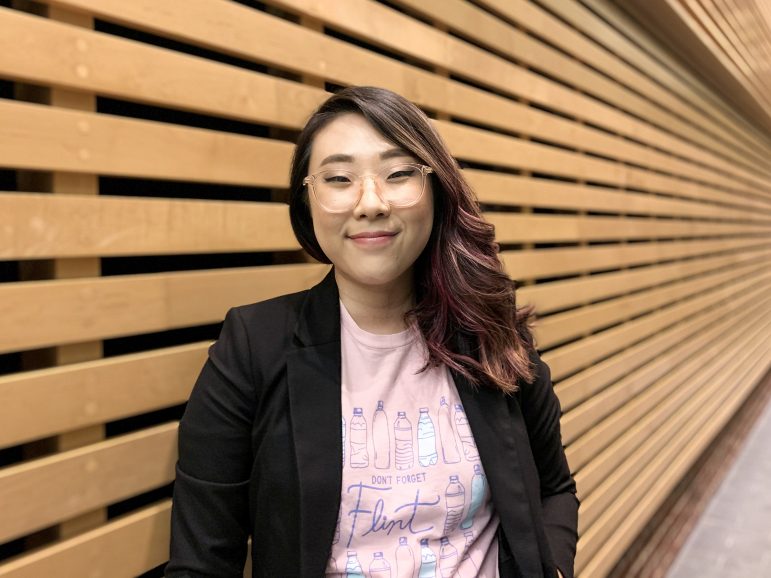 Franny Choi, who will teach courses at the College in the spring, negotiates her intersecting identities and past activism through teaching and writing. ETHAN DINÇER/THE WILLIAMS RECORD

Franny Choi does it all — a poet, performer, essayist and former community organizer, she is currently a Gaius Charles Bolin, class of 1889, Fellow in English at the College. Lydia Duan and Lily Goldberg had the chance to sit down with Franny Choi and talk about writing, activism and more.

Lydia Duan (LD): So what have you been up to so far on campus?

Franny Choi (FC): I’m here for the next two years to be partly a faculty member and partly here to work on my own projects. I’m not teaching this first semester that I’m here, which has been really wonderful, but also pretty weird — there hasn’t been a period where I wasn’t teaching students for the past six years. As a creative writer, my own research doesn’t fit neatly into the category of ‘research’ the way other folks’ work might, but it means I’m working on a new poetry manuscript and on a series of essays that I think may become a book-length project, but I’m doing a lot of reading and a lot of living.

LD: What are you looking forward to on campus?

FC: I’m definitely really looking forward to getting to know students, and I’m really looking forward to this Brew & Forge lecture series that I’m organizing. It’ll be a series of events where we bring one poet and one community activist or organizer together into a space to present on their work and give an onstage conversation about the intersection between their work. Each one will give a workshop the next day — a poetry workshop and an organizing training workshop, to get both parts of the brain moving.

LD: How does your activism influence your work?

FC: Sometimes it’s been as straightforward as writing and reading a poem at a rally, or writing a poem imagining a future world without police that I wrote while doing police abolition work. I think it’s about understanding that questions about power are going to be everywhere, in every realm of work. And questions of thinking deeply and having complicated feelings are also going to be in every part of work. There’s also a project I’ve been doing for the past few years called the Brew & Forge Book Fair — “Brew & Forge” is a reference to a quote by Cherrie Moraga and Gloria Anzaldúa from This Bridge Called My Back. The quote is, “Change requires a lot of heat. It requires both the alchemist and the welder, the magician and the laborer, the witch and the warrior, the myth-smasher and the myth-maker. Hand in Hand, we brew and forge a revolution.” The Brew & Forge Book Fair is an online book fair that we do once or twice a year where authors donate a few copies of their books, and they go up for sale, and everyone who donates a book gets to vote on where to send the proceeds. They go to one of five grassroots community organizations that don’t have a huge national presence but are doing great local organizing work. You get a signed copy of Ada Limón’s book, for example, and you get to send that money to, say, Youth Justice Coalition in L.A.

Lily Goldberg (LG): Do you feel like the solitude of writing is ever at odds with the “loudness” of activism?

FC: The “in-the-streets” chanting part of activism is only the most visible part, like how the part of a mushroom you see is only a tiny bit of a much larger organism. A lot of [organizing] is just calling people on the phone and setting up mass texting systems and writing up talking points. I think there’s very interesting parallels to art for that reason. Even before the point where you set pen to paper, there’s all the thinking you have to do and the experience you have to have in the world and the books you read and the movies you watch, and then there’s the part where you have to share your work with somebody, which is like super public. A former teacher once said to me that in order to be a writer, you have to learn to be a sort of social hermit, meaning you have to cultivate solitude at the center of your life, or be down to leave it and come back to it.

LD: What are your thoughts on representation and identity in your work?

FC: One thing I used to think was that it makes such a huge difference between when I perform my work and when it’s published in a written form that everyone can read. In one, my body is present, and in the other, it’s not. While that’s true to a certain extent, certain bodies attached to certain names will always be present in the room, whether or not you’re physically there. If there’s a poem of mine that says “by Franny Choi,” my body as an Asian American woman is in that room, whether I like it or not. Partly because of the inevitability of my physical life being part of the conversation with or without my consent, I’ve been like, “Great, let’s dig into it! You think my body’s weird? I’ll tell you how weird it is.”

LG: In the wake of the English department Boycott, I’ve overheard and been part of a lot of conversations about how we might define ethnic literature and seek to teach it. How have you seen the pedagogy of creative writing handle these issues?

FC: The thing about boycotts and other sorts of protest actions like that is that people tend to focus on critiquing the tactic — like I said, that’s just the mushroom. It’s all the stuff underneath that matters… It’s not enough to just have a diverse syllabus. But it is really important. If we can’t see ourselves in the world of thought and conscious feeling, then we can’t see ourselves as full people. I think that having writers of color, writers who come from immigrant backgrounds, writers who are queer and trans and femme — it’s all urgent. As a creative writing instructor, none of us knows what poem or short story will make things click for our students or as learners ourselves. I could read 50 different poems by fifty Asian American poets and not relate to a single one of them until I get to Myung Mi Kim, and then I’m like, “Oh my god, I get it, I’m in it.” You have to go as broad as possible to increase the chance that a student will see something that will make their brain explode and push them to become the writer they were always meant to be. It’s the question of my professional life — how do you create a just creative writing classroom? Not just an effective one, but one that strives towards building the world we imagine we want to see. For me, it’s about pointing students to the wildest and most powerful version of their own voices. And about teaching students to engage deeply with voices that are radically different from their own. Meaning it’s about empowerment and empathy, as well as access to a world of potential ancestors.

LD: As an English major and a person of color, I think English as a discipline can be pretty retrograde and reluctant to address questions of race and empire. How do you envision resuscitating writing and English literature?

FC: I think that students are going to go where they feel seen and safe and challenged in ways that don’t disregard their humanity. I don’t think any professor should be allowed to blame them for that. It seems like having more opportunities for more students to be in creative writing classes that speak to their experiences is something I’ve been hearing people express a need for. I also think that the “canon” isn’t necessarily evil. However you need to eventually find your way to Dickinson and Whitman, great. But it is also a fact that if you’re writing American poetry, there are some voices that may have shaped your voice without you even knowing it, and to be able to trace your lineage and to look at it without fear is important to me. I can live in America and be against everything America stood for, but if I don’t acknowledge that I am shaped by this capitalist, imperialist society, I’m lying to myself. Also, Emily Dickinson was weird and cool, and Walt Whitman was queer and bizarre. It’s okay for us to go into those canons and not just break them, but reclaim them — to say, “This is my ancestor too,” in certain ways. It’s also true that intent matters, that orientation towards classes you go into matters — do you want to learn Shakespeare sonnets because you want to have a better understanding of Terrance Hayes’ sonnets because you love Terrance Hayes’ sonnets? That’s an amazing reason to read Shakespeare! If you’re reading Shakespeare in order to understand what Kendrick Lamar is on, that’s great.

LG: I like the idea of queering the time frame of when students are “supposed” to encounter texts. I feel like I’ve always been told to read Shakespeare first so then I can get Terrance Hayes. But I like this more.

FC: There’s arguments for both. But I think I’m more inclined to try to get to know my mom before I get to know my grandma. The bottom line is that all students deserve access to the canon, as well as those writers who have been building and shifting literature from the margins. We all deserve to know where we came from and to envision where we might be heading.