Taking on the social calendar, one event at a time 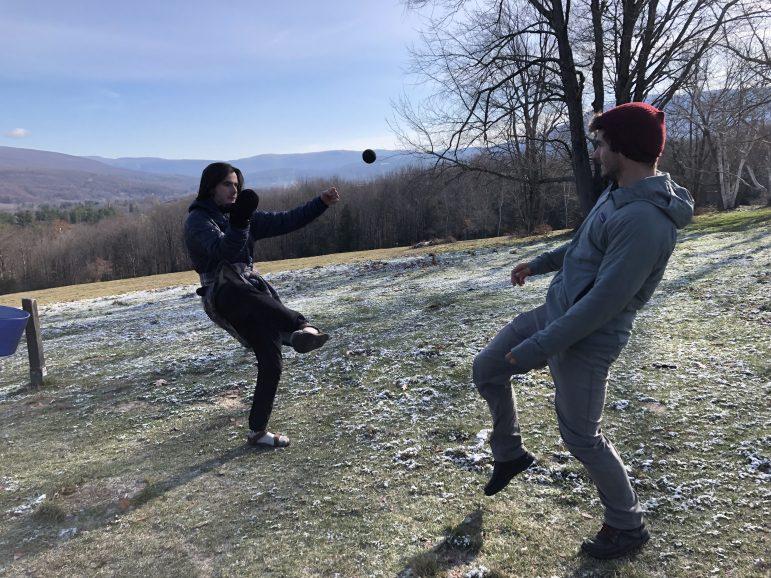 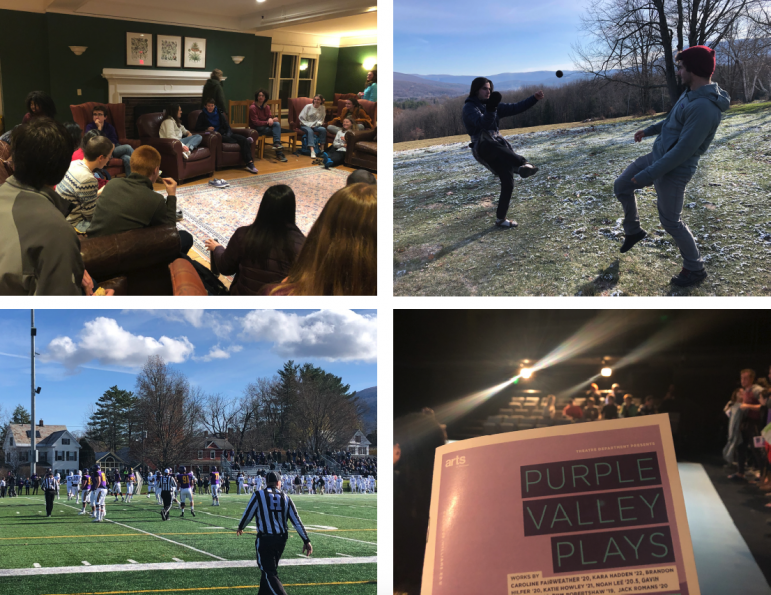 The social calendar brought me to a variety of events, including (clockwise from top left) Storytime in Dodd Living Room, a hike-turned-hacky-sack-game on Stone Hill, Purple Valley Plays and the Amherst-Williams Homecoming football game. (Irene Loewenson/The Williams Record)

“Another week is almost done / This weekend will certainly be quite fun / Alums, plays, and sports, oh my! / Homecoming weekend will be a semester high,” chirps the opening of this week’s social calendar poem.

The social calendar, a weekly Thursday-morning missive written by Alex Pear ’22, promotes the College’s weekend events. The email always contains a colorful poem comprising quatrains about the various activities. Despite the occasional strained rhyme — this week, Pear rhymed “Mammoths” and “damage” — the poems present a concise, engaging overview of the calendar.

Walt Whitman once wrote, “To have great poets, there must be great audiences too.” In the spirit of being a great audience, I decided I would follow Pear’s poem to the letter.

That is, I would try to go to all 15 social calendar events.

When an email entitled “social calendar!!! (it’s homecoming weekend!)” materialized in my inbox on Thursday morning, I immediately took to planning my weekend. I emailed the leader of the Williams Outing Club (WOC) hike to Cascade Falls (3:00-5:30 p.m., WOC Office) to express my interest in joining the expedition, but she canceled the hike because of a conflict.

My first event, then, was Purple Valley Plays Program A (5:00-6:30 p.m., the ’62 Center for Theatre and Dance), “a festival of new work for the stage,” according to the program. As part of the festival, I was to attend three different sets of student-written plays.

From the ’62 Center, I rushed to my friend’s birthday dinner. Unfortunately, the dinner precluded me from attending a talk by Larry Spotted Crow Mann (7:00-8:00 p.m., Paresky Auditorium), a poet who “travels throughout the United States, Canada and parts of Europe to schools, colleges, pow wows and other organizations sharing the music, culture and history of Nipmuc people,” according to the social calendar.

Next, I ran to Log Trivia (8:00-11:00 p.m., the Log). I missed a question about the Italian currency before 2002 (the lira) but nailed one from the wordplay round about a bad brother and a stack of stones (Cain and cairn).

I left the Log early so I could make it to the WOC Stitch-In, (9:15 p.m., Zilkha Center Living Room), where six people sat embroidering and listening to relaxing music. I made a friendship bracelet from the purple embroidery floss before calling it a night.

The social calendar promoted the WOC sunrise hike (6 a.m., Paresky steps), so I should have awakened at 5:45 a.m., pulled on my fleece and climbed Pine Cobble. Journalistic ethics compel me to inform you that I slept in instead. As much as I was committed to following the social calendar, I was tired and sick, and I just could not stomach a 6 a.m. hike in 23-degree weather.

In the late afternoon, however, I reaffirmed my commitment to the social calendar. I was forced to make a sacrifice. Instead of attending a talk by Bachelor in Paradise contestant Dylan Barbour ’16 — which was not in the social calendar — I attended the Purple Valley Plays Program C (5:00-6:30, the ’62 Center). Glad as I was to support students’ original theatrical work, I was sad to miss seeing Barbour.

My final stop for the night was the Concert Choir and Chamber Choir Concert (7:30 p.m., Thompson Memorial Chapel). “This performance … will involve audience participation,” the social calendar noted. The calendar was right. For the rousing “Take What You Need,” the audience joined in for a call-and-response, and I tried to avoid coughing when it was our turn to sing.

Homecoming morning dawned cold and clear. I brought my friend to the WOC-led Homecoming Hike up Stone Hill (9:00-11:00 a.m., Paresky steps). When we arrived on the steps of Paresky, the only person there was Duncan McCarthy ’21, who was leading the hike. “Thank God,” McCarthy said when he saw that the hike would have two attendees, at least.

We strolled toward the Clark, meeting up with McCarthy’s friend Jared Bathen ’20 along the way. The four of us walked to the top of Stone Hill, where we drank hot chocolate and attempted to play hacky sack.

The Amherst–Williams football game (12:00 p.m., Weston Athletic Complex) was in the social calendar, so I went, for about 90 seconds. I witnessed a touchdown, I think by the Ephs.

After the plays came a concert by Artist in Residence in Violin Joanna Kurkowicz (7:30 p.m., Brooks-Rogers Recital Hall). The concert featured what the social calendar described as a “rarely played” Geminiani sonata and “Arvo Pärt’s mysterious and very popular Fratres.”

The social calendar highlighted only two events for Sunday. At the first, a RASAN (Rape and Sexual Assault Network) letter-writing event (7:00-8:30 p.m., Paresky 220), attendees wrote letters to a Massachusetts representative urging him to present two bills regarding college accountability for sexual assault to the floor of the state legislature.

Finally, I attended Storytime (9:00-10:00 p.m., Dodd Living Room). Lucia Wiggers ’22 spoke about spending their early childhood experiences in Russia, including a family outing to see the mummy of Vladimir Lenin.

As I left Dodd, I felt a little sad to be leaving the social calendar behind. It had been nice to lead a life so regimented yet so varied. I had met new people, learned to play hacky sack, listened to virtuosic music and tried to make a difference in Massachusetts politics. The weekend had indeed been, as the poem put it, “a semester high.”