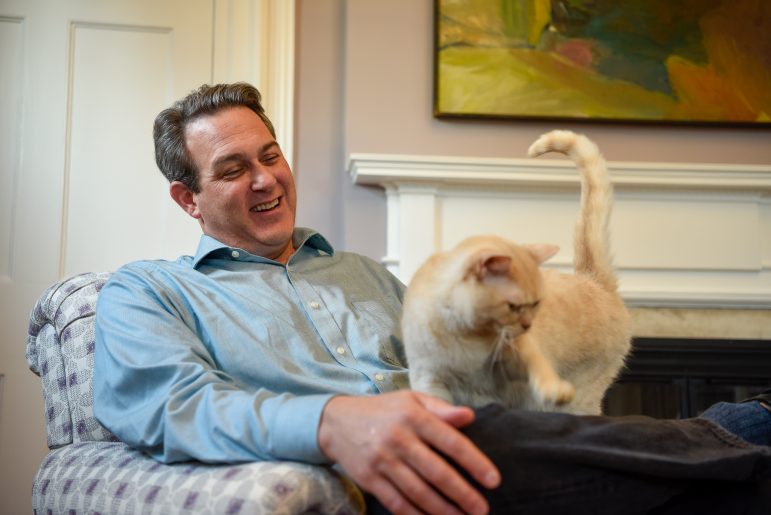 Steve Simon, pictured with his cat Shoshie in the President’s House, has settled into life as First Gentleman of the College. (Ethan Dinçer/The Williams Record)

“I’ll introduce myself as Maud’s husband at a lot of events because that’s my connection to the place,” Simon said. “And sometimes, some older men will give me some looks, but the women usually love it.”

He said he knows that a small portion of people may find it unusual to see a man in his role. “But it’s so hardly worth noting in today’s world,” he said.

It’s simple, Simon said: Mandel “has a great job,” and he gets to support her in it.

“And it is great being here, so it’s totally my pleasure,” he added.

For Simon, the College and the surrounding area have quickly come to feel like home.

After he and his family moved into the President’s House, “we just kind of jumped in,” he said. “There were many people who reached out to us to invite us to their homes. We were quickly hosting things here at our house. Once you become the college president, everything just starts flowing to you. It’s just like jumping into the pool, really.”

Before coming to Williams,  Mandel was Dean of the College at Brown. When they first moved to Rhode Island, Simon was working for Borders, which has since gone out of business, as director of magazines. After Borders, he did magazine-related consulting, worked at Google AdWorks — now called Google Ads — and created a website to allow easy access to English-language, non-professional magazines from across the world. He is currently working on a more streamlined version of the website, with the help of a web designer.

“What it’s really about is library science,” Simon said. “It’s classification structure: How do you take knowledge and classify it in a way that will be meaningful to people — not overwhelm them, not underwhelm them.”

In essence, he did this for Borders’s newsstands, too, choosing which magazines to display and how to categorize them. He curated newsstands for all of Borders’s stores across the world, including in Singapore, Australia and Britain.

Simon has been interested in current events since high school and would read newspapers and magazines frequently. This interest continued in college. He graduated from the University of Michigan in 1991 with a double major in history and Near Eastern and North African studies, more commonly known as Middle Eastern studies.

Still small at that point, Borders had only a few stores, and one of those was in Ann Arbor, Michigan. Simon fell in love with the bookstore. When he noticed a Borders in Kansas City, his hometown, he applied for a job after college and began curating that bookstore’s newsstands — he had noted on his application his interest in magazines.

“I love the idea of the serendipity of someone else discovering something they’re interested in that they didn’t know they would be,” he said. “And a newsstand is really great at that. If it’s done right, you can find all manner of topics, and you had no idea that you were interested in it. It occupies a very small amount of space, and yet it contains an awful lot of information.”

Now, with his website, he has created a system that takes up an even smaller amount of space but allows access to even more information. It is not a commercial enterprise, he said. He is not trying to grab people and keep them on his site.

“I myself am just a waystation that you could go and get a subscription,” he said. “You could get a digital subscription, depending on if the magazine does that.”

His interest in magazines grew during his time as director of magazines at Borders, helping to inspire his website.

“When I was [at Borders], the newsstand system had a total of 4,000 magazine titles in it,” he said. “I pretty much knew all those titles, and I was always impressed and amazed by what’s out there.”

Now, he said, he works on his website from home. He also accompanies Mandel to the social events she attends in her role as president.

“I am pretty much with Maud for all the social parts of her job, excluding when she travels, because I’m here for that,” he said. “And, of course, she and I talk about the day’s events. I would say I see myself as ambassador about the College to other people, and of having a job of being friendly toward all the various people I get to meet, which is not a problem because people overwhelmingly have enjoyed their experiences here and are pretty happy.”

He and Mandel walk together often, especially to Stone Hill behind the Clark. Sometimes, at night, they walk around the track  — for exercise and to spend time together. They also spend time with their cats, Shoshana and Ishmael, known around the house as Shoshie and Ishie. Shoshie can be quite the performer, according to Simon. Shoshie perched in his lap during our interview, alternately sleeping and posing for the photographer.

On occasion, Simon and Mandel’s schedules can become hectic, limiting quality time with the cats and their daughter, Ava, who is a sophomore in high school. In general, though, he said his role as First Gentleman is not overwhelming.

But he had no idea what to expect when Mandel was offered the job, he said. He knew only that an adventure was on the horizon.

“I knew that Williams was a really good liberal arts college somewhere in Massachusetts,” he said. “I had never been to the Berkshires, and I’d never been the spouse of a college president, so I really did not know. What I knew was that Maud and I had made a decision that we wanted to go on a new adventure, and that’s here.”

Despite having been here for only a little over a year, it seems he has adjusted to his new role and his new home.

“Driving into town on Route 7 coming from the south, right before you get to the high school, there is a view of this area that is just spectacular,” he said. “It’s like a postcard. And every time, I’m like, ‘Oh, now I’m home. I live here.’”