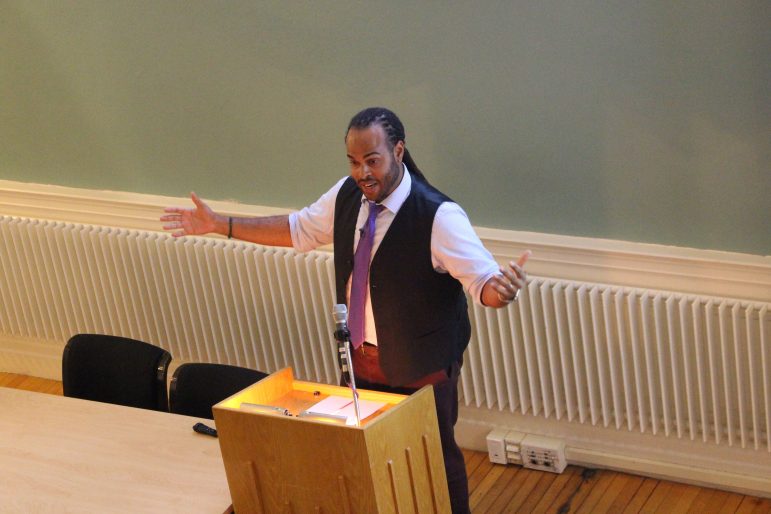 Tracey Benson, an assistant professor of educational leadership at the University of North Carolina-Charlotte, spoke on Oct. 30 on strategies for identifying and mitigating unconscious bias in schools. Tracey, who has previously served as the principal of Pittsfield High School in Berkshire County, was brought to campus by the W. Ford Schumann ’50 program in democratic studies, the department of Africana studies, the program in teaching and the office of institutional diversity, equity and inclusion.

Benson began the talk by detailing the moment when he first realized how unconscious bias and racism affected his treatment as a student. Recounting an interaction in fifth grade in which a teacher aggressively knocked his belongings to the floor after observing him joking with a friend, Benson described asking himself, “What was it about me at that time which engendered such a reaction from him?”

Benson then sketched out a definition of racial bias and its sources, including conditioning through the media, family and peers. As an example, he highlighted the ways that even walking through a grocery store with overwhelmingly white faces on packaging might cause one to associate whiteness with the norm. “Take a moment as you go shopping to see who’s on the packaging…that’s the priming we get from a very young age, just walking through society,” Benson said.

Benson then moved to the specific context of schools and how unconscious bias might affect students in areas such as assessment, tracking, participation, expectations, support and discipline. Benson said that he de-emphasized discipline as part of his efforts to combat implicit bias. “A very small percentage of students come into contact with the discipline system,” he said. “This is not to say discipline is unimportant, but it’s a small proportion of where racial bias affects the majority of our students.”

Benson also outlined several empirical studies regarding racial bias in schools, including one study where identical essays were given to white teachers, some with names that would be read as white and some that would be read as Black. Essays with white names attached got lower grades but more comments, while essays with Black names attached got higher grades and fewer comments. In effect, Benson said, this was teachers saying to the Black students, “This substandard work is the best you can do, so you get an A for this. But you white students, you can do better, so you get a C and a lot of comments.”

In outlining solutions for the effects of unconscious bias in schools, Benson first turned to the need to break dichotomies, particularly the “good non-racist/bad racist” binary. This change, he believes, will lead to less of a focus on intent and more on impact. “We got so hung up in our intentions that it’s hard to get feedback when our impact is based in racial bias,” he said.

He also stressed the impact of committing to “being” rather than “being seen as” non-racist. Schools should, for example, avoid simply bringing in an expert for a professional development session and instead aim to incorporate discussions of bias into all of their planning and meetings.

Benson also implored schools to use specific, data-driven approaches to reduce bias. These approaches, he said, include documenting racialized patterns, such as in-class participation or student of the month awards (two examples he highlighted), and developing a strategy to disrupt those patterns. He urged schools to avoid adopting short-term solutions which ignore larger patterns, providing the example of a school that gave all of its “student of the month” awards to students of color after realizing it had given the award to only white recipients for several consecutive months. “You get a B for intent, but in terms of really investigating what happened, you missed the boat,” he said.

In closing, Benson noted that the work of unseating racial bias was challenging, but required consistent effort. “When we marginalize the conversation to one day, … we are making it taboo at all other times.”