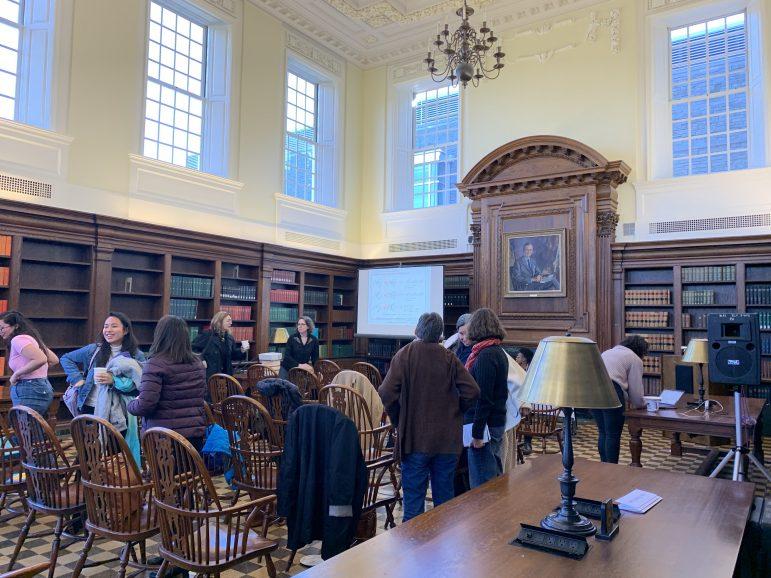 When envisioning an event titled “New Voices in Science and Technology Studies,” the Sawyer Library Reading Room is not exactly the location that one expects. Despite the College’s fervent efforts to revamp and modernize campus, the reading room remains old-fashioned, with its book-lined walls, ornate wooden bookshelves and chairs and intricate molded ceiling.

The only technology present at the event was a precarious projector and sound system which were obviously moved from the sleeker parts of the library. No part of this landscape screamed “new” or “technology”; beyond the fact that the room was predominately populated by people of color and white women, it truly screamed “classic-liberal-arts-college-from-the-20th-century.”

The atmosphere contrasted with the content of the symposium, held on Saturday. The event aimed, as noted in its description, to “scrutinize the imbrications of society with science and technology from diverse disciplinary vantages.” The symposium lasted eight hours and included presentations from — as the College’s call for papers described — “early-career scholars (ABD or recent Ph.D.) from historically underrepresented groups.”

The presenters were divided into three panels: Automated Connection, Automated Control; Ethnographic Perspectives on Infrastructure and Public Health; and Epistemic Borders and Solidarities, with research topics varying from the effect of automation in Jakarta’s bike-taxi drivers’ digital platforms to how land-surveying technology perpetuated racist land-settlement. After each panel, a College faculty member led a discussion with the panelists and the audience participated in a Q&A.

The presenters, who held degrees in fields including sociology, American studies, history, public health, geography and anthropology, and come from institutions such as Berkley, M.I.T. and Princeton, were selected based on submitted work and all received a $500 honorarium from the college. The event was specifically advertised to solicit submissions from self-identified members of underrepresented groups.

The New Voices in Science and Technology Studies event focused more specifically on the intersections among science, technology and equity, where academics of color spoke to issues such as environmental racism, violent land practices and the prevalence of Western science. This focus sparked controversy on the self-described “right-minded” student-reported news site, The College Fix, which posted an article on the symposium titled “Whites need not apply: Campus sci-tech symposium to only feature scholars of color,” criticizing the event’s perceived exclusion of white scholars.

Students who attended the symposium, however, disagreed. Melvin Lewis ’22, for example, who is currently taking “Indigenous Futurism and Science Fiction” with Assistant Professor of American Studies Eli Nelson and came to the symposium for extra credit, said he thought that it is “important to give a platform to underrepresented voices in academia to help counteract the effects of the barriers to entry.”

“Academia often seems like an old boys’ club,” Lewis said. “It’s great to pass the mic to the young scholars and give them an opportunity to discuss their work.”