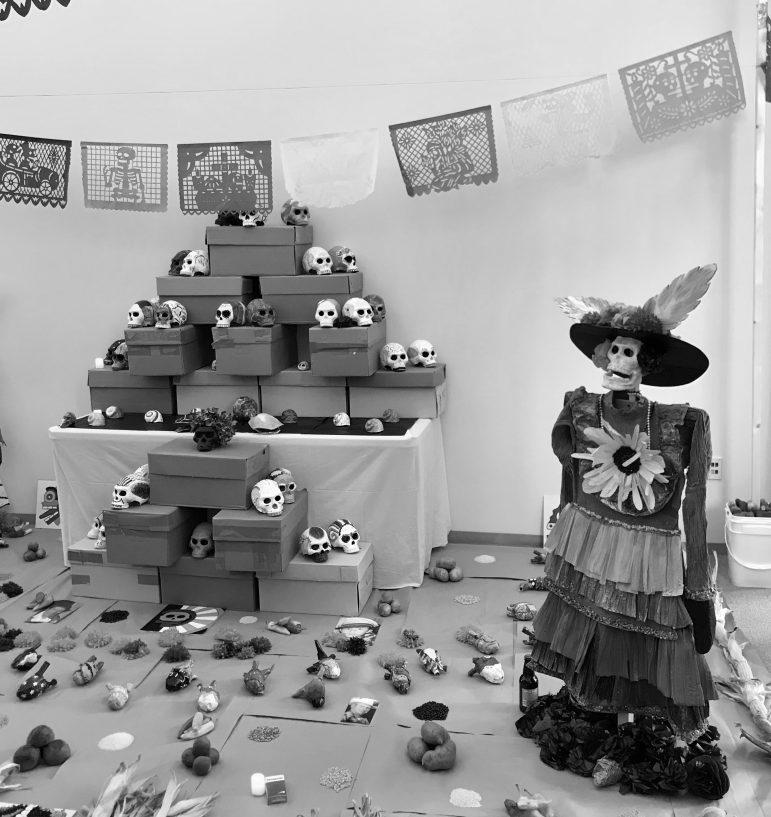 “La muerte es absolutamente democrática,” Mexican artist Hugo Peláez Goycochea told a group of roughly 60 students and faculty gathered around an altar commemorating Day of the Dead in Hollander Hall on Friday. A syncretism of Indigenous, pre-Colombian traditions and Catholic customs brought to Mexico during its colonization in the 16th and 17th centuries, Day of the Dead is a Mexican, community-based celebration and remembrance of lost loved ones, as well as a time to reflect on the relationship between life and death more broadly. “Every loss makes us reconsider our own passage through this land,” Peláez Goycochea said.

To create the display, Peláez Goycochea led a week-long workshop for students in the art of cartonería, a Mexican style of paper mache used in Day of the Dead displays since the 19th century. Throughout the week, students crafted hearts and skulls in Spencer Art Studio to place on the altar, using recycled newspapers and engrudo, an organic glue made with wheat flour. The display also includes pan de muerto to attract the souls of the dead, water to represent the purity of the soul, candles to help guide the journey between the living and the dead and cempasúchil, a native Mexican marigold.

“It was one of the most interesting, intense and productive weeks I’ve had in my life as a cartonero,” Peláez Goycochea said of his time at the College. “I had the opportunity to share this practice in a hands-on and sensory way…and this is very important because cartonería is an art form passed on generationally, from parents to children, and also a way of life.”

Peláez Goycochea has gained widespread recognition for his works in cartonería, which have been displayed in throughout Mexico City and even in a public parade in Marseille, France, and he has been awarded first and second place for his work in the National Competition of Alebrijes in Mexico. Though he spent the first part of his career as a technician and designer, he said this career field never “fulfilled [his] need to be creative and original.” His renewed passion in cartonería, however, allowed him to realize this goal.

“Cartonería has allowed me to develop creative processes using simple materials with immense expressive potential,” Peláez Goycochea said. “It has also connected me with my deep roots and pride as a Mexican.”

The effort to bring Peláez Goycochea to campus had been years in the making, led primarily by Visiting Assistant Professor of Spanish Carolina Melgarejo-Torres. “In Mexico, I worked for years in Institutions of Culture,” Melgarejo-Torres explained. “To start this project, I relied on these past networks and asked former colleagues to recommend artists who could work with us on the project. I contacted Hugo, and he fell in love with the project.” The project was also supported by the Center of Foreign Languages, the Zilkha Center, the Center for Learning in Action and the department of art.

The goal of the project, Melgarejo-Torres explained, was to create an open and informal space for students to learn through creating. “Hugo and the students talked about a multiplicity of topics: social issues in Latin America, traditions that change, food, migration, cinema,” she said. “The conversations were very spontaneous and engaged in a way that is sometimes difficult to reach through set classroom lessons.”

During the ceremony in Hollander Hall, after students presented their offerings on the altar, both Melgarejo-Torres and Peláez Goycochea spoke on what Day of the Dead means to them personally. The event continued with Peláez Goycochea and students singing “La llorona,” a traditional Mexican folk song, and ended with an open reception with traditional food and beverages around the altar.

“Personally, I felt honored to carry out this workshop and the assembly of the altar in one of the most important and historical educational spaces in the United States,” Peláez Goycochea said. “I want to thank the institution and the students as a whole for their support and participation in creating this event.”