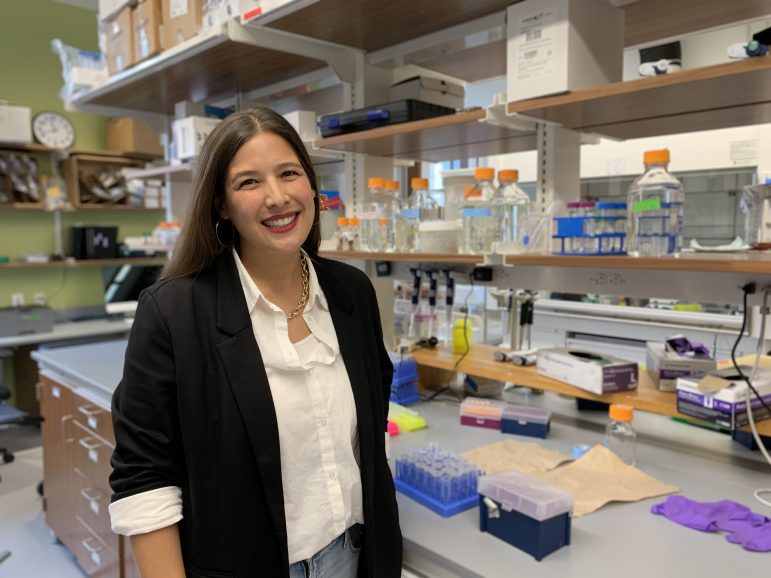 While the antibiotic penicillin is still an important drug today, its effectiveness has been diminished by the uptick in resistant strains of bacteria. Assistant Professor of Chemistry Katie Hart hopes to make some progress in reversing that.

For almost three years, Hart has been studying the function of beta-lactamase, a family of proteins that allows bacteria to resist beta-lactam antibiotics like penicillin, and its relationship to the structural components that bolster their resistance. While genetic mutations usually take a long time to develop, bacteria evolve at such a fast rate that scientists like Hart can track those changes over time.

Hart’s current project has roots in her days working toward her doctorate at U.C. Berkeley. In graduate school, she also studied the structure-function relationship of proteins, but because Berkeley does not have a medical school, she was unable to work with health practicioners on applications of her research.

That aspect of her current research was inspired by her post-doctoral work at the Washington University School of Medicine, where she conducted experiments with Professor Greg Bowman that informed and tested his computational models.

Unlike many other experiments in the same vein, Hart’s research is focused on how these proteins function, rather than on developing drugs to inhibit them. “I’m an academic, so I’m not trying to invent a new blockbuster drug,” she said. “I’m fundamentally interested in how it is that proteins, in general, can evolve new functions.”

That is not to say that her research is without any use in the medical field; Hart hopes that if all goes well, others will use her findings to design new drug compounds.

A typical experiment begins with genetically engineering E. coli to make proteins and then separating the proteins from the rest of the cell. Once separated, they cannot be studied directly. Instead, Hart and her team have to examine the way they interact with light through a technique known as spectroscopy and then make conclusions on the basis of their observations. “It’s like a puzzle,” she said. “We’re trying to piece together how these molecules are behaving.”

Hart and her team also test the effectiveness of each protein by determining how much of a resisted drug is needed to kill bacteria. It is a long and often repetitive process, and Hart credits a lot of the success to her thesis students. “Thesis students… are the primary drivers of my research,” she said. “They’re the ones who are generating the data that I then will help analyze with them. It’s a partnership.”

One of Hart’s thesis students, Drew Cohen ’20, has been working in her lab since the summer of 2018. “After my sophomore year, I got started in the lab and got really interested in what Professor Hart was doing, so it was pretty much a no-brainer when I was looking for my thesis advisor,” he said. “It’s been a cool experience so far.”

Another thesis student, Ryan Rilinger ’20, agreed. “Working in the lab has been a wonderful experience for me to get more intensive, hands-on experience working in a chemistry lab, and greater confidence and familiarity with using different machinery and running different types of experiments,” he said.

This September, Hart received a grant of $378,000 for three years from the National Institutes of Health (NIH). Because the NIH is focused on human health research and her project aims to answer more general questions, she wasn’t expecting much. “I was anticipating that I’d get feedback, and then I’d rewrite for the [National Science Foundation],” Hart said.

So, it was a pleasant surprise when the NIH offered her a grant, in a decision that she attributes to the NIH’s growing trend of supporting undergraduate research. Hart also believes her research assistants played a critical role, as the research she used for her proposal was gathered by her first thesis students. “I can’t emphasize enough how important the students have been to both my research in general, but also specifically securing this grant,” she said.

Much of the money from the grant will go toward purchasing essential equipment. The money will also cover the costs of using the instruments at Johns Hopkins University when Hart goes on leave to continue to do research.

While Hart is realistic about what she can accomplish over the next three years, she is nevertheless hopeful. “This is my first time doing this, so I doubt I will get through every single thing that I proposed, but hopefully I will get through enough to demonstrate that I made good progress,” she said.