Chaplains offer spiritual advice for those on the go 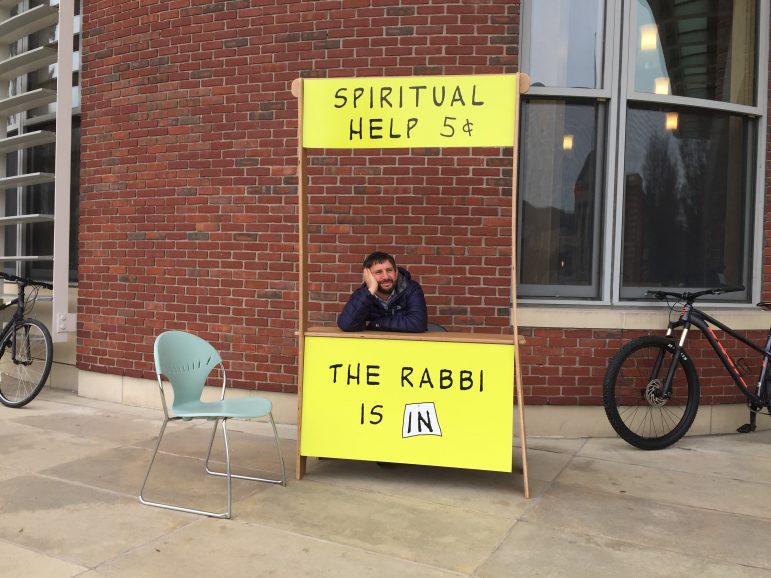 The chaplains can sometimes be found at the advice booth outside Paresky, where wisdom comes cheap. (Nigel Jaffe/The Williams Record)

In order to find spiritual guidance, many people head to a local place of worship to solicit the advice of a religious teacher. But the chaplains at the College have been experimenting with a new venue for connecting with students: a spiritual help booth.

The College’s Jewish chaplain, Rabbi Seth Wax, thought of the idea for the booth after seeing the concept in action in New York City. “Prior to coming to Williams College, I was the rabbi at a synagogue in Brooklyn… One day I was driving in [the city], and I was driving down Lexington Avenue when I saw a booth that actually looked like this,” he said, pointing to a picture on his cellphone of a pastor, Gregory Fryer, sitting behind a bright yellow booth outside Immanuel Lutheran Church. A sign above his head reads “Spiritual Help 5¢” in the iconic typeface of Peanuts, referencing the “Psychiatric Help 5¢” booth featured in the comic strip.

“I looked him up,” Wax said. “I just Googled ‘Peanuts,’ ‘booth,’ ‘pastor.’ So I found him, Reverend Gregory Fryer, emailed him and said, ‘Hey, do you mind if I borrow this idea for my synagogue?’ and he said, ‘That sounds great — go for it.’”

Wax did not end up creating his own booth during his time in Brooklyn, but he kept the idea in the back of his mind. After coming to the College, he decided to bring the concept to the campus community, collaborating with a number of College staff members to make it a reality. “Over the summer I emailed Facilities and Derek Cece, who works in Facilities, and kind of worked with [Randy Benoit in the Carpentry Shop],” he said. “In September, I got a call from Kyle Lawson, who works in carpentry… He had some questions, then he [said], ‘Yeah, I finished your booth.’”

Assistant to the Chaplains Nancy Luczynski made the signs, which say “The rabbi is in,” “The priest is in,” “The imam is in” or “The chaplain is in.”

Wax said he sees the booth as an opportunity to reach out to students. The chaplains at the College already make themselves readily available to those seeking guidance, but the booth, Wax believes, will help render them more visible to the campus community. “The idea was really just to be on campus, be outside when the weather is good and even inside when it’s not, really just to kind of invite students to talk,” he said. “I think one of the challenges of being in an office is that students need to come to you… So kind of going out in public and interrupting the normal flow of things in a kind of humorous way, I think… It’s intriguing enough and also non-threatening enough that it may lead people to say, ‘Hey, you know, actually, I do have a quick question.’”

While Wax is currently the only chaplain who has staffed the booth, Reverend Valerie Bailey Fischer, chaplain to the College and Protestant chaplain, and Imam Sharif Rosen, the College’s Muslim chaplain, will use it to offer their spiritual guidance in the future. Although the booth is still in its early days, Wax said he has already seen its capacity to promote meaningful engagement with students. “In an hour and ten minutes of sitting in front of Paresky, I [spoke] with eight people,” Wax said. “They ranged from all sorts of, you know, kind of philosophical questions, religious questions, personal questions… I think people have gotten something out of [the conversations].”

Those concerned about the five-cent price tag for spiritual advice need not worry. “[The price] is on one hand just a gimmick,” Wax said. “Having said that, I did collect 55 cents on my first day… I will say that what I’ve said to everyone is, ‘We’re running a special today — it’s five cents off.’”