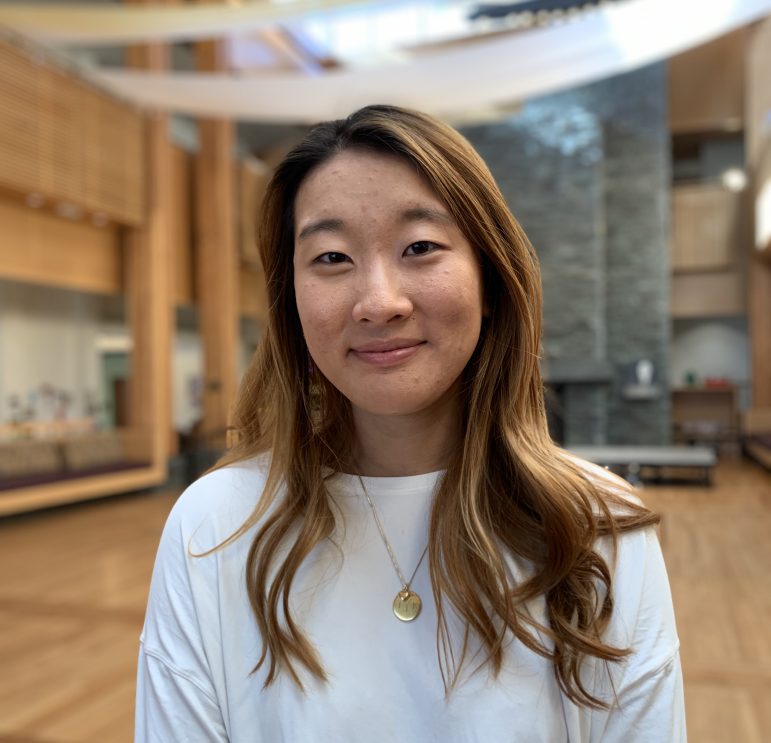 Each week, we randomly select a unix from a list of all current students at the College. So long as the owner of the selected unix is on campus, willing to be interviewed and not a member of the Record board, that person becomes the subject of that week’s One in Two Thousand. This week, the computer (using a very simple script in R) chose Jo Kim ’22.

I’ll wake up around 8 a.m., go down to Tunnel City and get a cold brew, iced, and do some work. Around 11 a.m. I’ll get brunch with my friends at Driscoll because they have the best food. After that, I’ll hang around Tunnel, maybe meet with a professor, and once it closes around 6 p.m., I’ll head over to the South Science Building because I’m a biology major on the pre-med track, so most of my chemistry and biology homework is done over in that space.

What got you into biology?

In high school, I was always interested in molecular biology, how the cell divides and reproduces. I did some research on that, but it was by no means high-level; it was just to get to know biology. I also had a senior captain who was a biology major and did a thesis here. I thought it was cool that you could do high-level research. So that’s how I got into it… I’m hoping to do a thesis [as well].

Awesome! I’m more of a Div. I and II person. Have you taken any of those courses?

Yes! I try to take advantage of the liberal arts experience. I know I’m a biology major now, but I might add an English major or philosophy because I think it’s good to have the whole perspective on everything rather than just be science-based… I’ve taken Art History 102 and an English class with a visiting professor, and [the professor] was really invested in the writing process — I produced a lot of work that I was proud of.

Interesting! What kind of work did you do?

It was about idleness and learning about how you can have productive idleness. For example, if you’re sitting down and doing nothing, how can you change that to be productive? How can you distinguish between those two? We also did a lot of philosophical readings… a lot of readings outside of my comfort zone. I’m more comfortable reading research articles, but this was more conscious thought processes from well-known philosophers.

I don’t really like Descartes. Not a huge fan of him. It’s too vague and broad.

Oh, yeah, I’m in a tutorial — my first tutorial — with Professor Julie Pedroni. She’s fantastic, one of the most understanding people, and she really emphasizes working [with what students know]. Coming in as a biology major focused on research-based articles, she helped me change that perspective by [looking at] philosophical ethics. And, she teaches work on biology and ethics, so it was a good way [for me] to transfer to more of a Div. I perspective.

“Philosophical approaches to contemporary moral issues.” We talk about, some of them you could say are sensitive topics, very controversial. We started with euthanasia, utilitarianism, and Kantian deontology. Then, we applied those [readings] to capital punishment and abortion. In a way there’s a science part to it, in that in euthanasia you have doctors, and abortion also has doctors playing a role. So [the class] brings these topics and sections and teaches you how to look at it from a more ethics-based perspective. We do a lot of thinking about what we ought to do as humans instead of what we can do as humans.

You’re from Minnesota? That’s cool — I’ve visited Minneapolis! What do you like about your home state?

I was born there and only started to appreciate it a lot more when I left. I think Minnesota is fantastic. We are connected to outdoor living: we go up to the cabin, fishing, hiking, it’s a versatile place to live. Personally, fall has been the main season that we do a lot of [activities]. Campfires, going on the lake and Thanksgiving! It’s a big deal in Minnesota. We have a ton of food. We also have the Minnesota State Fair. Do you know what that is?

Nope, tell me about it.

Woah! What’s your favorite one?

Sweet Martha’s Cookies. It’s one of the biggest attractions. They give you a whole bucket of freshly baked cookies. Economically speaking, she makes so much money from these four days, like almost millions of dollars. A bucket is $14 and it’s worth it. And, on the side, they have fresh milk that’s only a dollar. So you get a bucket of the cookies —

And you get the milk! Of course.

Yeah! You dip the cookies in the milk. I have friends who will buy four buckets.

That’s extreme, but I respect it. Anyway, back to campus — what do you do that’s not academic or golf-related?

I like outdoor living, and I was a WOOLF leader this past fall. To be completely honest, being pre-med and on the golf team limits how much I get to do. That’s just me personally; I have teammates who are on many committees, and in that way, I don’t want to say that [being on golf] restricts you, but it was hard for me to balance all of these things. That being said, I would love to be in a group. I remember signing up for them, but the schedule never worked out.

If you had no time restrictions, what club would you want to be a part of?

The art club [Ephs at the Clark]! Being there on a sunny day is beautiful, and looking at the art is amazing — we have a lot of famous works. When I took the art history class, I would learn about [various works] and then the following week, we would see them [in-person]. It’s so different seeing them on a screen versus in real life.