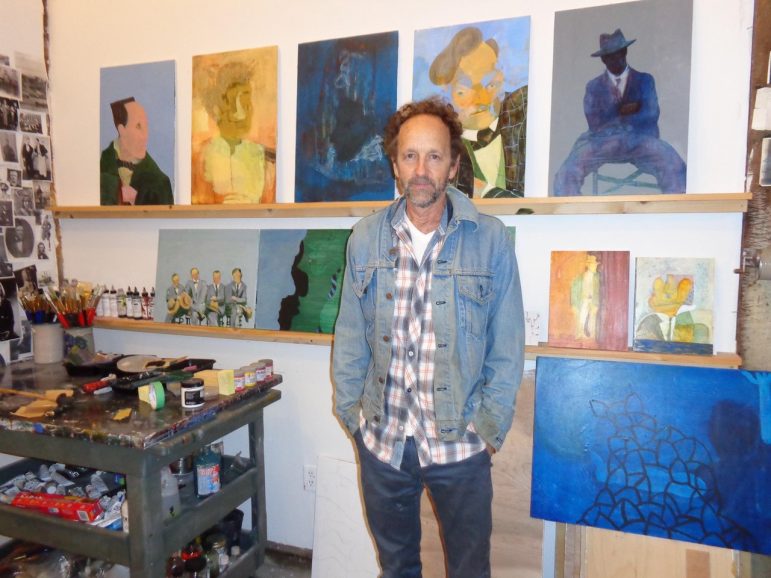 It wasn’t hard to pick out the sound of someone singing as I made my way through the empty halls of Spencer Art Building. Poking my head into the printmaking studio, I found Studio Art Assistant Douglas Paisley in his element amid a scattered collection of unfinished canvases and assorted paintbrushes. I remarked that I thought I’d heard someone singing. “Well, yeah,” he replied. “I do that sometimes.”

For just over a decade, Paisley has been a member of the Tenores de Aterúe, a group of four American singers who perform a polyphonic Sardinian folk style known as cantu a tenòre. Paisley founded the group with three friends, Avery Book, Gideon Crevoshay and Carl Linich, who each take on distinct vocal roles in performance as the bassu, mesu boghe and contra of the group, respectively. Book, Crevoshay and Linich are responsible for laying a sort of foundation for the soloist by way of deep, ringing overtones, while Paisley, the boghe, sings over them at a higher pitch.

When Paisley first heard cantu a tenòre, he was immediately inspired to try it out himself, but soon realized that the style is very difficult to learn without proper instruction. “I didn’t know that there was throat singing involved,” he said. “I just knew that it sounded really cool. And I really wanted to do it, but [Linich] knew enough to know that it was not going to be that easy.”

Dissecting the recordings in order to understand each of the highly specialized vocal parts was a tall order; figuring out how they might put these parts back together into a cohesive whole was another matter entirely. The project was put on the backburner until Linich discovered a YouTube video that explained, with unprecedented clarity, how cantu a tenòre works. “It was a couple of years later when he came across this video, and all of a sudden, there was the Rosetta Stone,” Paisley said. “Once you have that, it wasn’t too hard to break it down.”

With the help of that video, the group was able to more fully understand the different vocal roles, though feeling comfortable singing in the style was still no easy task. “It’s like learning a language: if you grew up speaking it, you don’t have to think about it, and you are a natural artist or musician in your language,” he said. “Learning a language is harder to do when you’re not an infant.”

As the boghe, or “solo voice,” Paisley is responsible for delivering the majority of each song’s lyrics, which are entirely in Sardinian, a language that he does not speak. “I was really into the voices of the singers… and the ‘flow’ they created, even though at that point we had no translations so I could only guess at the meaning of a few of the words,” he said. “There’s this whole other question of the language— how do you absorb that enough to actually say something?”

Paisley said he has made an effort to internalize the lyrics of some of the songs in order to better understand their artistic and emotional significance. “There are some songs that we’ve been singing since we started 10 years ago, and I know those words so well that when I sing them, especially if it’s the right occasion to sing them, it can be very moving,” Paisley said. “That gives me a little bit of a taste of just how much further you can go, and in a way, how it gets it a little easier. If you know what you’re saying, you don’t have to think about it so much— It’s less artificial.”

In 2011, a recording of the group performing in Williamstown was posted on YouTube. The video amassed tens of thousands of views, while comments began to stream in from accounts based in Sardinia: “Wow. Americans doing this??! Well done. Auguroni [Best wishes]! … Amazing! the evidence that music is an [sic] universal language. Thanks from a sardinian… Congratulations, Sardinian people like me are proud of you.”

Paisley said the overwhelmingly positive response took the group completely by surprise. “We didn’t know this at first, but we figured out by the response that no foreigners had ever tried to do what we had done,” he said. “When that video of ours went viral in Sardinia, we couldn’t believe it.”

Encouraged by their growing Sardinian fanbase, the group decided to visit the island for three weeks in June of 2013. The trip was a roaring success, as the singers from aterúe—“elsewhere”—were enthusiastically welcomed by established performers across Sardinia. They filmed much of the trip as they went along, and later started thinking about making a documentary.

“We didn’t have any plan in terms of the trip, much less what the film was going to be,” Paisley said, explaining that they got the idea to record their journey when “a friend of mine said, ‘You know, my son is a cinematographer, and he lives in Rome, and he speaks Italian. He might be interested.’ And so I wrote to him and said, ‘We don’t really have any money, but we can buy your plane ticket, and you can have a free trip.’ And he agreed.”

When it came to turning the footage into a documentary, the group benefited from the help of another unexpected connection. “My son, who went to Bard and is a video artist and animator, had heard us telling these stories,” Paisley said. “He’s the one who coined the ‘weird strange man music’ phrase, when he came in once with one of his friends and said, ‘This is my dad and his friends, they’re bonding over weird strange man music.’ One day, he said he wanted to take a crack at [the footage].”

For the next few years, Paisley’s son, Rufus Paisley, worked on piecing together a cohesive story from the Sardinian videos and other material they put together along the way. The film, titled Aterúe: The Singers from Elsewhere, was finished this year.

Lately, Paisley has been looking for ways to market the documentary to audiences here in the U.S. “I’ve been wanting to get into film festivals,” he said. “It’s sort of a hard sell, even though my experience has been that whoever watches it find it quite compelling. It’s sort of an obscure topic. What we’re looking for is somebody to just give it a shot.”

He said he is hoping to take the film abroad at some point down the road. “I have two goals for the film,” he said. “One is to get it online and make sure that lots of people can see it and find it. The other, which I’m working on now with [Visiting Assistant Professor of Comparative Literature and Romance Languages] Michele Monserrati, is to translate it, so we can do Italian subtitles and take it to Sardinia.”

Remarkably, Paisley has managed to find time to devote to the Tenores project, which he pursued in more depth during summers, while also maintaining a busy role in the art department, where he has worked since 1992. Finding that balance, he said, has not been easy. “[At one point] I was like, ‘OK, I’m going to dial this back now so I can concentrate on my painting,’ which has been the story of my life,” he said. “I have my studio practice, I have these other interests, but let’s not forget what I’m trying to do here.”

Book, Crevoshay and Linich have faced similar pressures, of course: when the group got together, Book was living in Durham, N.C., and working as a community organizer, while Crevoshay was performing as a dancer with Meredith Monk while also pursuing music and social work. Linich, meanwhile, is a scholar of traditional Georgian polyphonic singing, and has directed the Bard College Georgian Choir since 2011.

Whereas many groups have a rotating membership, Paisley said it is hard to envision the Tenores changing things up, and not just because they are the only Americans to have learned the cantu a tenòre style. “None of us are really replaceable, and I have yet to meet someone who can do Avery’s part,” Paisley said.

Moving forward, Paisley said he hopes to continue exploring his interest in music alongside the artistic work he does at the College. “I’ve come to accept that, even though I think that I’m primarily a painter, [music and painting] are at least equal in terms of my passion,” he said. “When you say ‘balance,’ I almost have to laugh, because I’m still moving— it’s not a stasis.”