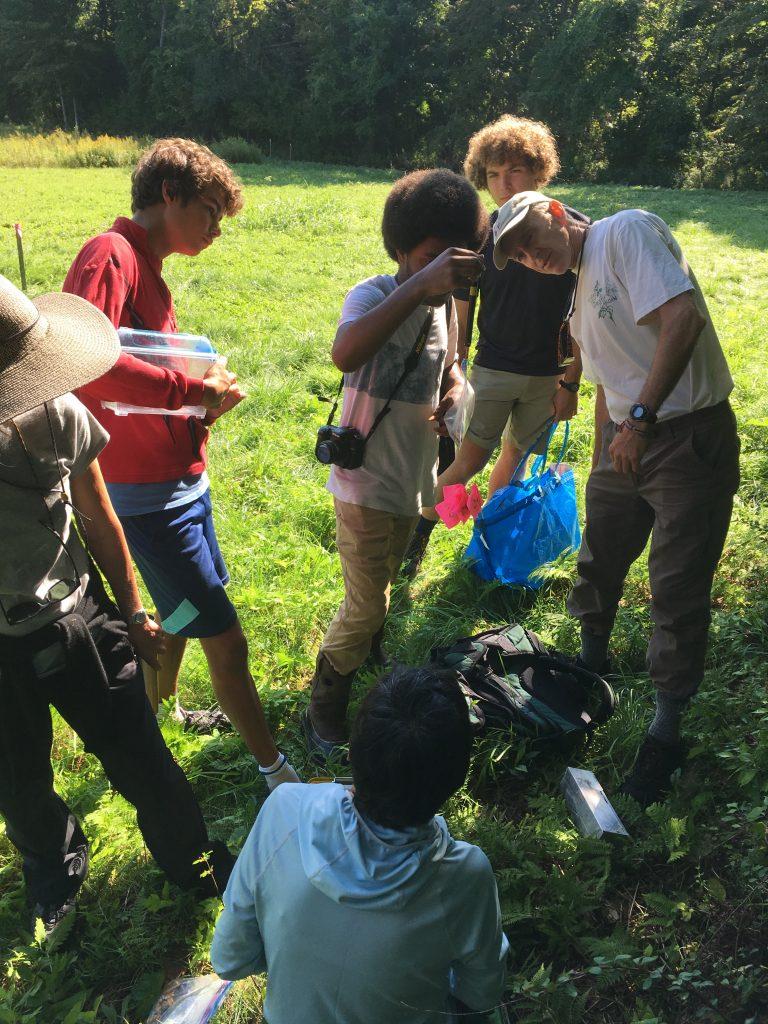 At the 2018 Berkshire Bioblitz, held in Hopkins Forest, students, scientists and community members came together to document wildlife in the area. Photo courtesy of Sarah Gardner.

This past weekend, students, biologists, naturalists and professors joined the general public in Hopkins Memorial Forest to participate in the ninth annual Berkshire Bioblitz – a 24-hour biological survey and educational program. The event began at noon on Saturday and ended at noon the following day.

Elizabeth Orenstein, outreach and education director for the Berkshire Environmental Action Team, explained at last week’s Log Lunch that a Bioblitz is a biological survey that takes place in a specific location over a specific period of time. The goal of the event is to catalog as many species as possible within an established time constraint. The result is a comprehensive catalog of regional species that informs land management, conservation efforts, biological research and local involvement. The first Berkshire Bioblitz took place in 2010 in Pittsfield State Forest and produced the first comprehensive species catalog for that property, with 947 species identified. Since then, the event has taken place in a variety of locations in the county, including Great Barrington and the Berkshire National
Resources Property.

In the talk, Orenstein explained the advantages of a Bioblitz. “Bioblitzes are a really concise way to get a survey of who’s living on a particular piece of property, and this helps us understand who’s there, why they’re important and how we can prioritize them,” she said. Occasionally, Bioblitzes lead to the discovery of new or invasive species. During the 2016 Bioblitz at Mount Greylock, Charley Eiseman, a local naturalist and insect specialist, discovered a new species of gnat, which he named Phytosciara greylockensis after the mountain.

Bioblitzes are an opportunity for locals to get outside, work alongside biologists and naturalists and learn about local wildlife. They are designed to increase public awareness regarding the benefits and variety of local wildlife. In addition to conducting a biological survey, this year’s Berkshire Bioblitz offered a variety of hands-on, family-oriented programming including bird banding, an invasive species identification exhibit, microscope and specimen set-ups and a water filtration activity.

Hourly shuttles, which began as soon as the Bioblitz started, left from Paresky Center to bring students to Hopkins Memorial Forest to participate in surveys, programs and talks and enjoy seasonal refreshments offered at the Bioblitz. The program included a variety of discussions relating to Hopkins Forest wildlife, including a pollinator walk led by biology professor Joan Edwards. Saturday evening, visitors enjoyed a moth light show and Rene Wendell’s “Owl Prowl” guided walk. “We had a whole bunch of amazing field biologists who study everything from moths to fungi to birds and fish and macroinvertebrates,” said Sarah Gardner, associate director and lecturer of environmental studies at the College. Gardner described her 13-year old son spending “hours identifying macroinvertebrates and putting them into vials for further investigation by students and scientists. It was a truly amazing event,” she said. Her “only regret was that more Williams students didn’t participate.”

Andrew Jones, manager of Hopkins Memorial Forest, agreed that the event was a success but shares Gardner’s disappointment in turnout, commenting that “given the splendid conditions, I would have hoped for higher attendance.” Approximately 150 people participated in the Bioblitz over the 24-hour period. The group was comprised of Williams community members as well as the general public.

According to Jones, “the data for many of the plants and animals are still being tallied.” Many life forms, including mosses and small invertebrates, require further lab analysis in order to be properly identified. Jones does not expect to have all surveyed lifeforms tallied for a few weeks. However, some notable discoveries from the survey include the spring salamander and the rare Connecticut warbler. Once completed, species data will be made available to the College community. Jones hopes that “having these results available might help spur further research into some of these organisms in the near future,” perhaps conducted by students. “These kinds of surveys are especially useful if repeated using consistent methods – therefore offering information on how plant and wildlife populations may be changing over time,” Jones said.