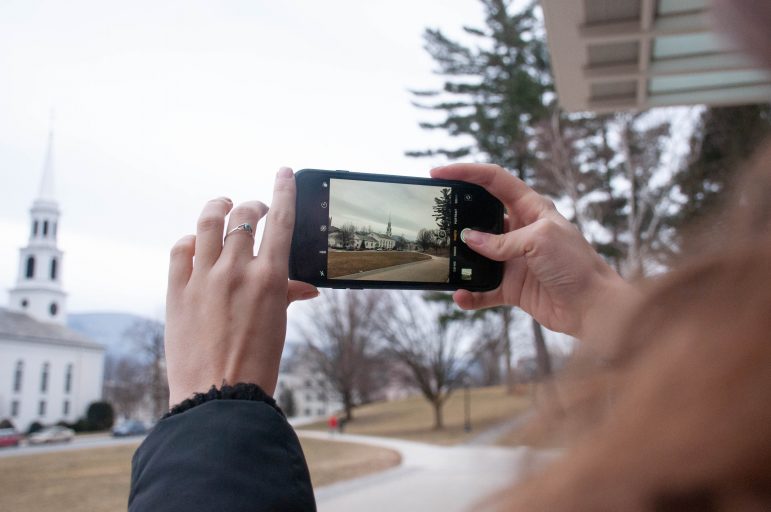 Rebecca Van Pamel ’19 has posted a photo taken from the same spot near Paresky each day since October. Sophia Shin/Photo Editor

Rebecca Van Pamel ’19 has posted a photo taken from the same spot near Paresky each day since October. Sophia Shin/Photo Editor

Standing on the steps outside Paresky, we all see the same view: a white church framed against the picturesque Berkshire mountains and Williamstown sky. Many of us have walked by this scene every day without consciously observing the view. But now, it has its own Instagram account.

Created by Rebecca Van Pamel ’19, @thesameviewfrompareskyeveryday is an Instagram account featuring daily photos taken from outside Paresky. As of press time, the page has 68 posts and 125 followers, although it is gaining traction as more students and alums discover it.

Van Pamel launched the account on Oct. 30, but she began taking photographs of this scene three years earlier.

“I’ve been photographing that perspective of campus since I was [a] frosh,” she said. “I would be walking up Mission Hill, coming up into that view, and I always felt compelled to take a picture of it just because it is such a nice image. It is just really striking. And then, sophomore year, living in Greylock, coming into campus again, I’d come into this view, and campus opens up to the front of [me]. I’ve always really liked this view.”

More recently, as a senior sentimentally taking photos of her final fall on campus, Van Pamel realized that most of her pictures of the campus were of this scene. She decided that she wanted to keep these pictures somewhere, so she created the account, where she now uploads a daily photo of the iconic image. While she would originally take pictures at any time of the day, she has now developed a preference for taking them between 3:45–5:00 p.m.

Van Pamel has been remarkably consistent in running the account. She has managed to upload at least one photograph every day she has been on campus, though she will occasionally ask friends for assistance with taking the photos if she cannot get to Paresky before the sun sets.

“I became a little obsessed with making sure my phone was charged enough to make it to Paresky,” she said. “And I had this external charger – I called it an iron lung – that I brought with me, so I could make sure my phone was alive and awake just to take a photo. Right before Christmas, my phone completely died on me. I was using my friend’s phone, and taking a photo and having her send it to me on Facebook.”

Because one cannot upload photos to Instagram from a computer, Van Pamel sent the photos to her boyfriend, who was studying abroad but knew the password to the account, so that he could upload them for her.

In spite of this dedication, there have been days when Van Pamel has been occupied with work and has had to upload a throwback photo from her sophomore or first-year days. Day Eight also has two photographs: one taken in the morning, and one taken when the now-famous double rainbow appeared.

Van Pamel has no formal experience with photography and has “no interest in pursuing it beyond personal record keeping.”

“Photography is just really personal,” she said. “I’m really sentimental about images. It’s not about making it beautiful or something. It’s there because it’s what I saw. I want it to be what I saw.”

Although she started the account for herself as something to look back on after she graduates, it now counts among its followers alums and other College offices, such as the Williams Libraries and Williams Outing Club accounts.

“If this is something for alums to see [in] reminiscence, then it is something valuable to continue,” she said.