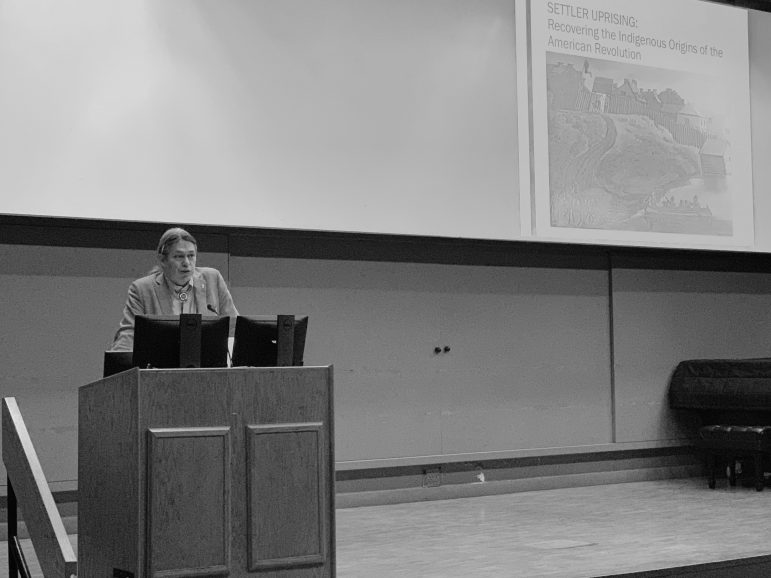 While historical narratives of the American Revolution have centered colonists’ opposition to British taxation, these accounts have neglected the role of Native Americans in early U.S. history, historian Ned Blackhawk argued on Thursday in this year’s Davis Lecture.

The Seven Years’ War  and Pontiac’s War led colonists to fear a third “Indians’ war,” according to Blackhawk, a professor of history and American studies at Yale University and a member of the Te-Moak Tribe of Western Shoshone Indians of Nevada. Interior land concerns and anxieties over relations with Native tribes were key to the growing settler sovereignty that led to the Revolution. Revolutionary history, Blackhawk said, has been incomplete without recognition of these “Indigenous origins.”

“The now flourishing field of Native American and Indigenous studies has fundamentally unmade longstanding conventional paradigms of American historical inquiry,” he said during the lecture, titled “Settler Uprising: Recovering the Indigenous Origins of the American Revolution.” “I believe that to really engage U.S. history requires unmaking the receives wisdoms, practices, temporalities and spatial frameworks that have long structured the realm of American professional historical inquiry,” he said. “Once we unmake such paradigms, we can engage American Indians in U.S. history more fully.”

At the start of the event, which drew over 50 attendees in Brooks-Rogers Recital Hall, Director of Special Academic Programs Clinton Williams acknowledged that the College “resides on the ancestral and spiritual lands of the Mohican people.” Williams elaborated on the Davis family and its legacy at the College before inviting Assistant Professor of History Christine DeLucia to introduce Blackhawk, who had taught DeLucia when she was a graduate student at Yale.

According to the Davis Center’s website, The W. Allison Davis ’24 and John A. Davis ’33 Lecture celebrates “brothers who, throughout their adult lives, made important contributions to equal rights and opportunity in the United States.” Allison Davis, the class of 1924 valedictorian, was a leading anthropologist who studied race and class in the U.S. South. John Davis was a political scientist known for his work on the Black civil rights movement.

Blackhawk focused his lecture on colonists’ attitudes toward Native people that developed through the Seven Years’ War and Pontiac’s War. In doing so, he resisted dominant narratives that focus on taxation as the crux of colonist’s discontents.

“Interior land concerns – as well as the crown’s eventually conciliatory relations with Indian peoples upset settlers just as much, if not more, than policies of taxation,” he said. “The stability and future of interior societies elicited far more consuming passions. Settler fears revolved around concerns from the West, not from the East.”

Blackhawk placed particular emphasis on two vigilante settler militias, the Paxton Boys and the Black Boys. Citing a concept developed by Lisa Ford, a professor of history at the University of New South Wales, he argued that these groups represented an emergent “settler sovereignty.”

On December 14, 1763, the Paxton Boys attacked an Indigenous community near present-day Lancaster, Pennsylvania, killing several members of the Conestoga tribe. The militia justified the act as self-defense, claiming that it believed members of the tribe were trading with Pontiac’s followers. On March 6, 1765, the Black Boys destroyed a shipment of supplies that were part of a diplomatic mission in an effort by colonists to make peace with Native Americans.

These two acts of violence, which have “escaped the attention of many Revolutionary historians,” were crucial in building the political movement that culminated in the Revolution, according to Blackhawk.

“Settler colonists now used their own forms of diplomacy, they used their own forms of legal reasoning and maneuvering, and when needed, they could use their own forms of collective violence to secure their goals and to establish legitimacy in the region,” Blackhawk said. “Initially unleashed in the first year of Pontiac’s War, such sovereignty had now hardened into a new political movement… I believe that the start of the fall of the British empire in North America can in many ways be traced to this moment, in March of 1765.”

Such insights, Blackhawk noted, have not been exclusive to the field of Native American studies. Military historian Fred Anderson, Blackhawk said, has argued that the Seven Years’ War was the most important military conflict in 18th-century North American history.

Understanding these stories, Blackhawk said, is necessary for scholars to “rethink and reorient longstanding assumptions about the place of Native peoples in the making of America.”