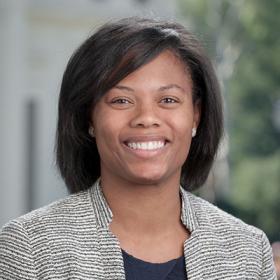 Moses’ research focuses on the architectural and urban landscape of Pacific island cities. In her current book project, Island Modernism/Island Urbanism: Encountering Statehood in Honolulu, Hawai’i, she argues that island cities can offer a unique, place-based perspective to urban studies given their spatial limitations and settler-colonial legacies. Moses’ commitment to her research was evident in her lecture, “Re/Shaping Honolulu’s Landscape.”

Moses’ lecture is the latest iteration of a series of talks and events highlighting the role the College played, and continues to play, in the United States’ subjugation of the Hawaiian islands; it follows the Williams College Museum of Art (WCMA) exhibit “The Field is the World: Williams, Hawai’i, and Material Histories in the Making,” and the interactive Sawyer Library exhibition on the Haystack Monument.

Moses’ lecture offered the Hawai’i State Capitol Building as a case study to explain the use of modern architecture to advance settler-colonial narratives in the Pacific and beyond. Finished in 1969, the Bauhaus-inspired Hawai’i State Capitol is clearly meant to evoke aspects of Hawaiian topography: Two cone-shaped legislative chambers allude to the active volcanoes present in the region, and a reflecting pool symbolizing the Pacific Ocean surrounds the building. Showing examples of other U.S. state capitol buildings, Moses brought home how unique of a design choice this was. Earlier state capitol buildings incorporated neoclassical elements  — in order to signal the individual states’ continuation of western democracy, the ancient basis for which is evoked by the Greek accents of neoclassical architecture. The only trace of this effort in the Hawai’i State Capitol is loosely neoclassical at best: The structure is encircled by columns, but they are made to resemble royal palm trees rather than the Doric or Ionic columns of ancient Greek temples.

Moses went on to argue that the capitol’s singularity goes further than its evocation of the Hawaiian landscape. Her discussion of a never-built U.S. embassy in Bangkok elucidated additional, more insidious meanings. Adhering to the international style, (an adaptation of Bauhaus meant to transcend culture and nationality) the embassy was to be entirely white and lightweight with a persistent allusion to Thai architectural forms. It is this imposition of aesthetic principles onto existing Indigenous architecture that animates Moses’ analysis of the Hawai’i State Capitol. For Moses, these design choices are not manifestations of cultural ignorance or insensitivity. Instead, they represent the settler-nationalist imperatives. The plan for the embassy in Bangkok was to signal the westernization of Thailand in the same way that the completion of Hawai’i State Capitol signaled the Americanization of the Hawaiian islands.

Moses continued this thread by describing how the state capitol’s resemblance to embassies of the period is paradoxically a display of both imperial might and national insecurity. Ever committed to the rhetoric of democracy, multiculturalism and self-determination, the U.S. had to find a way to square its subjugation of the islands with Hawai’i’s mythological, liberatory foundations. Moses explained how American political leaders accomplished this feat, claiming leaders portrayed Hawai’i as a cheery multicultural paradise in the Pacific, forever opening its arms and greeting all peoples of the world with a resounding “Aloha!” In this way, Hawaiian statehood could be reconciled with the blatant violation of its national sovereignty. Bringing the islands into the American fold became logical, as American media portrayed the Hawaiian islands as an extension of American multiculturalism. The imposition of a state capitol in the international style reifies this feeling of historical inevitability.

At the end of the lecture, Moses took questions from the audience. Subsequent conversation topics ranged from further inquiry into the state capitol’s aesthetic principles and possible Indigenous inspirations to a discussion of its relation to the nearby ‘Iolani Palace. Despite its focus on a single building, the lecture offered far-reaching applications. In its casting of modern architecture as a whitewashing tool, Moses’ framework can move outside of Hawai’i and break down the urban landscapes of places in the Pacific with similar colonial histories.