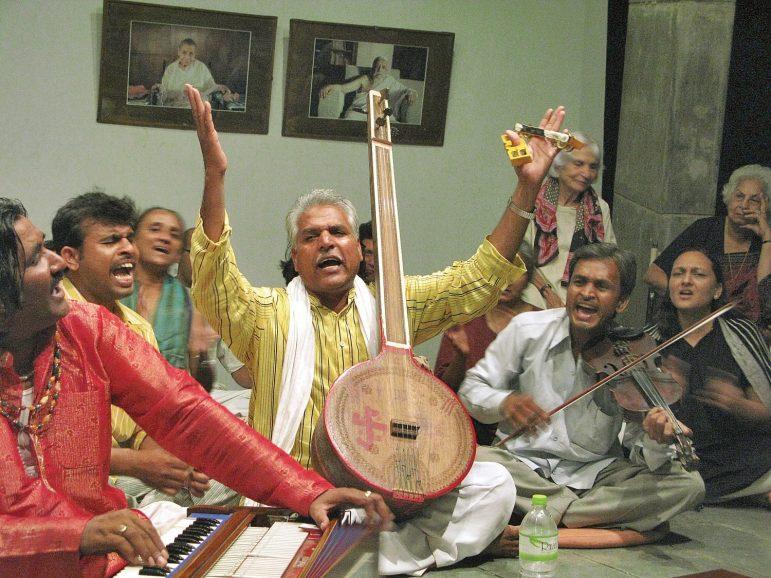 On Wednesday, Oct. 23, influential Indian folk singer Prahlad Singh Tipanya performed in Brooks Rogers Hall with his troupe, presenting the beautiful thematic performance “Songs of Love and Devotion from India.” Surrounded by a group of timki (a folk drum), Dholak (a two headed hand-drum) harmonium players and a powerful violinist, Tipanya passionately sang the work of the 15th century poet Kabir while artfully playing the tambura (a stringed instrument played in a similar manner to the mandolin). Tipanya and his group have toured across countries, completing concerts at many universities and institutions, transforming Indian poetry into engaging musical narratives that can unite people across cultures and languages.

Tipanya began his career as a village schoolteacher and has since become one of the highest regarded folk singers in North India, ultimately achieving the Padma Shri award, one of the most prestigious awards in India. Tipanya focuses on the verses of Kabir, interpreting the verses into profound musical messages for his audience. Kabir’s poetry comments on culture within India and specifically appeals to lower-caste Indians that are able to find refuge within his words. Tipanya brings to life these messages of devotion; he is often recognized as “India’s voice of equality,” pushing forward the “Bhajan revolution” within India, in which poetry is utilized as a force for cultural change.

Each Bhajan, or song, Tipanya performed filled the room with warmth and light. As the five performers and translator sat in the center of the stage, each focused musician contributed to the harmonious unity that touched the audience. After each Bhajan, the Hindi song was translated into English, revealing the specific thematic narratives of each of Tipanya’s impassioned performances. Tipanya’s vocal impulses entranced the audience with melodic accentuations and strong gestures. The music moved the audience into motion as they felt the powerful rhythms, despite the majority of the audience’s inability to directly comprehend the language.

Tipanya’s expressive songs animated a meaningful dialogue, promoting appreciation of our existence as individuals and motivating the audience to “listen to the spark within us” and to the internal “Guru” that exists in everyone. Tipanya emphasized the universality of the themes expressed despite their specific cultural derivation from India, using metaphors and evocative imagery to further his ideas. Specifically, Tipanya commented on the fleeting nature of life and its fragility, conveying that we need not “be proud of this body, the pink color will fade. This body is as fragile as a paper bag, one drop will melt it.” Tipanya reminded the audience to keep in mind the limited time we have, teaching us not to get entangled within the “thorny bush” that represents our egos, as this bush will trap us.

Through these meaningful Bhajans, Tipanya seamlessly blended thought and music, emphasizing that nothing will last forever except for our energy. Tipanya expressed that “before we lose our color,” we must provide meaning to our lives, remaining focused on good deeds, which will in turn keep us alive. the value of good. “We have been given this human form, wouldn’t it be nice if we could find this humanity within us?”

One of Tipanya’s Bhajans asked the audience “Where did you come from? Where are you going?” prompting us to find peace and truth within ourselves instead of deriving personal meaning from external sources. Tipanya continuously emphasized the value of selfless strength from within throughout his Bhajans, awakening us through his remarkable music, reminding us that “the one who is light, does not drown.” Tipanya and his group left the audience moved, grateful for the opportunity to witness this unique form of art.