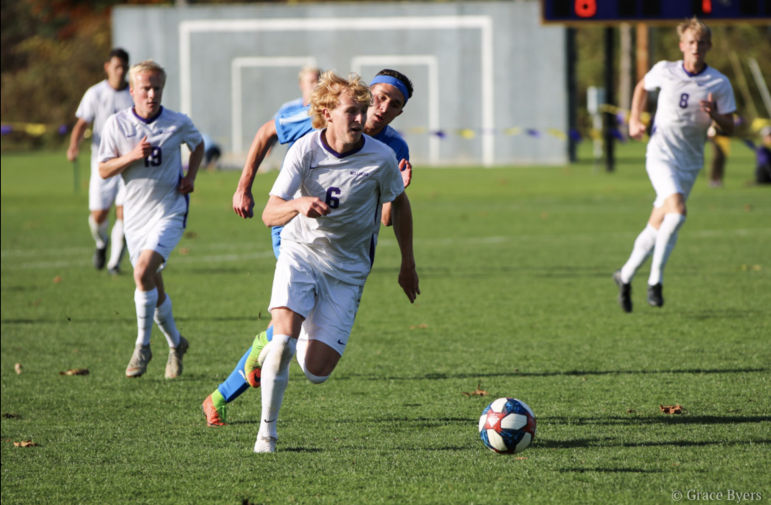 “We’re starting to become a more consistent attacking team that can produce goals in many different ways. It’s important that we continue to stay active, create for one another, and take intelligent risks in the right areas of the field,” head coach Erin Sullivan said after Saturday’s win.

The game against Hamilton had a quick start. The Continentals needed only three minutes to convert a goal and edge ahead. After winning the ball in the defensive third, Roth Wetzel sent an aerial through ball up to Aidan Wood, who broke past the Eph defense and dribbled up to the box, where he was one-on-one with Eph keeper Michael Davis ’23. Wood then took a perfectly placed shot into the right side netting, which Davis was unable to stop.

The men responded in the 12th minute of play, when the Ephs won a free kick in midfield. Defender Jules Oberg ’22 took the free kick, crossing the ball into the box. Liam Bardong ’20 jumped and directed the ball towards goal, but was blocked by Continental keeper Thomas Benson. Demian Gass ’20 reacted quickly and ran in from the left side, where he tapped the ball in off the rebound to tie up the point.

At halftime, the men had taken ten shots with four on target while Hamilton had recorded four with one on target. Benson made three saves while Davis had not yet recorded any.

The men found themselves managing possession and moving the ball up and down the pitch in the second half. At the 58th minute, they found an opening and broke the 1-1 deadlock with a free kick by Oberg in midfield. When the referee blew his whistle, Oberg swung the ball into the box towards the far-right corner. Benson charged forward to collect, but Bardong ran in from the right side and headed the ball past him into the far side of the goal, giving the Ephs the lead.

As the half went on, the Continentals were able to create some threatening chances. In the 88th minute of play, Hamilton won a corner, which was taken by Wood. Wood took an in-swinging corner into the box from the right side. As the ball came into the box, a gust of wind picked it up and took it into the goal towards the far post. Davis was unable to react and keep the ball out of his net and the teams were level once again. With his corner kick goal, Wood sent the two teams into overtime.

The Ephs came into overtime aggressively. They connected good passes and communicated well as they moved up the pitch. In the 8th minute of the first period of overtime, Nick Boardman ’22 elevated and headed the ball to the left post to win the game at 3–2.

At the end of the turbulent game, the Ephs had taken 17 shots with nine on target while the Continentals had taken 11 with three on target. Davis recorded one save and Benson recorded six. Each team committed eight fouls over the 98 minutes of play.

“We got a lot of good performances. The group that came off the bench in the second half was really strong and it’s a testament to our depth. I think our guys worked hard. I think we need to be a deep team to be successful in the postseason. [Wednesday] was a good example of that,” Sullivan commented.

The Ephs then defeated the Polar Bears (6–4–4, 1–4–4 NESCAC) in a shutout 2-0 match. One of the goals was made by Chris Fleischer ’20 in the ninth minute and another by Jake Saudek ’22 in the 41st minute. In the first half of the match, the Ephs had recorded eight shots with six on target, while the Polar Bears had recorded six with two on target. Davis made two saves in the half, while Polar Bear keeper Michael Webber made four.

In the second half, the score remained at 2–0 as the men recorded one shot while Bowdoin had three. Davis made two saves.

“It’s exciting to see our team gaining form and confidence at the most important point of the season,” he said.