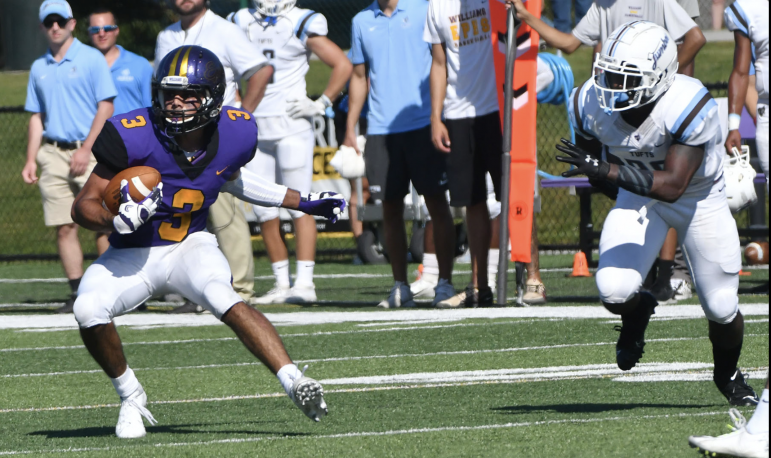 In the fall of 2016, football failed to pick up a single win, finishing 0–8. With an average of only 12.4 points per game, the Ephs were at a low point without much expectations from even their own fans.

Now, three years later, football is having one of its best seasons yet. Currently 6–1, after dropping only one game against Middlebury in their first game of the season, and undefeated (4–0) on their home field, the men are in the midst of a six-game winning streak. As a result, all eyes are on the men ahead of the Nov. 9 homecoming game versus Amherst. However, in the midst of victory celebrations and anticipation for the matches ahead, attention has recently been focused on one wide receiver in particular, Frank Stola ‘21.

Stola has become one of the main contributors to the success of the team this season. He has been awarded NESCAC Offensive Player of the Week twice in this season alone, once on Sept. 22 and the second time on Oct. 13. These acknowledgements, however, are not the only reason people are talking about Stola. He has already broken and currently holds records in single-game touchdown receptions (4) and receiving yards (233), touchdown receptions in a season (12), career receptions (141) and touchdowns (27). Stola is also the first Eph to break 2000 career receiving yards with 2105.

From Northport, N.Y., Stola is no stranger to the field. He’s been playing football for basically his entire life, starting his career in tackle football in third grade. While third grade seems like a young start, he explains that it’s actually quite late, since many people start younger than that. Stola adds on that football was part of his life even before his debut in third grade.

“Even before I started playing tackle football, I was playing flag [football] as a younger kid,” he said. “I was [also] watching games; it was just part of my life for as long as I can remember.”

Even now, football continues to be a dominant part of his life. He has played in all seven games so far this season, and he played in eight out of nine games his sophomore year and all nine games as a first-year. With so much playing time in his tenure as an Eph, the broken records aren’t as surprising or overwhelming to him as people might think.

On the clear afternoon of Sept. 21, in their first home game and the second game of the season, after their 17-13 loss against Middlebury the previous week, the men were eager to get into the winning mindset against another NESCAC opponent, Tufts. They knew that they had to put everything they had into the game as they had previously lost to the Jumbos in the last two years. After losing 21-13 and 28-21 games in 2017 and 2018, Stola and the team are more ready now than ever to break this streak.

In the end, the Ephs did just that as they came out triumphant, with a blowout score of 44-8. This game was also where Stola broke the College’s single-game record with four receiving touchdowns and 233 receiving yards, tying Darren Hartwell ’13 for the career receiving touchdown record with 21. While the team and fans were celebrating over the well-deserved win, this game also marked the beginning of Stola’s trend of broken records.

“I was kind of aware at the end of my sophomore year that those records were in sight, but I wasn’t really thinking about it as being so close. I wasn’t like, ‘Wow, I’m actually about to break this,’” Stola said on his initial reaction to his first time breaking the records. “It just kind of happens, you know, and I guess maybe that’s also because I’m not expecting to have the kind of day that I had that day. It’s a product of our offensive line having a great day, it’s a product of [quarterback Bobby Maimaron ’21] having a great day, it’s a product of the other receivers on the field doing things to get me open. So it’s my record, I guess, but it’s the team that helped me get there.”

After the monumental game against Tufts, the men continued their winning streak in a 41-10 game against Bowdoin on Sept. 28, where Stola broke his record tie with Hartwell in career receiving touchdowns with his 22nd touchdown, and a shutout 17-0 game against Colby on Oct. 5.

In the next game against Hamilton on Oct. 12, the team’s winning streak, along with Stola’s record-breaking streak, continued strong. In the 35-10 win, Stola’s eight caught passes allowed him to reach 139 career receptions, breaking the previous record of 135 held by Jon Drenckhahn ’07. He also broke 2,000 in his career receiving yards, becoming the first Eph to do so at 2,091 yards. His 12th touchdown in the game also brought him the record of the most receiving touchdowns in a single season.

Frequently seen working together to lay down plays and touchdowns, Maimaron and Stola have been known as a “dynamic duo.” Their coordination in passing and receiving have oftentimes been essential in securing victories and resetting the mindset of the team during difficult matches.

While they have been playing together for the last three years, communication, Stola stresses, is what allows passes and plays to be successful in football.

“I usually know when I’m about to get the ball… we’re [always] signaling with each other. Communicating is a huge part of football that a lot of people don’t realize is going down, how much we’re talking to each other. So that’s really important, being able to have a good relationship with Bobby,” Stola explained.

Essentially, in simpler words, he added, “I tell him to give me the ball, and he agrees.”

While Stola continues to break records and push the men towards a strong season, the stats and his individual spotlight are not his focus. The goal at hand, and for the remaining of the season, is to win as a team.

“The process of winning [is] where all the fun happens. You know, when your team’s rolling and everybody’s having fun, and everybody’s making plays, that’s just an awesome feeling. To feel unstoppable, I would say is the best feeling,” Stola said.

This was the case in the 35-7 win on Oct. 19 against Bates, where there were three receiving touchdowns, none of which were Stola’s. The team also secured a victory against Trinity on Oct. 26 in a 29-15 game, its first win against the Bantams since 2001. With only two more games left in the season, one against Wesleyan on Nov. 2 and the much anticipated homecoming game against Amherst, the main goals of the team along with Stola, is simply to work together and play well to potentially secure a championship, which doesn’t seem too far away anymore.

“I can break all the records in the world, but [I want to win a] championship here. So I’d like to get that done. I’m not sure what other goals. At this point we’ll keep the goals at doing anything I possibly can to ensure that we win,” Stola said.