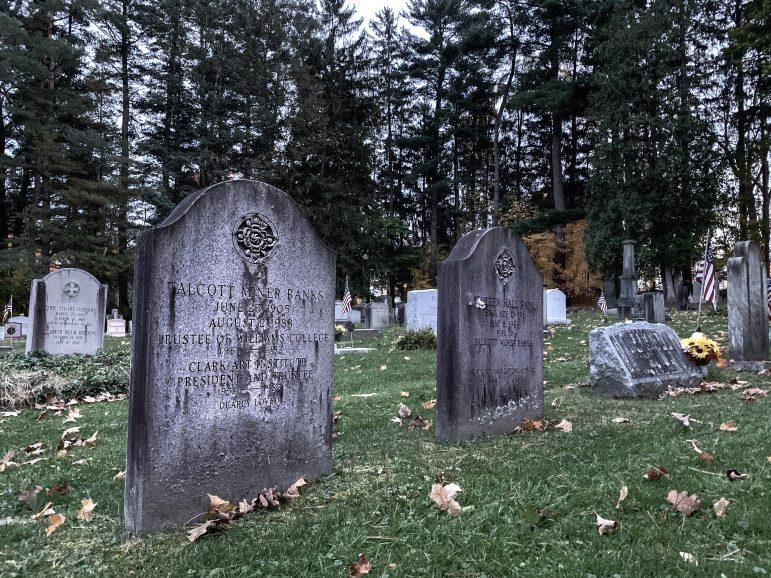 The College cemetery has served as the final resting place for generations of presidents, professors and other members of the College community. (Ethan Dinçer/The Williams Record)

“Guess where I’m going to be buried,” said Professor of Philosophy Joe Cruz ’91 to his cognitive science class as the last few students filed into the classroom. “The cemetery next to Mission.”

Cruz is one of dozens of current faculty members who will be buried in the campus cemetery, an opportunity afforded to select members of the College community including, according to the faculty handbook, “the immediate lineal descendants of those currently interred there, trustees, the president, the treasurer, the college librarian, senior staff, and those with emeritus or retired status in any of the above categories; tenured faculty and faculty emeriti; and the spouses or domestic partners and unmarried children of all the above.”

Many prominent figures from the College’s history are buried in the cemetery, including Mark Hopkins, Robert Gaudino, Jack Sawyer and Edward Lasell, whose headstone is the cemetery’s oldest. Aside from the expansion of the cemetery grounds in 1882 and the abolition of the interment fee in 1911, not much has changed about the cemetery since the first interment in 1856.

Professor of Romance Languages Gene Bell-Villada said the option to be buried there is one of the more unusual benefits conferred on tenured professors at the College. “There’s a kind of a joke that goes around the faculty,” he said. “We call it the final perk.”

Professor of Political Science Emeritus Kurt Tauber, who visited the cemetery twice monthly for many years after his wife was buried there in 1998, agreed. “You can think of it as one of the great freebies at the College,” he said. “I’ll never have to worry about mowing the lawn.”

One of Tauber’s former colleagues, Professor of Political Science Emeritus MacAlister “Mac” Brown, is buried not far from Tauber’s late wife. Brown’s widow, Adriana Brown, said she is glad the location of her grave reflects social circles of years past. “I was happy with the plot because it was near many of our friends,” she said. “My husband, Mac, and Kurt were colleagues. I feel blessed to ‘lie’ next to Mac and then be with so many friends… where we all gather together eventually.”

Tauber retired in 1993 after more than 30 years at the College. Looking back on his long career, he said he sees a metaphor in the way professors and students think differently about the cemetery: Whereas students are in a sense eternally 18-22 years old, rarely thinking about death or senescence, professors often spend large parts of their lives at the same institution.

“At first you are maybe 10 years older than your students; then you are twice their age; then they are the age of your grandchildren,” he said. “You are the only one who ever grows old. Your students are always the same age.”

Tauber, who celebrated his 97th birthday this month, said the cemetery raises questions for him about the implications of the age difference between faculty and students. “It makes you think about perspective, and the difficulty of empathy,” he said. “Can I still imagine myself as a 20-year-old student? I’m sure the students can’t imagine themselves as 80, or 90, or even 50. Back in the 1970s, they used to say, ‘Don’t trust anyone over 30.’”

For students, who are neither eligible for burial in the cemetery nor frequently faced with the question of where they will be buried, the cemetery often serves as a hangout spot after dark. Regina Fink ’22 planned a 20th birthday celebration in the cemetery, calling it “a funeral for my teenage years.”

Lydia Duan ’21, who is a junior advisor, said she might think twice about being buried there herself knowing what students get up to in the cemetery. “If I were a tenured professor, I would not want to be buried there because I wouldn’t want stoned frosh dancing over my dead body.”

Despite the possible drawbacks presented by student activity in the cemetery, Bell-Villada said the decision to be buried in the cemetery was obvious. “It’s a no-brainer,” he said. “It’s the easiest thing. Why not?”

Beneath Bell-Villada’s name on his gravestone is the nickname that he said was his late wife’s primary term of endearment for him: “El Oso.” In the same place beneath his wife’s name, of course, is “La Osa.” Bell-Villada said that in choosing the epitaphs on the headstone, he “wanted to recognize our relationship… and what she did for me.”

Senior Lecturer in English Paul Park said that knowing many of the people buried in the cemetery has changed how he thinks about individual graves and the cemetery as a whole. “For every stone, there’s a story,” he said. “What’s fun is to think that you can see in people’s choices a last expression of their personality. I think of these as people rather than gravestones.”

Park has unusually good reason for saying so. His parents, Professor of Physics Emeritus David Park and Senior Lecturer in English Emerita Clara Claiborne Park, were both long-serving employees of the College and are buried in the cemetery. Growing up on campus, Park was in a unique position to get to know a now-bygone generation of faculty at the College; he stopped at one grave to cheerily recount how the couple interred there were the first adults he saw whom he was able to identify as drunk.

Reverend Rick Spalding, who served as chaplain to the College for 17 years, said the cemetery is made all the more meaningful by the popularity of some of the people buried there. “Generations of our predecessors would probably say that the fact that Mark Hopkins’s bones are slowly becoming part of the soil on which we all walk is part of what continues to connect us to the best parts of our proud past as an institution,” he said. “We are still growing in that soil, but it’s made that much richer by his composting there.”

Spalding said there is real value in the fact that being buried in the cemetery means you become a part of the campus in a truly literal sense. He said there is no better example of that impact than Professor of Chemistry Emeritus J. Hodge Markgraf ’52.

Park pointed out that he would not be eligible for interment in the cemetery if not for his parents. “I think [the College] would chase me away,” he said. “I think they’d say, ‘No, you haven’t earned this.’”

The barrier: tenure. He and his sister, Jessica Park — who works in the mailroom and for whom it is named — have never been eligible for tenure. Between the two of them, they have worked at the College for more than 50 years.

Spalding reflected on the ways tenure operates as a means to enable professors to establish true permanence at the College. “The cemetery gives you this interesting lens through which to look at this remarkable practice we have of granting faculty members permanence through tenure,” he said. “Permanence is something that’s not accessible to us as human beings, but that doesn’t stop us from trying for it, and cemeteries are one place where you can see our attempts to make permanent marks.”

Park said eligibility for burial at the cemetery is part of a much larger system of entitlement afforded to tenured faculty. “There are many, many different privileges that certain parts of the employee base at the College are privy to and others aren’t,” he said. “[Burial] is the ultimate claiming Williams.”

From his point of view outside the dog-eat-dog world of tenure, Spalding speculated about the ways people on either side of the aisle view campus. “It has always seemed to me that there must be a huge difference between the ways untenured and tenured faculty look at the College,” he said. “Tenure is not about the cemetery, of course, but in a sense, the cemetery is about tenure.”

For Cruz, meanwhile, burial in the cemetery is entirely about inclusion. Attaining that privilege, he said, represents a milestone in his journey from student to professor. “I say I expect to be buried there partly as a joke and a wink, but very much also because it’s a metaphor for my own sense of belonging at Williams,” he said. “It wasn’t always so. Puerto Rican, first-gen college student, urban public schools, a tough first year of terrible grades and self-doubt. I wondered vividly and frequently whether I belonged here. That seems far away now, and no one, not a controversial campus speaker, not a skeptic about affirmative action, not a crappy commentator on whether Williams should have worked so hard to make the campus more inclusive, no one can make me feel anymore that it’s not my place. So, yeah, it’s my cemetery someday.”