‘The Favourite’ brings chaos to court 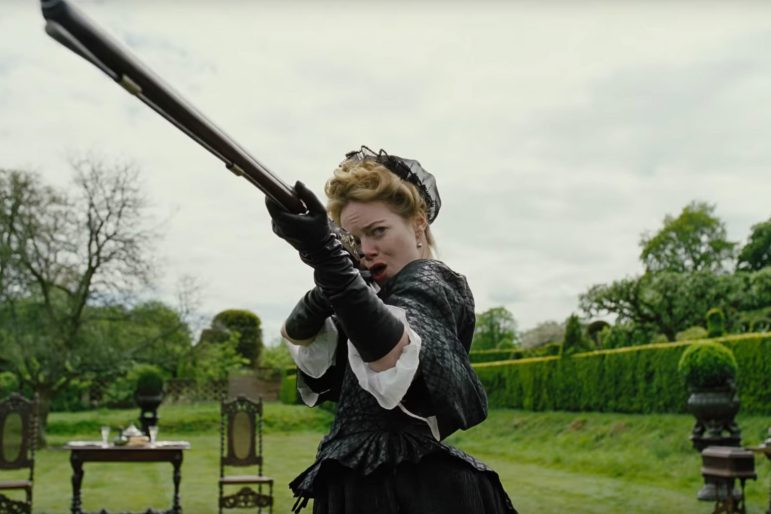 Set in the 18th century, director Yorgos Lanthimos’ new comedy The Favourite is rife with surprises. Photo courtesy of ICA.

Set in the 18th century, director Yorgos Lanthimos’ new comedy The Favourite is rife with surprises. Photo courtesy of ICA.

You thought you knew what you were getting yourself into? You thought wrong. The Favourite, which began showing at Images on Saturday, is a cutting tale of ruthless competition between two countries at war and two women vying for their queen’s favor. The former struggle provides the backdrop for the latter, in which the film takes its interest.

It’s the early 18th century, and England is at war with France. The monarch in power is Queen Anne (Olivia Colman), an ailing, irritable woman often relegated to the sidelines of political discussion by her friend Lady Sarah (Rachel Weisz). More interesting than any political maneuvering is the constant maneuvering of Lady Sarah and the new maid Abigail (Emma Stone), an ex-lady who was blacklisted after her father submitted to his gambling addiction.

The Favourite is purposefully ambiguous about its heroes and villains. One goes into the story assuming Abigail is the “good guy,” the character they should be rooting for. As the movie progresses, however, it becomes clear that Abigail is just as flawed as her supposedly more manipulative counterparts. Lady Sarah appears the victim on more than one occasion. The morally gray characters of Lady Sarah, Abigail and Queen Anne compel the viewer to question their own standards of morality. By the end of the movie, it is unclear who really “won,” as put by Abigail, since every character acts on a personal definition of right and wrong.

All in all, I would describe the movie as surprising. [Spoilers ahead!] Nothing is quite as it seems, and no  character embodies a fixed stereotype. Abigail’s backstory makes us more sympathetic to her actions and makes her appear timid and humble. Slowly, Abigail is revealed to be a traitorous, lethal social climber. Lady Sarah appears manipulative and haughty, yet as she suffers at the hands of Abigail, viewers grow more inclined to see her as a well-meaning woman who cares more for her country than for herself.

Exceeding the movie’s political or historical value, what most intrigued me were the relationships, the character development and the director’s exploration of the human psyche. One leaves the theater wondering if we are we all greedy, irredeemable creatures who would sacrifice love at the first sight of power.

Queen Anne, despite her status as the most overtly powerful person in the movie, is left wanting for genuine interactions and untainted loyalty. Everyone around her views her as a vehicle for their own upward mobility. Is the movie a cry for genuine human interaction or a sordid commentary on the rarity of true love in an inequitable world where power is concentrated in the upper echelons of society?

A classical soundtrack enhances the eeriness of the film, complementing its thought-provoking and unsettling content. One particularly memorable scene depicts Queen Anne being treated for her bruised leg. Her groaning and weeping are perfectly intertwined with two haunting beats – a call and response. The concluding scene, in which shots of rabbits overlap with Abigail being forced to rub Queen Anne’s legs (her head bobbing back and forth in a potential imitation of fellatio, a call back to her days as a concubine) are intermixed with the same lonely, isolated notes of the aforementioned  scene. The music is simple but aptly conveys a sense of unease.

A proper review would be incomplete without mention of the movie’s exploration of sexuality. It is well known that aristocratic courts of almost every society were pretty gay, from Elagabalus to Henry III of France, but literature and film rarely explore female sexuality in the royal court.

What is perhaps most interesting about the dynamics between Queen Anne and her ladies is the use of sex as a currency for power. Abigail and Lady Sarah wield their sensuality and beauty as a way to garner Queen Anne’s affection. Rather than featuring as the central theme (in the form of an expose), sexuality is weaved into the movie’s other, more enticing subject matter.

All in all, The Favourite is a peculiar, shocking narrative with confusing, complex characters. The film is worth watching for all the ways in which it upheaves expectation.