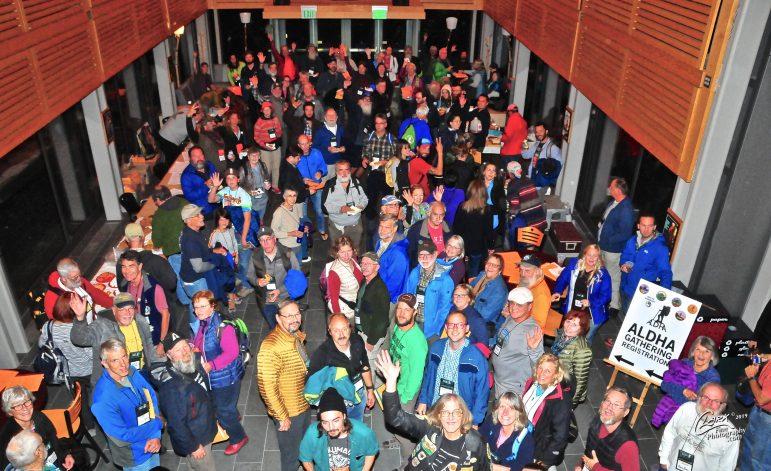 The Appalachian Long Distance Hikers Association (ALDHA) held its 38th annual Gathering at the College from Oct. 11–14, marking the third time the College has hosted the Gathering, which was sponsored this year by the Williams Outing Club (WOC).

A series of workshops, presentations, panels and ALDHA business meetings took place in Paresky Center, Griffin Hall and Greylock Hall, while performances took place in the ’62 Center for Theatre and Dance and the Bernhard Music Center. All were free for members of the College community to attend.

ALDHA board member and Gathering facilities coordinator Jim Niedbalski expressed gratitude on behalf of ALDHA for the College’s willingness to host the Gathering.

“Williams College offers great facilities, and we appreciate the sponsorship of the Outing Club, and thank [WOC Director] Scott Lewis for his support of the event,” he said. “Everyone at Williams has been great to work with on this event. With the Appalachian Trail (AT) a few miles away, and fall in full splendor, there’s no better place to be on this weekend.”

“Williams has done this as a community event,” he said. “Since ALDHA is under the umbrella of the Outing Club, the College has really opened up their doors.”

Lewis encouraged students thinking of pursuing long-distance hiking to attend workshops and engage with attendees. “It’s an amazing opportunity to mingle with people who are basically adventurers,” he said.

According to Lewis, the attendees numbered in the hundreds. Most camped 3.5 miles from campus at Carmelite Fields, on the property of Williamstown resident Eric “Mini Mart” White. On campus, all wore name cards, many of which included the “trail names” some use while hiking.

On Oct. 11, attendees registered at White’s barn, while the opening session took place in the ’62 Center that evening. On Saturday, a marketplace featuring ALDHA merchandise and used gear was set up in Greylock, while the Gathering program listed almost 50 different workshops and events throughout the day. In the evening, photographer Bart “Infinite Dust” Smith, the only person to have walked all 11 National Scenic Trails and 19 National Historic Trails – a total distance of over 50,000 miles – gave a presentation in the ’62 Center.

On Sunday, a hike to Mt. Prospect on the AT took place alongside an official ALDHA annual meeting in the morning and workshops in the afternoon. In the evening, actress Anne Van Curen starred as Emma “Grandma” Gatewood in a monologue about her experience as the first woman to hike the AT alone in 1955.

“We’ve got a lot of people who are appreciative, who want to give back,” Bungay said. “We try to afford them the opportunity to do something meaningful.”

The attendees came from a wide range of ages and backgrounds. Some made the trip from as far away as Texas and Oregon, while a small number hiked directly to campus from the AT.

Many attendees had been to previous Gatherings over the years, like Dennis “Forward March” Webster, who traveled from Rhode Island for the event. “I’m having a good time,” he said. “I’ve been coming to the Gatherings almost every year since 1994.”

Bill “Sprained Rice” O’Brien, meanwhile, has been to 31 Gatherings in a row, which Martha “Teach” Wingeart said makes him the unofficial record holder. O’Brien is the editor-in-chief of ALDHA’s newsletter, the Long Distance Hiker, which was selected in 2016 as the best newsletter in its class by the APEX Awards for Publication Excellence. Wingeart came to the Gathering from Maryland with her husband, Mike “Wing-Heart” Wingeart, who is serving as merchandise coordinator for the Gathering.

Though many attendees are experienced hikers, O’Brien said, some are new to the activity and hoping to learn more about it.

“One of the goals of the Gathering was to encourage people who are thinking of hiking the AT,” O’Brien said. “We call them ‘Dreamers,’” Wingeart added.

As such, certain workshops, including “Dreamer Prep – AT 101,” carried a designation that allowed participants to earn credits toward an ALDHA Long Distance Hiking Diploma. Those who completed a total of five hours of workshops could receive their diploma in the mail.

In exchange for sponsoring the Gathering, WOC will receive a substantial donation from ALDHA. “The second time we hosted them, we used that money to buy hiking boots for our program. It was the first time we’d invested in hiking boots,” Lewis said.

WOC is splitting this year’s sum, which was close to $1000, with the College’s dining services as a token of appreciation for their work during the Gathering.

“[Dining services] were not aware of what was happening because there was a misstep in communication, but they didn’t flinch,” he said. “The people here on staff do whatever they can to make it work. They were so outstanding.”

Lewis said ALDHA will return to campus in either two or three years, continuing their partnership with the College.