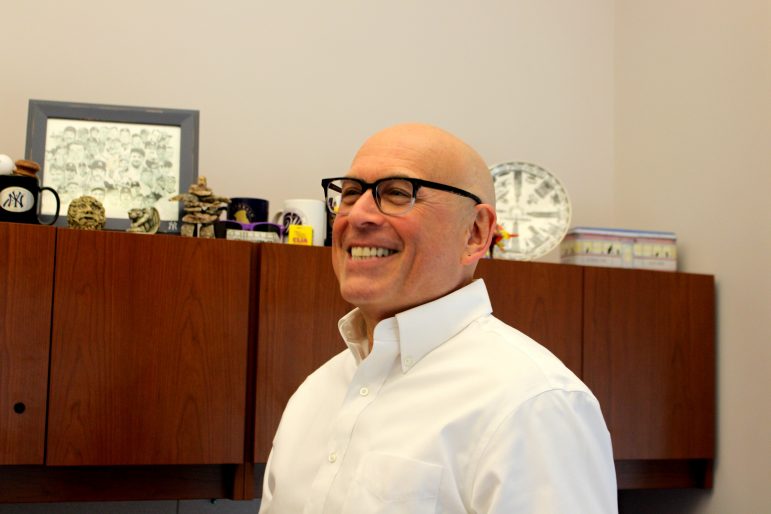 Steve Klass plans to retire in June after 13 years at the College. (Nicky Wu/The Williams Record).

President Maud S. Mandel announced to the campus community on Monday that Vice President for Campus Life Steve Klass will retire at the end of the academic year. The functions Klass oversees will be redistributed to the offices of the dean of the College and the vice president for finance and administration, as part of a broader reorganization.

Klass first came to the College in 2006 as vice president of operations, a new position at the time.

“It was a great transition from what I’d been doing at the University of Chicago, where I’d been the vice president and dean of students, in that it had a broad range of really large operational pieces and things like human resources and risk management and a lot of things that I’d been able to work on tangentially before, but was really interested in having an opportunity to do more and more directly when I got here,” Klass said. “It really was a great way to sort of get dropped in to a new community both on campus and off and get to know folks right away and build those important relationships.” In this role, he oversaw the construction of the new Stetson-Sawyer project, as well as Hollander and Schapiro Halls.

Klass moved to his current role as vice president for campus life in 2010-2011 under then-President Adam Falk’s reorganization of the College’s senior staff. Klass’ portfolio in this role has included supervision of dining services, campus safety and security (CSS), the chaplains’ office, the Center for Learning in Action (CLiA), health services, Integrative Wellbeing Services (IWS) and the office of student life (OSL), amongst others. Klass said that this reorganization allowed both him and then-Dean of the College Sarah Bolton more time to focus on the individual areas they supervised. “We were able to spend time on certain things because we were able to do more long-term internal strategic planning with each one of [our functional areas], I think we’ve really seen that come to fruition,” Klass said. “And I think this is just an ideal time now to think about a reorganization that recombines those pieces.”

Following Klass’ departure, the supervision for these functional areas will shift to either the dean of the College, who will supervise the student-facing support functions, or the vice president for finance and administration, who will supervise the more administrative offices. Some of the functions that shifted to Klass’ office from the dean of the College under Falk’s reorganization, such as health services, IWS (then psych services) and the chaplains’ office, will now return to the dean. Others, such as CSS, were originally part of the dean of the College’s portfolio, then Klass’, and will now go to the vice president for finance and administration.

This realignment is part of a broader strategy to refocus resources on supporting student life at the College. “The goal was to bring together all aspects of student life into one office, particularly as our strategic planning work seeks to take full advantage of the residential model that is so central to Williams college,” Mandel said. “Throughout the strategic planning process we have been emphasizing that learning takes place in the classroom, but also in the residence halls, in our students’ extracurricular activities, in our students’ public service commitments, etc. This new structure gestures to the fact that learning, which takes place inside and outside the classroom, cannot be separated into segments.”

Dean of the College Marlene Sandstrom expressed excitement about the consolidation of student support functions in her division.  “Shifting residential life, student organizations, health, chaplains and CLiA into the Dean of the College division will allow us to think  more holistically about students,” said Sandstrom. “Over the next few months we will firm up additional details of the restructuring, as well as begin to envision some exciting collaborations that might emerge as a function of sharing a single division.”

Vice President of Finance and Administration Fred Puddester will assume responsibility for dining services, CSS and the administrative functions of OSL. He noted that the existing partnerships and the remaining timeframe of the year will help make the transition easier. “Fortunately, many of these departments already work closely together and this change will only strengthen those relationships,” Puddester said. “For example, facilities operations is already in my group and they work closely with dining services, campus safety and conferences, all of which will join the team.”

One of the defining challenges and initiatives of Klass’ tenure as vice president for campus life was student demand for an increase in mental health services, alongside calls for a diversification of clinical staff. The change from psych services to IWS included staff recruitment and training programs, an increase in staff hiring and diversity and a new focus on skills-building. “There was a lot of thinking that we wanted to do two things at once. One was to be able to build out both the number of therapists that we have, but also to be able to think about the ways in which we could build diversity, not only of the individual therapists themselves, but the diversity of the therapeutic approaches they brought with them,” Klass said. “We want to be able to build a core competency in holistic self-care that students take with them in the same ways that we think about your core competencies academically, intellectually, athletically, artistically, all the aspects of your life on campus.”

Another of the major initiatives Klass oversaw was the establishment of CLiA, created under Falk, and the expansion of its community engagement and experiential education programming. “The Center for Learning in Action was established under Steve’s leadership, and nothing could better epitomize his priorities, his values, and his commitment to students and their lives in the community,” Falk said.

Klass’ priorities for the remaining year, in addition to the transition of many of his responsibilities to other offices, include working with College Council on improving their governance and conducting an external review of CSS following complaints, particularly from Black and Latinx students, of negative interactions with CSS. “[I’m] really interested to see what we can do to really bolster [CSS’] work, to see what are the best practices out there in terms of protocol and policy and practice to ensure that their work and their relationship with the community is the absolute best that we can make it,” he said.

In retirement, he plans to pursue creative projects in music and writing, and spend more time with family. Colleagues across the College’s senior staff, past and present, spoke highly of his contributions. “Under Steve’s guidance, we have seen innovation and growth on so many fronts – in health and wellness, experiential education, student leadership, and more,” said Sandstrom. “On a personal level, Steve has been a true partner to me in all of the most important ways – always generous with his time and ideas, quick to offer encouragement and kindness, and eager to build connections between our areas.”

“I’ve never worked with a more tireless advocate for students than Steve,” said Falk. “And this is because he deeply loves and believes in students, in who they are and in what, with the right support from the college, they can become.”