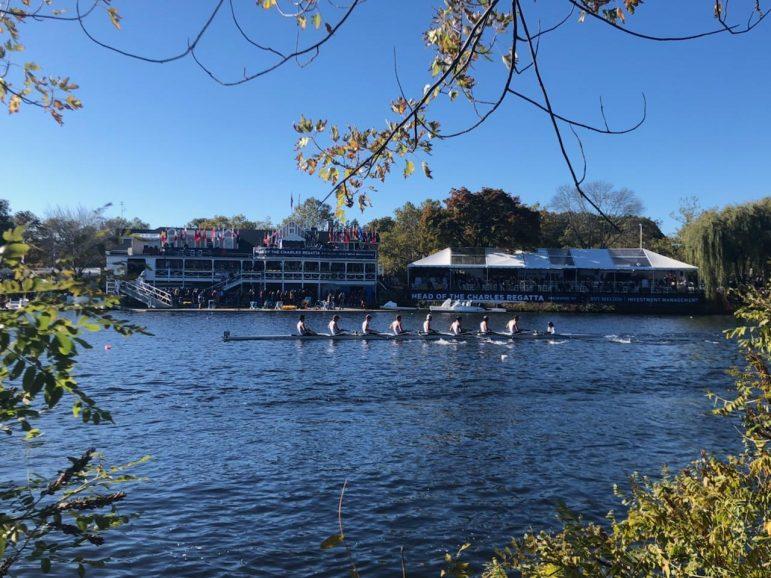 Men’s crew traveled to Boston for the Head of the Charles regatta last weekend, entering a 2V 8+ into the club 8+ event on Saturday, and their 1V 8+ into the collegiate 8+ on Sunday.

The 2V put together a very strong early showing to finish 18th out of the 39 boats in the event. However, a penalty cost the Ephs a minute and knocked them down to 30th place.

After rounding the magazine beach turn and passing onto the power-house stretch of the river, the men quickly got to work hunting down the boats ahead of them. They rowed past a club who had traveled all the way from China to compete before reeling in Washington College after the first bridge. Before Weeks Footbridge, the men quickly overtook Manhattan College, but the boats clashed oars and nearly collided heading into the bridge. This incident resulted in a penalty for the Ephs.

Despite the chaos, coxswain Piper Higgins ’21 maintained a tight course as her boat quickly jumped out ahead of Manhattan following the clash. Through the rest of the course, the Ephs continued to push back the crews they had passed, while Higgins steered a perfect line around Eliot Bridge and the final turns. With an energetic final sprint, the boat crossed the line in 15:38.6.

Seven-seat Gus Nordemeyer ’23 thought his crew was “able to stay internal the entire race and focus on our rhythm, despite rubbing up against multiple boats during the piece.” He was proud of the crew’s “aggressive pace off the start” and ability to sustain that aggression.

Two-seat Collin Dent ’23 felt similarly, reflecting on how the crew “demonstrated the strength of the boat and the program as a whole.” Despite the penalty, Dent felt confident that his crew’s performance “showed that we have a very solid foundation for the spring season.”

In the collegiate 8+ event, the 1V finished 12th out of 38 crews with a time of 14:57.1. The men had a strong build and start through the Boston University Bridge that set them up with good rhythm through the powerhouse stretch. Coxswain and tri-captain Alison Robey ’20 skillfully steered the boat past Rutgers, on the inside of the Weeks turn with a tight line. Although the crew experienced some hiccups going into the final turn at Eliot Bridge, they were able to regain their composure for a strong finish. The men finished second among NESCAC crews, a mere .004 seconds behind Trinity.

Six-seat and tri-captain Jarrett Heflin ’20 said that the crew “raced a clean and consistent piece, demonstrating our technical progress this fall.” He also noted that he “could not be more proud of the boat.”

On Saturday, the men will finish their fall season at the Wormtown Chase on Lake Quinsigamond in Worcester, racing against NESCAC foes and other regular spring season competitors.