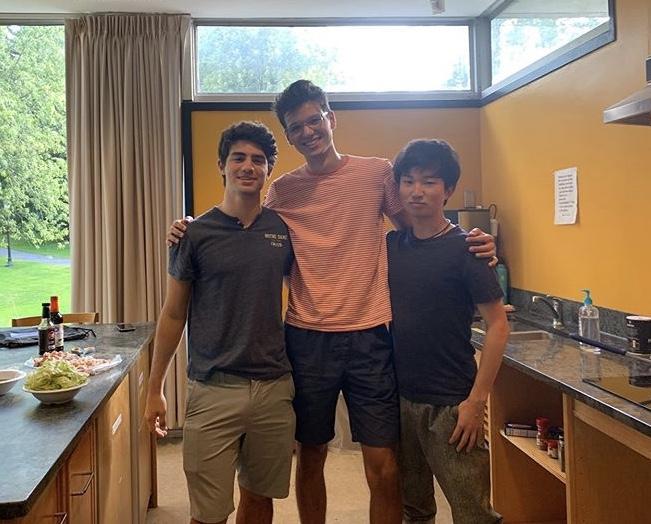 This fall, Gaston Aime ’23 and Matias Enriquez ’23 created a new club dedicated to chess boxing, a mash-up sport that is, according to Aime, at “the intersection of brain and brawn.”

Chess boxing, which was created in the early 2000s, but recently became more popular on college campuses, alternates between six rounds of chess and five of boxing. When Aime and Enriquez met over the summer on their way to campus, they knew the College was the perfect place to introduce this unique sport.

“The workload at Williams, it’s tough,” Aime said. “So, how do you get that maximum efficiency of mental work but also work[ing] out? This is the most efficient way to do both.”

Enriquez agreed, saying, “The beauty of it is combining intelligence with physical endurance and stamina.”

The juxtaposition of chess and boxing challenges players, who must tap into both physical and mental skill sets. “So, when you get hit in the head, it affects your ability to reason when you’re playing chess,” Enriquez said. “So, they’re not entirely independent. They train two different things but they also come together.”

The duo created a GroupMe chat for the club at the end of August, which immediately blew up with excited messages from their fellows members of the Class of 2023. They also started an Instagram account, @williamschessboxing. Aime and Enriquez are now working on becoming a registered student organization and finding a faculty advisor.

The club now has around 30 active members. “When we started, we had no idea what kind of reception we would get, given that we were just advertising chess boxing to people,” Enriquez said. “But it’s really blown up.”

The group is open to everyone, whether they are experienced in chess or boxing or have never tried either. The team is entirely student-run, with more experienced chess-players and boxers helping to teach newcomers.

Yuichi Fukunaga ’23 serves as the club’s “CFO,” or chief food officer. In preparation for the club’s interest meeting, he coordinated the cooking of homemade ramen for members to enjoy. Fukunaga also participates in the club’s training. “I was initially looking for any sports club where I would release all the stress from work and heard about chess boxing. I thought [this] would be a great opportunity to give [chess boxing] a try,” he said.

Only a handful of other American colleges have chess boxing clubs, including Penn State, UCLA, Dartmouth, and Washington University in St. Louis, but Aime and Enriquez are looking to further popularize the sport. “We’re trying to get some inter-school stuff going on,” Aime said. “That would be a lot of fun.”