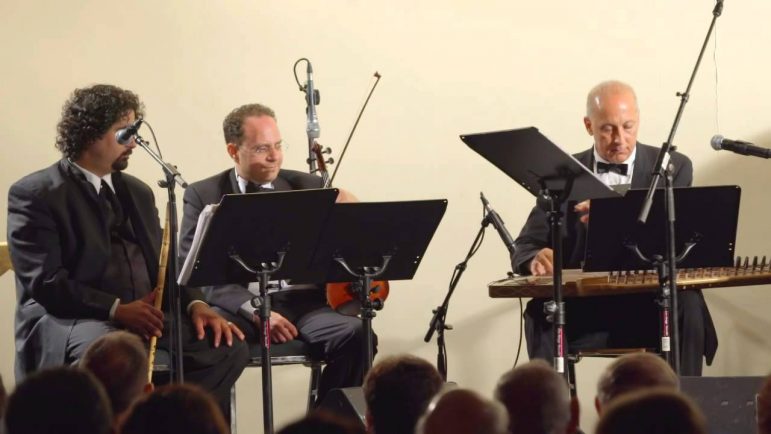 It took no more than a glance to realize that the National Arab Orchestra (NAO) bears little resemblance to the orchestras that usually draw crowds of locals to Brooks Rogers Recital Hall. On stage were two instruments that were instantly recognizable — the violin and upright bass — while several others were vaguely familiar, if unexpected in a “classical” setting. Unpacking the differences between the typical Western understanding of an orchestra and the Takht ensemble on stage was one of NAO Music Director Michael Ibrahim’s main goals for the NAO Takht ensemble concert Monday evening, which alternated between performance and lecture as the evening went on.

After an opening instrumental piece gave audience members a taste of the ensemble’s sound, Ibrahim introduced each member in turn, offering a brief explanation and history of their instrument and allowing them space to demonstrate its sonic qualities with a solo. The first was the riq, an instrument which looks essentially like a tambourine, and was referred to as such. Combined with the upright bass, the rhythm section didn’t require much explanation.

Ibrahim turned next to the oud, which is credited as an “Arab lute” on the concert program. Ibrahim traced the instrument’s evolution to the Western lute, acoustic guitar, steel guitar and finally electric guitar: “then, Jimi Hendrix was born, and the rest is history.”

Ibrahim next described the process of tuning the qanun, or “Arab harp,” simultaneously referencing the musical modes, or maqamat, that structure the notes and scales of Arab music. Ibrahim then turned to the violin, which he said replaced the kamanjah, a type of fiddle, around World War 1.

Ibrahim himself played the nay, an end-blown reed flute, a few examples of which he passed around for the entire audience to examine. He also displayed his vocal talent when demonstrating the difference between two maqamat, and again later on when dueting with orchestra vocalist Marian Layyousse.

One of the primary themes of Ibrahim’s historical lecture was the blend of Middle Eastern culture with that of the West, illustrated both in the similarities between the instruments of both traditions and in the musical pieces themselves. He paired a snippet from a Byzantine hymn with an Egyptian song from the 1970s; later, he introduced one of the final songs by advising the audience to listen for Western influences.

At times, Ibrahim’s teachings felt a touch particular, as when he distinguished between “Arab” and “Arabic,” but his intentions were good and his method effective. By and large, the performance served as a thoroughly informative introduction to a style unfamiliar to the majority of the audience. Ibrahim asked at one point for members of the audience who had prior experience with Arab music to raise their hands; one of them said they encountered it in Palestine, another in Iran and a third in Boston.

After 20 minutes or so of lecture, Ibrahim took up his nay and led the ensemble through several songs with much shorter breaks in between pieces. The playing was virtuosic across the board, but Ibrahim managed to stand out, justifying his long speeches with several incredible solos. At certain points, some of the other instruments dropped out, leaving the riq and bass to accompany the ney in a manner reminiscent of a jazz solo.

It was during those longer performances that the second main theme Ibrahim brought to the table emerged: the nature of the interactions between the musicians and their audience. Ibrahim urged listeners to signal their appreciation for solos by clapping or calling out a few phrases — “Allah,” “my eye,” and “my soul” — which was a big ask at first, though the audience chimed in more and more toward the end. All in all, the concert offered as much by way of educational value as artistry, though at points I was glad to stop thinking about these things and to just listen.