‘One Cut of the Dead’ screening horrifies Spring Street 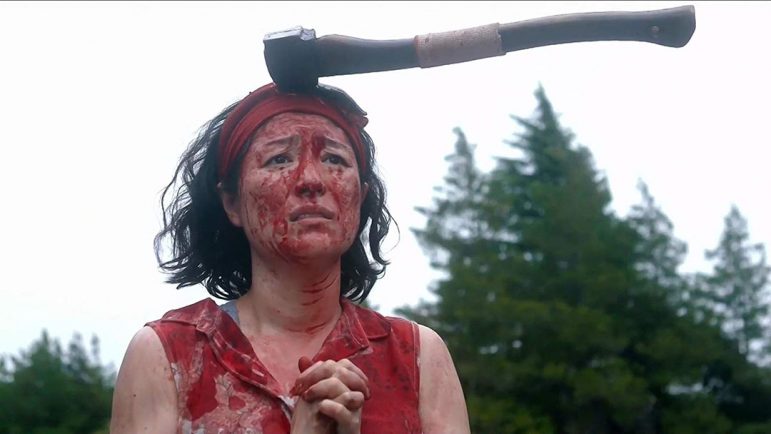 PHOTO COURTESY OF IMAGES One Cut of the Dead, a special screening hosted by Images, provides a meta-take on the horror genre by using tropes and cliches.

Last weekend, Images showed One Cut of the Dead, a 2017 Japanese horror film directed by Shin’ichirô Ueda for two nights. I decided to catch the Saturday night showing at 11:30 p.m., knowing I wouldn’t be missing out on the lackluster going out scene that I experience almost every weekend night. I thought it would be a relaxing break from the stress of finding a decent party. I was tragically wrong. This film, although lacking grandiose cinematography or special effects, was a mind warp, proving to be the ultimate meta horror film, flipping the narrative, zombie tropes and the entire genre of horror on its head.

One Cut of the Dead is one of those low-budget films (it cost around $27,000 to make) that is so singular in its approach that it overcomes its lack of well-known cast members and elaborate production. The film centers around the making of a zombie film at an abandoned WWII Japanese facility. It’s filmed in a documentary style constantly devoid of a tripod, often giving way to shaky camera movements, including its dropping at multiple points.

The film begins with a scene showing the multiple failed takes of the main actress, the victim and actor, a zombie. The zombie film’s director is showing screaming at the two, implying his instability, lack of control over his cast, and failures to organize the entire project. In this moment, the hysterically cheesy acting on part of the actors on the zombie film set is immediately spliced with the frightfully angered nature of the zombie film director, creating a duality between comedy and horror that persists through duration of the film.

After multiple failed takes of the aforementioned scene, the director leaves to blow off steam. Upon his exit, the two actors and the makeup artist discuss his antics. The makeup artist accidentally reveals a secret to the actors – the location they are shooting at is rumored to have birthed actual zombies after a failed experiment took place there. The three hear a mysterious noise outside the WWII-era facility, which is then, of course, followed by anxious fits and an eerie silence among the three. Then, all hell breaks loose as a zombie attacks a crew member outside the facility, his remnant limb being thrown into the building.

Following copious decapitations, zombie kills, severed limbs, cliché exaggerated Zollie shoots and prolonged chase sequences, the film reaches a presumed end at the 45-minute mark. As a viewer, I felt content and amused. One Cut of the Dead seemed like a succinct and well-packaged comedy take on the zombie horror genre, sprinkled with documentary filmmaking tropes and clever dialogue.

Then that whole notion, my whole experiential reaction unraveled itself. As the lone survivor, who was the main actress in the zombie film production, stands on a star of blood atop the roof of the facility, the camera zooms out in a seeming end, but then a television broadcast filter fills the screen. We then learn that this was a live broadcast of sorts.

From there, the film works backward, establishing the previous context of the making of the theatrical live broadcast of the zombie attack that took place on the zombie film production set. We learn that it is all part of an elaborate series of layers, a Russian doll of sorts, with intricate layers placed inside each other. It’s the ultimate meta representation of the horror film, particularly the zombie one. As soon as I learned about this extra dimension, my brain seeped over with realizations of what I had previously watched, clarifications of past confusions and certainly new questions.

Lucky for me, the film repeats itself after the establishing scenes of casting, roundtable readings and general pre-production events. This time, the scenes from the first half become more clearly stated, making sense of the drawn-out breaks in dialogue, awkward gestures and, most importantly, showing how the gore is depicted. During the first half, I had thought the splattering blood scenes and lack of explicit showing of said violence was due to budgetary constraints, but after learning about the extra television production veneer, the gestures behind the production of each scene was shown.

In the second half, there is just as much chaos, albeit without the same ramifications. The problems are limited to casting, improvising on the go, and other such production tasks, which is notably less weighty than the deaths that were inflicted in the first half. After the television broadcast crew administers a successful episode of a film of the filming of a zombie movie, the cast and crew celebrate their accomplishments, the mending of family gaps and the wholesome growth of character arcs.

Of course, after the film’s credits roll along the screen, additional footage is shown that adds yet another layer, this time with a fish-eye lens quality, like that of a GoPro. Once again, I asked myself, “Wait, is that it?” This time it was, saving my mind from further exhaustion.

One Cut of the Dead was one of many special screenings Images has planned for this fall in addition to their typical weekly or bi-weekly showings. Stay peeled for one-off or weekend only showings of less accessible or heard of films like One Cut of the Dead.