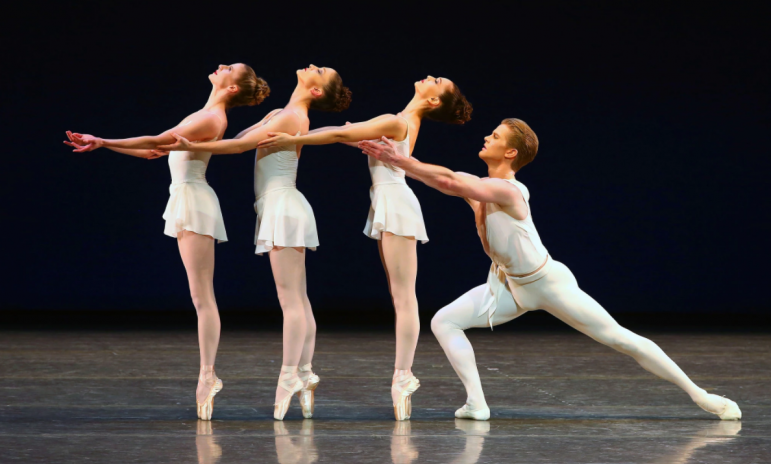 This past week, the College dance department was fortunate enough to play host to a group from the New York City Ballet (NYCB).

The renowned New York-based company visits the College every few years, as part of a partnership developed by Bob Lipp ’60, who serves as the vice chairman of the board of directors of NYCB. He and his wife Martha visited campus along with ten of the company’s dancers for a master class, dinner, performance and post-performance celebration.

The visit began on Thursday afternoon, when principal dancer Jared Angle and soloist Georgina Pazcoguin offered a master class for College dancers and community members in the dance studio of the ’62 Center for Theatre and Dance. The master class was an opportunity for dance students not only to learn from two incredibly talented professionals but also to gain exposure to a unique subdivision of ballet technique.

Though many outside of the dance world do not realize this, the genre of ballet can be further broken down into quite a few specific techniques. NYCB is the nexus of the Balanchine style of ballet, a technique created by the company’s founder, George Balanchine. Balanchine’s choreography is characterized by strong, sharp movements, precise linearity and some of the fastest petit allegro (small jump) sequences seen in ballet.

Angle and Pazcoguin shared with the Williams dancers some of the most important components they have learned for implementing such a technique. “No matter what movement you’re doing, it’s all about finding the fifth or the first [positions],” Pazcoguin said during Thursday’s class. “You have to stay really strong in that and keep centering yourself there.” Such commentary was supported by the barre and center work given — fairly straightforward yet demanding exercises which emphasized swift shifting of weight and delicate patterns of musicality.

At the company’s Friday night performance it was easy to see the payoff of the particular style these dancers train in. Whether or not one is a fan of the style, it is impossible to deny that Balanchine dancers bring something special to the stage. The combination of stability and speed, agility and grace, these artists are taught allows them to arrive at any given position quicker than most others while somehow never seeming to land or stand still. The showcase, titled “A Legacy Through the Repertory,” was curated by Angle, an evening of ballet that transported the audience from the contemporary world of ballet back in time to the days of Balanchine himself.

The first work was a duet choreographed by Lauren Lovette, a young artist who doubles as choreographer and principal dancer with the company. Lovette’s piece, titled Falling Forward, was decidedly contemporary, danced in socks rather than the expected pointe shoes and ballet slippers by Eliza Blutt and Andrew Veyette. This was followed by another work from a contemporary choreographer — Justin Peck’s Chutes and Ladders, an exceptional take on the classical pas de deux, performed by Sara Adams and Andrei Chagas — and then a hop backwards in time to the pas de deux from Jerome Robbins’ Moves. The Robbins work, an intensely physical piece performed in silence by Claire Kretzschmar and Andrew Veyette, was the first work of the evening created by a choreographer no longer living. In the Q&A session following the show, the dancers discussed the inherent difficulties and pressures that come with performing in works such as this one, which demands so much, and for which no creator is present to decide whether what any individual dancer does is “OK.” These same concerns became only more present in the final work performed: an archival version of George Balanchine’s Apollo.

At the small dinner with students on Thursday night, Angle and Pezcoguin explained the unique nature of the version of Apollo they would be presenting in Friday’s performance. For decades, NYCB has performed a slightly abridged version of the ballet, one which skips over the god’s birth at the beginning and is concluded before those early figures from Apollo’slife return to the stage.

According to the dancers, Balanchine himself removed those scenes over the course of the ballet’s run, as part of his trajectory away from more traditional “story ballets.” Yet, for this particular performance, Angle decided to bring back those scenes. A geometric staircase was constructed in the ’62 Center’s scene shop, and it was on this structure that Leto danced the birth of her son, that the cast ascended before the curtain fell. The archival additions, flanking the historically performed middle of the ballet, really rounded out the narrative life of the renowned work.

On the whole, the evening’s performances, and the visit in its entirety, was a powerful lesson in the ways ballet can change so much over time yet still remain timeless. Regardless of whether — to use Chagas’ wording from the Q&A — a dancer is in a more historical role, for which “the shoe they are trying to fit in can be hard because it was created for other bodies,” or a newly created part, about which they can say, “This shoe was made for me,” the magic of the art form is ever-present, moving through and taking to heart the long legacy from which it has emerged.