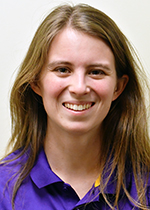 How did you get into coxing?

My brother was a rower at the same school and I’m a big fan of him. So I wanted to be a rower, but I was like 80 pounds and four feet tall so they suggested that I try coxing and I liked that a lot and I never really got that much bigger so I just stuck with that.

Why did you join the men’s team?

I switched over originally [in high school] just because of the number of coxswains that were on each team and I had some closer friends on the guy’s team. The way that [my] high school team worked, I definitely liked the coaching better on the men’s side. It just worked better with me. The dynamic between me and the rowers on the men’s side is just a little different than on the women’s team, and I personally liked it better that way. It’s definitely different for different people.

What is something about coxing that most people don’t know about?

I mean the easiest one is that most people think that coxswains just steer, or just steer and say “row” on repeat, but we do all the strategy in the boat. Most of the time, [for] experienced coxswains, the coach will tell us what they want practice to look like and we’ll run it while they run next to us and give advice and such. We have a more involved role than some people think, so it’s definitely a very multi-faceted role.

How do you train as a coxswain?

We’re allowed to do some of the physical training if we want to, but it’s not a necessity of the sport for us. There’s not a lot of coxswain training available. That’s kind of a thing in the sport right now. We definitely have trouble training some coxswains when they’re coming in fresh. It’s hard to teach new coxswains all the skills all at once, especially when you have experienced rowers in the boat, who sort of know what you’re supposed to be doing. In high school, my training was a lot of listening to other coxswains [and] listening to recordings. They would have us ride in the launch sometimes to follow the other coxswains around and get feedback from the rowers [about] what works for them and what’s annoying.

What’s the hardest thing about coxing?

Multitasking. It’s a lot of multitasking. I think it’s very easy to get sucked up into the talking part of it, because that’s what people notice the most, but the steering is the most important part. It’s not an easy thing to do and it takes a long time to learn. Being able to balance those appropriately when you’re in the boat is definitely the tricky part.

Have your skills in coxing been applicable in other parts of your life?

What has your experience been as a female captain of a men’s team?

Honestly, less weird than people always expect. This is now my sixth year on a men’s team, so it doesn’t really feel that out of character [since] I was already doing the thing where I told them what to do. So it’s for sure more of that, and it’s definitely a little different working with co-captains who are both guys, but I think it’s been good on the whole. We have a completely democratic captain choosing processes so it was something the team wanted, which is really cool for me. I think it hasn’t been that different from a general captain experience, it’s just been a lot of building off the same stuff of what a coxswain does.

What’s the weirdest thing you’ve seen on a boat?

We’ve got this is kind of a running thing in crew. A lot of times, we’re on the water 40 minutes before a race happens and guys usually have to pee right before a race happens. I don’t usually see that, but I’ve witnessed men peeing in a lot of different items in boats.

Wait, so they don’t pee off the boat?

They pee off [the boat] if they’re allowed to. But there are some rules where you can’t do that, because they don’t want guys just peeing off boats everywhere. It’s legitimate. So, they pee in a water bottle or something. The worst I’ve seen is a Sun Chips bag. That was in high school. [I’m] still not sure how that happened or how that worked. That was my first race in a men’s boat, actually. One of the guys had brought Sun Chips out to snack on, which was weird in the first place, and then we were getting to the line and a guy was like, “Can I use your Sun Chips bag?”

What’s the weirdest thing you’ve had to do as a coxswain?

One of the traditions of coxing is that if [the rowers] win a race, they get to throw you into the river, which is fun. We only do it for championships in college, so it hasn’t happened recently, but it happened to me a lot in high school.

Are there other team traditions?

There’s a lot of crew lore that we follow. Like all the boats have this bow ball on it, so if you bump into something it doesn’t break, and you’re not supposed to wash that when you’re cleaning the boat for good luck. That’s a full team sport thing. And then in collegiate rowing, at the end of a race, you give all your shirts to the person who wins, so you always have a bunch of betting shirts floating around.

What are your goals for your last year on the team?

We’ve had our current coach for three years now, and before that I ran through, I think, five coaches my freshman year here, which was a lot of complicated stuff. But the team definitely was kind of in a rough patch when I came in because we were having a hard time recruiting people and, with that kind of mix-up, we were los ing a lot of people from year to year. [But] we’re finally getting to the point where we have classes [which] pretty much no one leaves from year to year that are really committed to doing well in the sport. We [also] have good freshmen coming in, so this is our fastest year in a while, I think. The [Head of the Charles] race records have definitely shown that. We’re definitely hoping to pick up on that as the spring comes. We had kind of an on-and-off season last year, where we did better than we had previously but we definitely could have been more consistent with it. I think we have the strength to go through with that now, so that’s definitely hope going forward.

What will you miss most about being on the crew team here?

I’ll just miss being on a team in general. We have a really big team, so you get a lot of friends and people you know around campus on it. I think we’ve had a team culture that’s just been getting better and better while I’ve been here, so I’m excited to see how that keeps growing when I leave. I’m definitely gonna miss being a part of it.