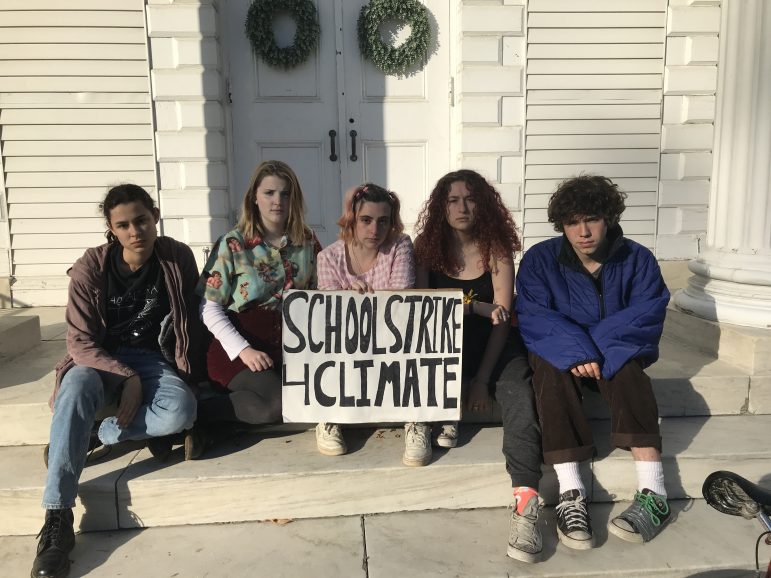 On Sept. 20, 2019, over 60,000 people marched in New York City as part of a worldwide climate activism campaign. On Oct. 4, 2019, five people went on strike for the same cause in Williamstown, as they did the week before, and the week before that.

Ruby Lerman, a freshman at Buxton High School in Williamstown, has led a demonstration for climate justice every Friday afternoon for the past 11 weeks. Sometimes accompanied by her friends and peers, she sits outside of the First Congregational Church on Route 2 with a sign that reads “School Strike 4 Climate.”

Lerman is from New York City and has worked in coordination with Fridays for Future, a climate action movement based in the city and founded by Swedish climate activists such as Greta Thunberg. Lerman has met and discussed activism with Thunberg, an interaction that has continued to inspire Lerman.

After moving to Williamstown to board at Buxton, however, Lerman encountered challenges trying to strike in a rural community that stood in sharp contrast to the hub of activists that surrounded her in her previous community. On a weekly basis, the New York strikes would be attended by about 1000 people. Here in Williamstown, there’s usually a turnout of between two and five people.

On a smaller scale and in a more isolated environment, Lerman finds activism to be a daunting task.

“When I’m in New York striking, I’m part of a movement,” she said. “Sometimes I sit here by myself and wonder, ‘How is this working? ‘Is this doing anything?’”

This hasn’t, however, deterred Lerman and her peers, who see their activism as a growing movement. “I was originally planning on stopping striking, but I realized that this is a really good opportunity to get more kids involved with the climate movement because youth are the forefront of this issue,” she said. Lerman has reached out to students from Mount Greylock High School, the College and the local community, and also helped organize the climate strike that took place on campus on Sept. 20.

The primary goal for Lerman and her friends is to make their message as visible as possible, even within an insular community such as Williamstown. “I just want to be here to help inform people and shove it in peoples’ faces a little bit that we need to do something right here, right now,” said Carly Anselmo, another climate striker.

Those who demonstrate with Lerman all have different motivations for doing so. Devin Khoury, one of Lerman’s friends, was inspired by her to learn more about climate issues. “I’m here to support my friend in her really inspiring journey,” Khoury said. “It’s really cool to see someone so young really active in trying to support the future of this earth.”

For others, Lerman’s work has made activism feel less daunting. “I have always thought that this was some big unsolvable issue, but I saw Ruby doing all this work, and I don’t want to sit idly by and watch as other people do the work for me,” said Eliza Goldsteen, another of Lerman’s peers. “I want to stand up and help try and make change.”

Overall, Lerman and the other students said they want to reject the perception that they themselves are the actors behind important climate work. Instead, they said they want to sound the alarm bells to the adults in power who aren’t paying attention to the science. “People are not pulling their weight,” Lerman said. “I’m not here to energize people and make them feel good. I’m here to say that your generation has failed us time and time again, and we’re not standing for it.”

The activists are concerned about the climate crisis on a national level, but also said they understand that climate change has already affected  the local community. One example they cited was Hurricane Irene in 2011, which displaced approximately 300 residents from the local Spruces mobile home park. “It’s interesting to think that we have climate refugees right here in Williamstown,” Lerman said.

She hopes to use the progressive energy already present in Williamstown and raise it to a statewide level, aiming to eventually improve Massachusetts environmental policy.

Overall, this group of students is passionate about a wide variety of causes. Some also advocate for stricter gun control laws or saving the bees. Despite being busy high school students, they find time for advocacy work and activism on a weekly basis, not only because they care about the cause at hand, but because they find it rewarding. “It’s also really empowering to be here and to know that my actions are making change in a way that they’ve never done before,” Lerman said.