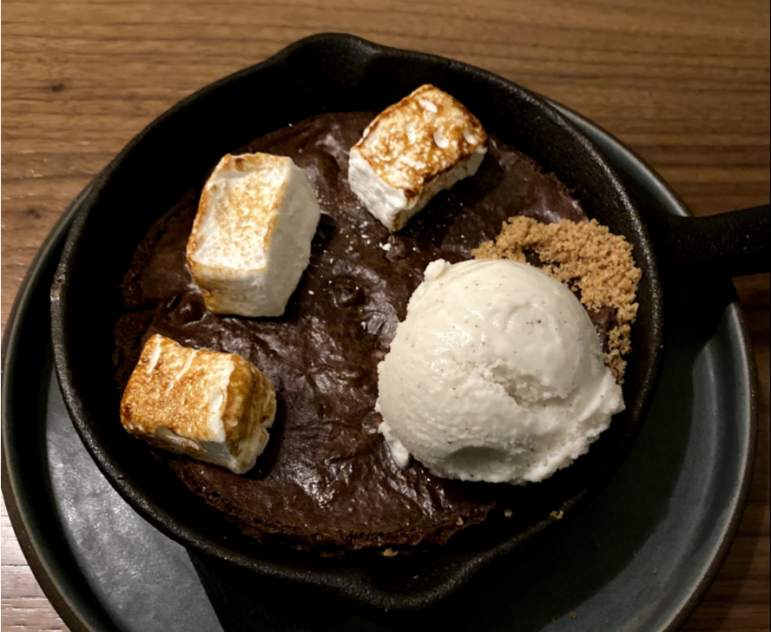 The s’mores brownie skillet was one of many excellent dishes at The Barn, the Williams Inn’s restaurant. (David Shakirov/The Williams Record).

We were seated in a bright and minimalist private dining room that connects with the otherwise dark and bucolic bar and main dining area. Our appetizers included the wild mushroom toast ($12), fried calamari ($15) and grass-fed meatballs ($13). The mushroom toast was served on sourdough bread, which contrasted the milky, mild ricotta and, according to Moazeni, “melted in [his] mouth.” The meatballs, served in a red sauce with grilled bread and ricotta from Maple Brook Farm in Bennington, Vermont, beat my and Coleston’s high New Jersey standards for tomato sauce. The fried calamari, although good, was nothing to write home about. And, on a more critical note, from sit down to appetizer, the wait was almost one hour. Another nick — the bread, while surprisingly great, was strangely not served before our meal. But, all in all, the appetizers beat expectations and fit the mold of the Berkshire’s high-end dining scene, dominated by the likes of Williamstown’s Mezze and North Adams’s Public Eat + Drink.

The wait for entrees, another half hour, brought us a filet mignon ($32), the Barn Burger ($16) and the crispy skin chicken ($24). The filet, a dish hard to botch, came out as expected with a massive side of plain arugula salad (that is, no dressing, no seasoning, just leaves). Our guess was that the leafy greens’ purpose was superficial — meant to take up the plate’s real estate next to the small eight-ounce filet. This arugula was disappointing — a cheapening afterthought that could have been a stellar salad, a stunning grilled broccolini or something else. Pass.

The burger, however, topped with yellow tomatoes and local cheddar on a brioche bun was a clean and well-received meal, especially for its comparatively low price. The chicken was bone-in, fried and served on a polenta with kale. Never a staunch supporter of fried chicken, I ventured on and was blown away. High risk, high reward? With the batter perfectly seasoned and fried until crisp, the chicken managed to maintain a moist interior — a rarity in the kitchens of Williams dining halls. The polenta, otherwise bland, had the rare balance of salt and flavor and came out with no lumps. The kale, presumably sautéed in garlic and oil, was stellar.

The dessert and cheese menu (the latter being a favorite of Kletscher’s), was a wholesome touch to a great meal. The s’mores brownie skillet ($11), bourbon crème brûlée ($8) and locally sourced lemon and ricotta cheesecake ($9) were standouts.

The new Williams Inn is undoubtedly a welcome addition to the Purple Valley, with overall amazing food, minus a few small errors and an unjustifiably long wait-time.  Don’t expect it to come cheap, though (our bill for six was over $200).

“In terms of cost per unit, it’s up there. I’d rather spend $7 at Ramunto’s, though,” Spiezio remarked.

Neelaveni, however, summed it up well:  “after all is said and done, I think the reason I had so much fun is because of the people I was eating with.” Take his advice and grab a friend to taste the food at the new Inn at the end of Spring street — it’s likely here to stay.