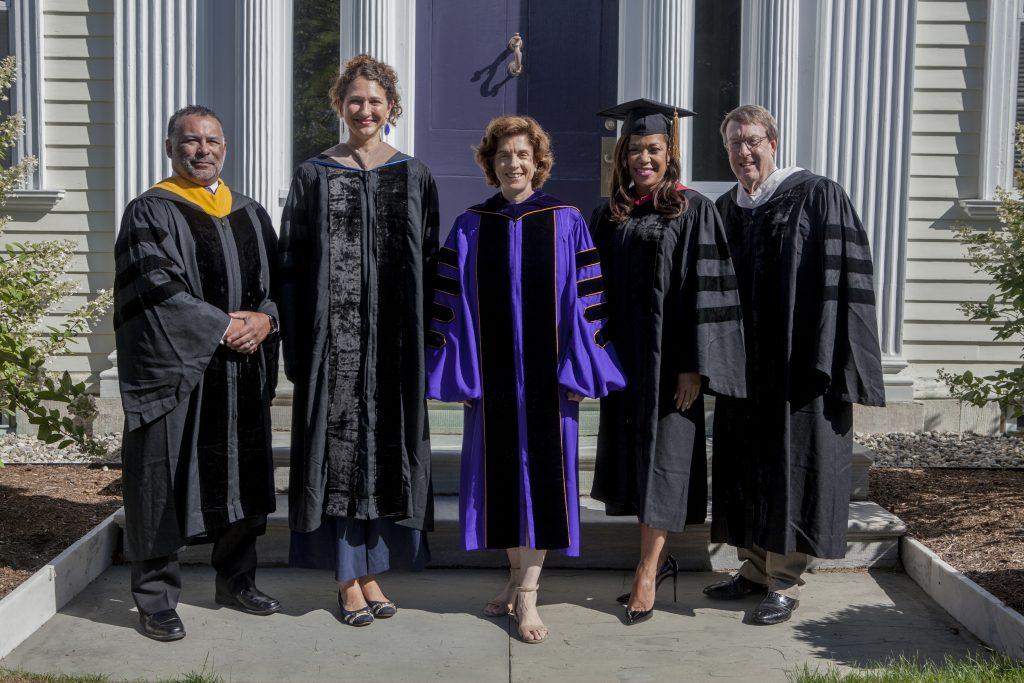 Last Saturday, the College marked the start of the 2018-2019 academic year with the annual convocation ceremony in Chapin Hall, which included the awarding of this year’s Bicentennial Medals. Four alums received the medals, given each year since 1993 for “significant achievement in any field of endeavor.”
The 2018 recipients of the Bicentennial Medals were John Walcott ’71, Cheryl Robinson Joyner ’85, Michael Wynn ’93 and Shoshana Clark Stewart ’02. These alums come from a variety of fields of work and experiences, which Director of Alumni Relations Brooks Foehl ’88 explained was precisely the point. The awards are meant to be a “celebration of the breadth and depth of achievements within the alumni body,” he said.

The first recipient, John Walcott, is a journalist with over 40 years of experience at The Wall Street Journal, Newsweek, Bloomberg and other publications. He is currently the editor-in-chief for national security and foreign affairs at Thomson Reuters Corporation, a mass media and information firm. He served as the Washington bureau chief of the media company Knight Ridder, where he published many stories investigating the verity of claims that Iraq had weapons of mass destruction. Additionally, Walcott co-authored the book Best Laid Plans: The Inside Story of America’s War Against Terrorism. His experience was also the subject of Rob Reiner’s 2017 movie, Shock and Awe.

At a time when political leaders were waging war in the Middle East, Walcott sought to gain what College President Maud Mandel called “a grasp of the wider picture.” His doubts about the accuracy of political claims led him to go against the grain, investigating further to get to the truth. “History has since proven that you were right,” Mandel said to Walcott at Saturday’s ceremony.

Joyner then received her award for her achievements in the entertainment industry, as an executive responsible for some of music’s most influential global marketing campaigns in recent decades. Joyner has worked at Sony, MCA, Warner Bros. Records and the Universal Music Group, and has crafted marketing campaigns for artists such as Prince, Fleetwood Mac, Madonna and Stevie Wonder. She was also the recipient of two professional Grammy Awards in 2005 and 2015 for her support of the Recording Academy’s education and advocacy work. Most recently, Joyner founded and now serves as chairman of PARA Music Group, which licenses music globally.

Joyner also gave this year’s Convocation address. She urged the senior class to recognize the strength in the College community as they embark on their final year. She told the audience of how, at times, it was difficult for her to find her place at the College in the early 1980s, shortly after the school had started accepting women. “I felt like a fish out of water who had landed in the Purple Valley,” she said of arriving on campus as a 16-year-old first-year.

Joyner said that this experience prepared her well for a career in a male-dominated industry, as she learned to stand for herself and value those who stood for her. She encouraged students to seek out others and bond over shared interests and ambitions. “Elevate, empower and inspire others,” she said.

The third recipient of the medal was Wynn, the Pittsfield Police Department chief of police. Wynn served as acting chief of police for ten years, before being officially sworn in as chief last year. Over that time, he has worked to connect the police department to the broader Pittsfield community and to diversify the force. He is also the author of the 2008 book, Rising Through the Ranks: Leadership Tools and Techniques for Law Enforcement. Mandel praised the work of Wynn, who started as a Campus Safety and Security officer while a student at the College. “Respect has been a hallmark of your career,” she said.

The fourth medalist was Shoshana Clark Stewart, CEO of the Turquoise Mountain Foundation. The foundation was created in 2006 by HRH Prince Charles of Wales to help revitalize and preserve historic regions in Afghanistan, Saudi Arabia and Myanmar. Under Stewart’s leadership, the foundation has become a new type of non-governmental organization: one that sponsors economic growth by supporting local artists and by training over 6,000 people to create economically lucrative and traditional goods. Stewart has also overseen the building of community health clinics and a school for 200 students. In her address, Mandel noted that this was a particularly astonishing feat in an area not used to seeing women in positions of power.

The selection process for medalists is meant to solicit a diversity of careers. Foehl explained that each year, the alumni relations committee works with the executive committee of the Society of Alumni to compile a list of alumni doing groundbreaking work in their field. Recommendations come through the office itself, but also from outside nominations. The president of the College, or in this year’s case, former Interim President Tiku Majumder, then selects anywhere between four and seven recipients.

This year’s convocation ceremony also included a procession of the Class of 2019, clad in their graduation caps and gowns, and an address from Mandel. Mandel spoke about the work of understanding historical legacy and how, as the senior class begins to plan for life after Williams, they will have a role in creating a new legacy.
The ceremony also included a musical performance by Angela Chan ’19 and a recognition of the 28 members of the Class of 2019 inducted into Phi Beta Kappa by Dean of the College Marlene Sandstrom. The Grosvenor Cup Award for integrity, dedication and service to the Williams community was awarded to Alia Richardson ’19. College Council Co-Presidents, Lizzy Hibbard ’19 and Moisés Roman Mendoza ’19 spoke on behalf of the senior class, acknowledging the college’s own legacy. “Williams has a complicated history, and its paradoxes and contradictions exist to this day,” Hibbard said. “The irony of a Williams education, though, is that instead of making us blind to those problems, it allows us to begin to understand them.”