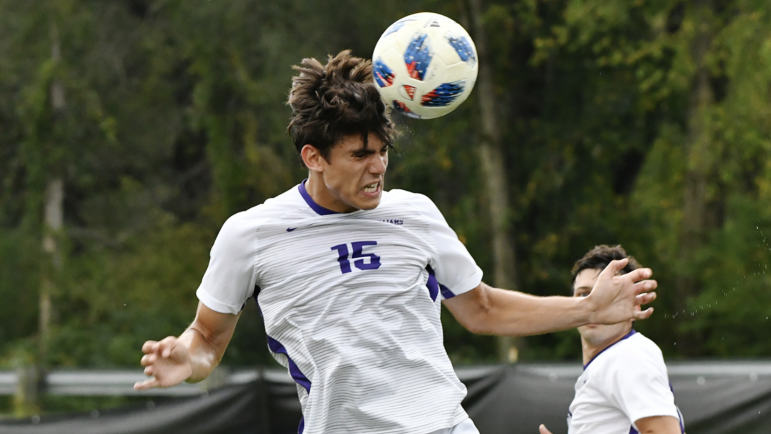 Defender Andrew Mathew ’20 scored the only goal in the second half for the Ephs against the Thoroughbreds. Photo courtesy of Sports Information.

Defender Andrew Mathew ’20 scored the only goal in the second half for the Ephs against the Thoroughbreds. Photo courtesy of Sports Information.

The game on Saturday started with high intensity as both teams attacked the ball aggressively and quickly moved the ball up and down the pitch. The Ephs’ first opportunity came in just the 3rd minute when Nathan Song ’22 found himself at the end of a header from Demian Gass ’20. He ran up and fired a volley towards goal off his right foot, but scuffed the ball wide. The Mules’ first threatening chance came in the 11th minute, when they won a corner. Ryan Seaman took the corner and sent in an in-swinging ball to Jack Fletcher, who attempted to drill the ball on the ground into goal. The ball flew on target towards goal, forcing Eph keeper Michael Davis ’23 to move off his line and elevate to keep the game scoreless.

At the 18th minute, the deadlock was broken, as the Ephs were able to put one in the back of the net. Will Felitto ’22 took a long throw-in from the left side of the pitch into the box. Jamie Holland ’22 surveyed the ball, got under it and scored. Mule keeper Stanley Clarke saw the ball, but had little time to react. Clarke moved towards the ball and got a touch on it, but the ball still rolled into his goal.

After this goal, the Ephs seemed to gain more control over the game, but, as the first half progressed, the Mules recuperated and started fighting harder for the ball. Toward the end of the first half, they put pressure on the Ephs and were able to create menacing chances. However, the  Eph defense kept the ball away from the net till the half. In the first 45 minutes, Williams had recorded 6 shots and Colby had recorded 4, and keepers Davis and Clarke had each made three saves.

The second half started with both teams struggling to get the ball into the attacking third. Both teams’ defenses were strong and did not allow the ball past their back line. As the half progressed, Williams seemed to gain some traction and pushed up the field. They were able to get a few long shots off, but were ultimately unable to challenge the Mules goalie. As the half began to wind down, the Ephs lifted their foot from the pedal a little and played more conservatively in an effort to see the game out.

In the 86th minute, the Mules were able to put a ball into the box as Ethan Fabricant headed the ball into goal to equalize and secure a ticket to overtime.

Both overtime periods saw little developed attack, and play was centered in the middle of the pitch with possession changing frequently. A couple of promising chances came for both teams in the second period, but neither team was able to capitalize. The game ultimately ended in a 1-1 draw between the Ephs and Mules.

Eph head coach Erin Sullivan explained, “We played hard and earned a leg up in the first half but did not play with the level of intelligence and savvy we need to see a game like that out.”

By the end of overtime, the Ephs totaled 14 shots and the Mules totaled 9. Eph keeper Davis had made 5 saves in the game. The Ephs, with 21 fouls,  played an aggressive game compared to the Mules, who only had 9.

“Promising start but very disappointing result for our club. Hopefully we can start implementing the actual in-game adjustments needed to win matches like this,” Sullivan said.

The men will play their next game against Westfield State next Tuesday.