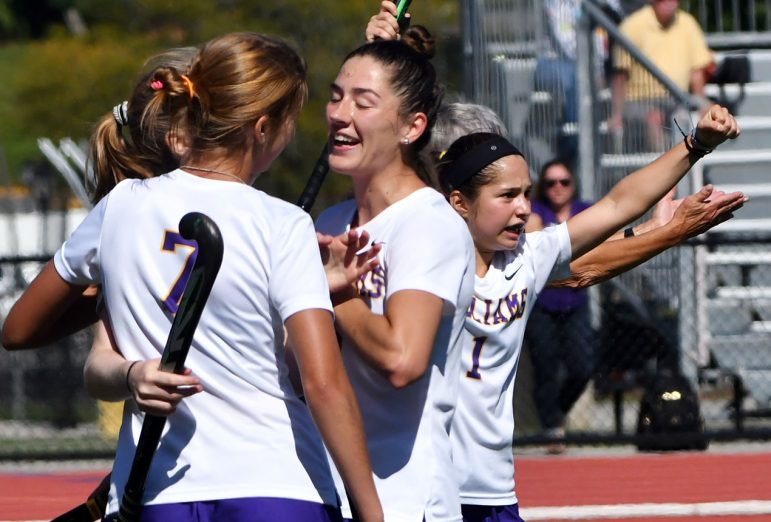 The women are currently second in the NESCAC standings, behind undefeated Middlebury. Photo courtesy of Sports Information.

The women are currently second in the NESCAC standings, behind undefeated Middlebury. Photo courtesy of Sports Information.

The Ephs took control early, pushing two penalty corners in the first three minutes on Saturday. Emily Batchelor ’23 took the first shot of the game, but shot just wide of the net at 3:01. A minute later, she took another shot that was knocked away by Mules keeper Emily Buckman.

The Ephs had another early scoring opportunity with a penalty corner at 9:45. Batchelor made the pass to Emma Ticknor ’20 at the top of the circle, who fired the ball at the net but was blocked by Buckman.

In the second quarter, the Eph offense put the pressure on the Mules, notching a penalty corner at 15:38. The pass from Catharine Torres ’23 reached Shea van den Broek ’23 at  the edge of the circle. She fired a shot, which Buckman was able to block in the knick of time. Claire Fitzpatrick ’21 collected the rebound and fired her own shot at the net, but was also turned away by Buckman.

Two back-to-back penalty corners proved to be exactly what the Ephs needed to get a goal on the scoreboard. At 21:16, Torres sent the ball into the circle and, in the midst of the scramble, earned the Ephs another penalty corner. Torres once again took the corner, passing the ball into the circle and running close to the goal where she gained possession of the ball. Torres shot it to the back of the net, putting the Ephs up 1-0.

The Eph offense kept the momentum going with another penalty corner at 24:29. After the initial pass, van den Broek found herself with the ball and made a quick shot through the legs of Buckman to bring the Eph lead to 2-0. The Mules threatened with two penalty corners of their own, producing a shot from Georgia Cassidy that was knocked aside by Eph goalkeeper Abby Lloyd ’20.

Going into the third quarter, the Mules kept their possession going, gaining a quick penalty corner. At 33:39, Cassidy hit a shot towards the goal, but was again blocked by Lloyd.

The Ephs regained possession and brought the ball down the field, where a scramble for possession in the circle awarded the Ephs a penalty stroke. Allie Weiner ’21 took the penalty stroke, sailing the ball over the shoulder of Buckman to push the Ephs up 3-0 at 37:50.

At the start of the final quarter, Ticknor fired a shot, but was stopped by Buckman. Another set of back-to-back penalty corners paid off for the Ephs, as van den Broek took a pass from Torres and found the back of the net in the game’s 53rd minute, extending the Eph lead to 4.

The women will take on Bates at home on Saturday, Oct. 19 at  noon.