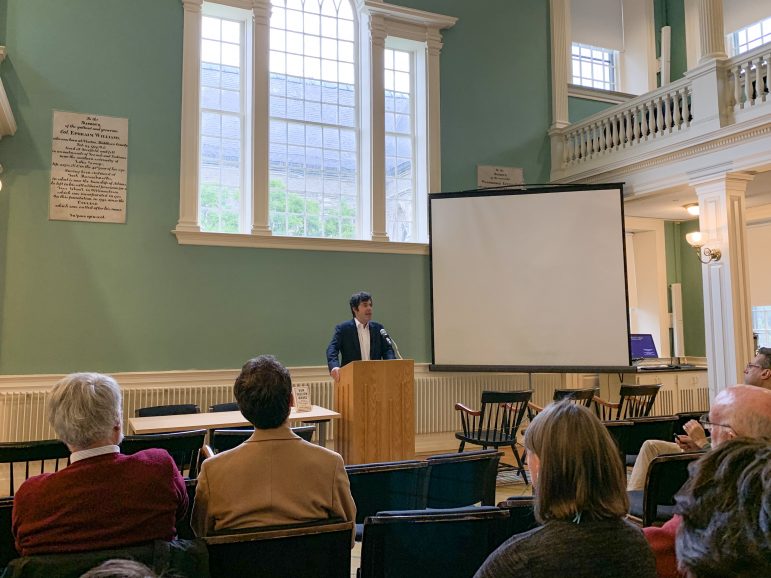 Jason Stanley, a professor of philosophy at Yale University, visited the College on Thursday to discuss his newest book, How Fascism Works: The Politics of Us and Them. Throughout his presentation in Griffin 3, hosted by Phi Beta Kappa, the philosophy department and the W. Ford Schumann ’50 Program in Democratic Studies, he explored the common traits of fascistic societies and emphasized America’s role in promoting fascism.

“My goal today, and my goal in my book, is to make fascism less mysterious,” he said. “We think, because it’s an Italian word, it sounds like it’s a European innovation, but fascists, particularly National Socialists, looked to the United States as a model.” Stanley returned consistently to the theme that fascism, far from being foreign, is endemic to many strains of American history and American values. In Mein Kampf, Hitler envisioned the segregationist United States as a model for his Germany, and his plans to institute plantation-style agricultural camps in the Ukraine was based on the hierarchies of the antebellum South. “The Nuremburg Laws were based upon our anti-miscegenation laws,” he said. “Except our miscegenation laws, with the one drop rule, were considered far too extreme.”

Much of the modern misunderstanding of fascism, Stanley argued, is based on a misconception of its root causes. He claimed that viewing fascism as simply authoritarian, akin to Stalinism or other totalitarian ideologies, does not fully capture its danger or appeal. Nor can fascism be understood in entirely economic terms – Italian fascists took centralized control of business, whereas German Nazis did not interfere as much in economic policy. Instead, Stanley advanced a notion of fascism that rests on ten pillars: the mythic past, propaganda, anti-intellectualism, unreality, hierarchy, victimhood, law and order, sexual anxiety, anti-urbanism and a belief that, “work will make you free.”

Stanley first explored fascism’s obsession with “the mythic past” – a fantastical representation of the nation’s history that encourages fascistic attitudes. “They always harken back to an empire, a military empire,” he said of this mythology. “A time at which the nation was pure, there was one ruling group, one ethnic group.” For Italians, this historical period of supremacy was Ancient Rome; for Germans, it was the Holy Roman Empire.

However, this mythology is also dependent on a historical humiliation. “Invaders came, liberals told us to accept the invaders and open the gates, and the country’s greatness was dimmed by the acceptance of these invaders,” Stanley concluded. In Germany, the Treaty of Versailles exemplified this humiliation, and for the ruling Bharatiya Janata Party in India, which Stanley described as proto-fascist, humiliation arose from Muslim rule of India hundreds of years ago.

This humiliation, Stanley said, necessitates the coercion or expulsion of those deemed responsible – always an out-group against which one can galvanize xenophobic fervor – tying into Stanley’s second theme: propaganda. His book emphasizes the 1990s in America, when an anti-crime propaganda campaign targeted Black Americans despite the fact that crime had been falling since 1991. He also argued that accusing the opposition of corruption is inherent to fascist rhetoric. “Every fascist campaign in history is an anti-corruption campaign,” he said, contrasting that with the fact that many fascist nations were infamously corrupt. “Whatever you’re guilty of, is what you accuse the other people of,” he added. Hitler’s first campaigns lambasted the corruption of the Weimar Republic and of Jewish bankers, and the presidential campaign of Brazilian President Jair Bolsonaro similarly emphasized corruption, despite the rampant corruption under his leadership.

Another pillar that Stanley focused on was unreality, or the eroding of the very concept of truth. Often, distrust in the media is galvanized simply for the purpose of eroding a common basis of fact, he argued. Stanley summarized one common Nazi refrain as, “The Jews control the media, and you know this because of the fact that they’re not reporting on the Jews controlling the media.” He linked this sentiment to Trump accusing CNN of being controlled by President Obama because of their unwillingness to report on his conspiracy-laden scandals.  “If you put all things on an equal platform, giving equal credence to each, people will lose all sense of reality,” he said.

The last pillar on which Stanley spent significant time was sexual anxiety. He found that fascist societies consistently accused the out-group of committing sexual assaults. “There was a rally of 10,000 people in New York City in 1924 protesting the Black Horror on the Rhine – supposedly black Senegalese soldiers were having children with white German women. And Hitler said, the Jews are behind this,” he said. Today, immigrants in the United States and Europe are often accused of sexual assault, and the media disproportionally circulates these claims. Stanley noted that the Austrian Nazi Party ordered the police not to speak to liberal media sources except regarding a sex crime by an immigrant. He also accused Sinclair Media Group, an American television broadcasting company, of amplifying similar occurrences to stir fear.

Indeed, America’s support for fascism was a common thread throughout the discussion of each pillar. Sometimes, this support was overt: in 1939, a large “pro-American” rally in New York City descried the influence of the “Jewish Media.” At the center of the rally was a 50-foot picture of George Washington, covered in swastikas. “The United States had a thriving fascist movement, and it was intermingled with emblems of US patriotism,” Stanley said. Even absent these blatant displays, however, he sees American fascism as on the rise. “From 1928-1945, there was a ‘fascist internationale,’” he said. “Right now, it’s almost a mockery of the past. Now there’s a ‘national conservative internationale.’” This does not mean that fascism vanished in the intermediary period, he added. “It never went away, but now we are seeing its resurgence not just here but worldwide.”