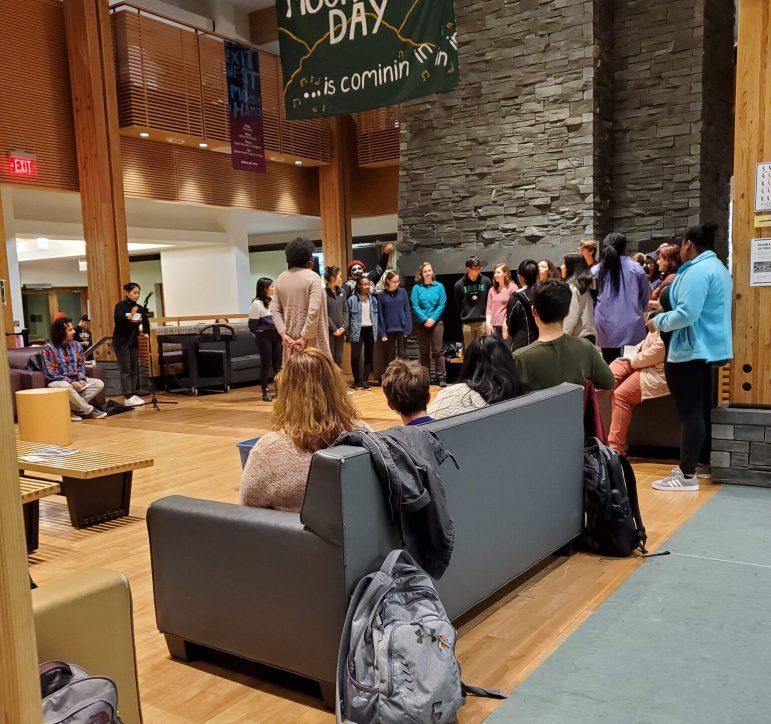 A vigil for immigrant rights included a performance by the College’s gospel choir, as well as an open mic. (Photo courtesy of Tania Calle.)

Students from the Coalition for Immigrant Student Action (CISA) and the Williams Gospel Choir, alongside Chaplain to the College Rev. Valerie Bailey Fischer, held a vigil on Thursday to honor the lives lost at the U.S.-Mexico border.

During the ceremony, which took place in Baxter Hall, CISA members shared stories of immigrants who have recently died while attempting to cross the border or while being held in custody at border detention centers, including the story of Oscar and Angie Martinez, a father and daughter who drowned while crossing the Rio Grande after spending two months seeking asylum in a migrant camp in Mexico.

The event also included a prayer from Bailey Fischer, a performance by the Gospel Choir and an open mic session where several students shared poetry, stories and thoughts on the effects of U.S. immigration policies and  dehumanizing national discourse.

The vigil was part of CISA’s larger initiative to create campus consciousness and foster dialogue surrounding immigration issues, which its leaders believe will help promote student advocacy and action on a broader level. “Debates over immigration occur at the local, state and national levels,” CISA co-chair Tania Calle ’20 explained. “So after people become aware of what is happening, we hope to provide them with an opportunity to engage in direct-action, phone-banking, letter-writing and/or public demonstrations.”

Among these opportunities is an advocacy campaign for the Family and Work Mobility Act in Massachusetts, part of a CISA collaboration with the locally-based labor rights coalition Jobs for Justice. “The passage of [the Family and Work Mobility Act] would allow all Massachusetts residents, irrespective of immigration status, to apply for a driver’s license,” Calle explained. “Given that there are 255,000 undocumented immigrants in Massachusetts who need to drive in order to get to work, school or medical appointments, we feel very proud to contribute to such a project.” Calle added that the club will hold a phone-banking session on October 20 from 4-6 p.m. for those interested in promoting the legislation. CISA also plans to table for an “I Stand With Immigrants” campaign, create an art installation and host a number of cultural events throughout this month.

Above all, CISA hopes the vigil and upcoming events will raise campus awareness of the gravity of immigration issues and their effects on immigrants and their families, both at the border and across the country and the world. “We want people to think critically about what is at stake,” Calle said. “What is the validity of the proposed measures to ‘deal’ with immigration issues and at what costs are these measures being taken?”