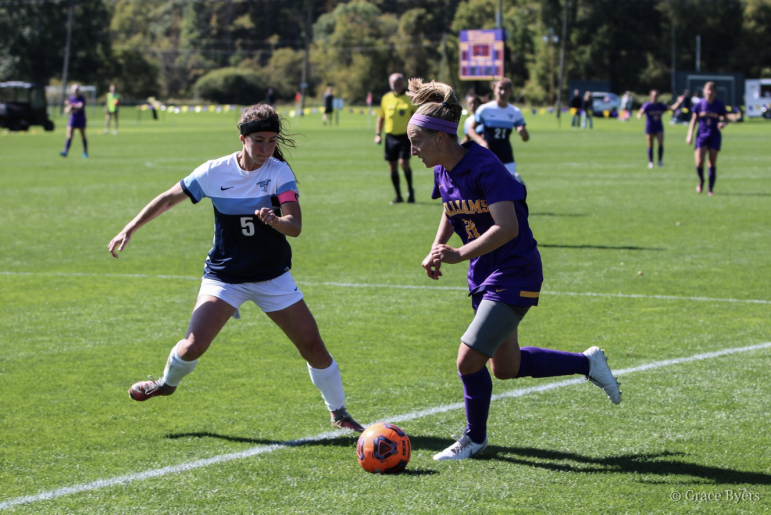 While the Eph midfield remained in possession throughout the game, a 17th-minute goal from forward Rain Condie ’22 was the lone score.

Midfielder Aspen Pierson ’21 set up Condie’s goal with some strong dribbling on the left side of the penalty box. Pierson beat her marker and picked out Condie just outside of the 6-yard box. A Mule defender blocked her first shot, but Condie slotted the rebound into the bottom-right corner to give the Ephs the lead.

The goal was Condie’s second of the season, tying her total from last year. Pierson collected her third assist of the year, moving into a tie with Claire Tolliver ’23 for the team lead.

The Mules’ best chance of the first half came in the 25th minute, when forward Juliette Nadeau sprinted behind the Ephs’ back line. Nadeau shot early, but her attempted chip sailed over the crossbar.

The Ephs took their 1-0 lead into halftime, outshooting the Mules 8-2 in the period. Colby senior goalkeeper Dani Lonati made 6 saves in the period, while goalkeeper Leyla Kamshad ’23 did not face a shot on goal.

In the second half, the Ephs’ attacking players got forward to create several chances.  However, the Mules, backed by 7 saves from substitute goalkeeper Shannon Gray, defended well to keep the Ephs from extending their advantage. Forward Alison Lu ’20 was active in the second half, getting on the end of her teammates’ feeds, but was not able to score.

In the 50th minute, Tolliver played Lu through, but Lu’s shot from the right side of the box went over the bar. Lu also hit the crossbar in the 69th minute after she beat the defender to a loose ball in the box. Tolliver had a chance of her own in the 64th minute, but Gray made the save and two Eph shots were deflected, resulting in a corner.

Williams finished with a 19-5 edge in shots. Kamshad saved the 3 shots on goal she faced in her collegiate debut.

“We had a much better second half than first,” head coach Michelyne Pinard said. “We are at our best when we are reading, not reacting to, the play. That was the difference. We were quite dynamic in the second half, [and] it was fun to watch.”

This marks the fourth straight win for the Ephs and their third consecutive victory in the conference. The women currently sit atop the NESCAC standings, although Middlebury, which is two points down in second place, has played two games fewer than the women.

With the team seemingly finding its rhythm after a difficult stretch in mid-September, Pinard said she hopes the team can keep making strides.

“I’m excited for the team to continue to improve each day, each week with the goal of playing as long as we possibly can this fall,” she said.

The women return to Cole Field on Saturday to take on Farmingdale State at noon.