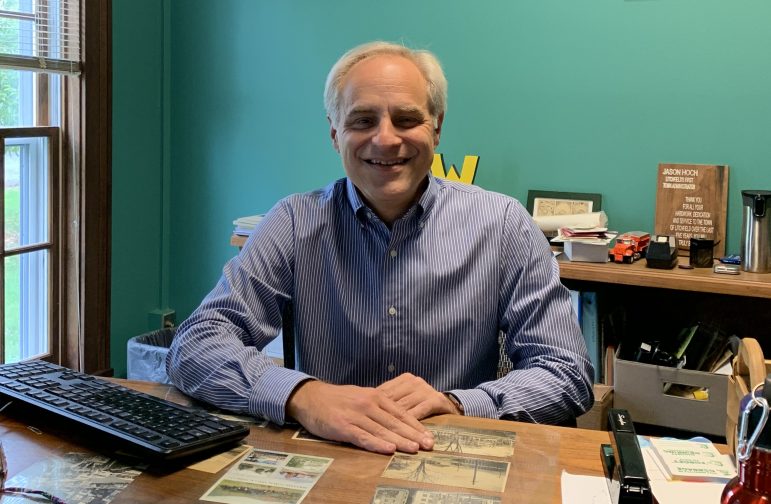 “I was one of those alums who was here every year for something, so I was never far away,” Jason Hoch ’95 said. “I probably spent 10 years or so as a class agent. I have watched Williamstown change, evolve and grow for more than 30 years at this point, going back to the first time I arrived as a junior in high school.”

The Friday of his 20th reunion, the Williamstown Select Board gave him the opportunity to return for good when it offered Hoch the job of town manager. In that role, Hoch has overseen the town’s day-to-day operations and executed policy decisions for the past five years.

After graduating from the College, Hoch did local government and nonprofit work throughout New Hampshire. He also studied city planning at Cornell and completed a certificate program for senior executives in state and local government at Harvard’s Kennedy School of Government.

“I was a political economy major, and I dabbled in a handful of things, some of which would prove to be helpful later,” he said. “A couple semesters of trail crew prepared me well for understanding having a public works department and road-building. I was president of the Williams Democrats, which was a great way to get out into the community.” He became briefly involved with Williamstown governance through Environmental Studies 302, in which he analyzed the impact of the residential exemption for property taxes.

Hoch said he thoroughly enjoyed his time at the College, especially for its intellectual culture and natural surroundings.

“I grew up in the suburbs, so suddenly being in a place with mountains around me where I could walk everywhere — I didn’t know how much that would mean to me,” he said.

After Cornell, he ran a Main Street redevelopment program in Littleton, N.H. for a year and then transitioned to a local government job in the same town.

Being in local government has allowed him to directly address problems in a way he said he finds satisfying.

“Towns the size of Williamstown and the towns I’ve served have been smaller than 10,000 people, so there aren’t a lot of layers,” he said. “You’re directly connected to all of the staff and the people you’re serving in the community, so you can really pull everything together.”

For Hoch, the presence of the College magnifies the quality of life in Williamstown beyond other towns of its size. He said he finds working on projects related to the College “intellectually interesting” and appreciates “all the great things about living in the community here and having access to the programs of the College.”

In his time as the Williamstown town manager, he said he is proud of how he has worked to strengthen the town’s relationship with the College and to facilitate student engagement with the town.

“We had a student who took over town hall for an art exhibition and convinced many of the visiting art faculty either to create pieces for the space or exhibit there,” he said. “It was kind of fun — I love that opportunity to engage students with what we’re doing in perhaps some unexpected ways.”

But living in a town where a college plays such a big role comes with its unique challenges.

“I had worked for 20 years, and it wasn’t until I came to Williamstown that I got a complaint letter with footnotes,” he said.

The perhaps overzealous civic engagement aside, he said he is now the happiest he has been with a job.

“I love that there are times both in my work and outside of my work that I’m able to give something back to the College and to students today,” he said. “I’m never going to be one of those spectacularly wealthy alums who can write big checks, but I’m hoping through a lot of small ways I can do my part to make a difference, too.”

With his senior-year dorm in Greylock Quad just across the street from his office, a glance out of his window is enough to remind him of his time at the College.

“Every now and again it just kind of grabs me,” he said. “I’ll look up from my desk and look over, and there’s Mark Hopkins. My first project in local government was for the town of Williamstown. I had no idea at that point that I was going to be in local government or in Williamstown doing that work. It took me 20 years to get across North Street.”